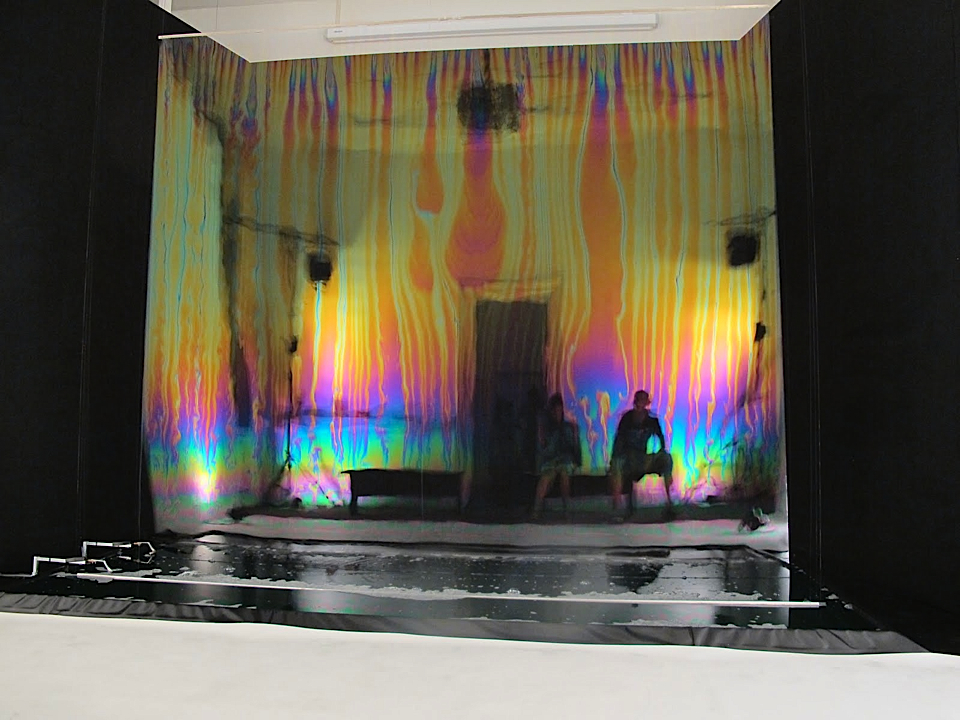 Visiting the exhibition ‘Low Tech’ organized by Exit at MAC Creteil in Paris we we’re taken on a joyride from dimension to dimension. Feeling welcomed by an optimistic atmosphere amongst a crowd of people that were interacting with the installations, figuring out how the surreal animations are made and planning their own DIY projects inspired by the works on display.

Twenty projects from international artists and designers filled several spaces and corridors, creating a sense of adventure while walking through the building.Inspiring all to pick up our digital camera’s and hammer and nails at the same time to create a hands on future in this digital era.

Pop down screen.Nicky Assmann’s project ‘Solace’ is a kinetic light installation, a screen made out of soap, created by a handcrafted device, is lit and mesmerizes visitors by showing them a colourful liquid surface which randomly pops down.

As it’s a looping process, the excitement of the screen appearing and disappearing creates constant changes of atmosphere.

Playing with perspective.‘The Tenth Sentiment’ by Ryota Kuwakubo is a playful installation that let’s us experience an intertwining of the second and third dimension. A train, with a LED light attached on the side, slowly moves on a track, passing various objects and creating shadows on the walls. Visitors are able to imagine the viewpoint from sitting in the train while at the same time having an overview of the whole scene.

Ryota Kuwakubo places us in various dimensions by playing with perspective and scale. The video above shows the installation as well as an interview with Ryota Kuwakubo himself in an episode of the documentary Jap_ON.

In between reality and animated narration. A collection of videos were projected in a small cinema-like setting.

These two films in which stopmotion and motion footage are mixed create an imaginative world within our existing world, taking us somewhere in between.