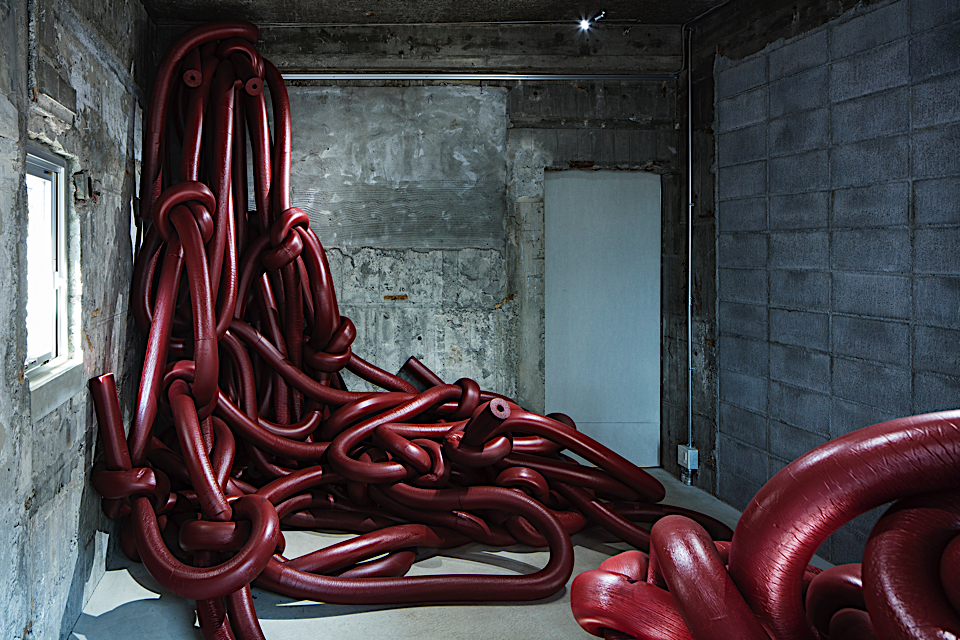 Japanese artist Rikako Nagashima gained recognition through her “Musubi” installation that represents the idea of “tying together” and the name “Musubi” means just that in Japanese. The installation served as homage to the artist Anish Kapoor that had been requested by the curator of the exhibition. Even though we can recognize the inspiration drawn from the artist when it concerns scale, color and intention there are unique diversities in her art, which are closely connected with her female background growing up in a Japanese society sharing its culture and religion.

Here is how Rikako explains her story and inspiration behind her installation:

“Anish Kapoor is said to be an artist of dichotomy, and his works convey the concept of dichotomic existence such as happiness and sorrow, life and death, beauty and ugliness, and good and bad, that reflects life and religions in India. In addition to the aspect of dichotomy, I felt a sense of masculinity in Kapoor’s work, perhaps because of the massive impact of the large object erect against gravity. Since I also found that his philosophy has some affinity with the Eastern philosophy of Yin-Yang, I conceived an idea to create an installation that would counter the strong existence of his work with reference to the concept of Yin-Yang. Just like the way Kapoor’s work is closely related to life and religions in India, my idea is to express dichotomies reflected in life and religions in Japan, with a focus on reality that I face as a woman. “

“In Early Jomon period in Japan, people started making clay figurines of women, which indicates the beginning of the Mother Goddess worship. However, in the Middle Jomon period, people started breaking the clay figurines they made. According to a theory, an act of cultivation of crops that started around this period did harm to the earth or the bodies of Mother Goddess, and people wished to grow crops out of the bodies by breaking them. In my view, the clay figurine, which accepted the act of breaking and natural course of all existence, is associated with the woman’s womb signifying the receptive nature of the female gender. (…) A womb can conceive a life, regardless of whether a woman wishes or not. On the contrary, humans think and make decisions between good and bad, or whether to keep or kill a life. (…)”

“The commonly used Japanese word for “bear/give birth to”, umu can alternate with a word musubu according to a traditional definition, which is a word commonly used for ” tie together “. Originally, the word musubi (tying / a knot) comes from a word musu (to grow / to develop) combined with a word hi (mythical power), and the act of tying together signifies people’s wishes for succession and prosperity of life. (…) Since ancient times, people pray to Musuhi gods for succession of life in Japan. Generations of musu-ko (born boy = son) and musu-me (born girl = daughter) were born from the body of the Mother Goddess (earth), and as a consequence, we all came into existence today. The circle of human life in this world –– multiple repetitions of lives being tied together and separated, being born and dying –– is exactly like the way how the womb has accepted everything beyond what is good or bad. At the same time, there are also numerous women who made difficult decisions not to join this circle under various circumstances.”

“What I created as an homage to Kapoor is meant to be broken clay figurines –– or my silent determination to accept dichotomies of all existence, humbly presented to the artist with my prayers. The will and voice of my body told myself to behave like a womb without questioning good or bad, while constantly transforming like water –– and our efforts resulted in this ever-transforming installation created through the continuous act of tying. “

Rikako is known for using the female body as inspirational sources for her installations, which for some might be experienced as provocative or even disturbing. It is the search for the natural truth in her art that makes audience react differently when interpreting her work and for some her “Musubi” installation might reassemble tangled blood vessels.

For Rikako the connection with the female body in her latest installation is strong :

‘There is blood that is seen every month, there’s monthly pain, there’s pregnancy, abortion, childbirth, and various occurrences that happen within a woman’s body. Because there is pain, there is relief. Because there is discontent, there is happiness. Because there is death, there is life. While being unconscious, you become conscious. The woman’s body is wrapped in this experience of Yin-Yang, so it became the basis for this piece. (…) Although the audience will interpret the work in various ways, my goal was to create a piece where you can tangibly come in touch with this natural truth. “

I want the people who live only believing the truth of one side to pause and consider that the other side also exists, but that either side can not exist without the other.” 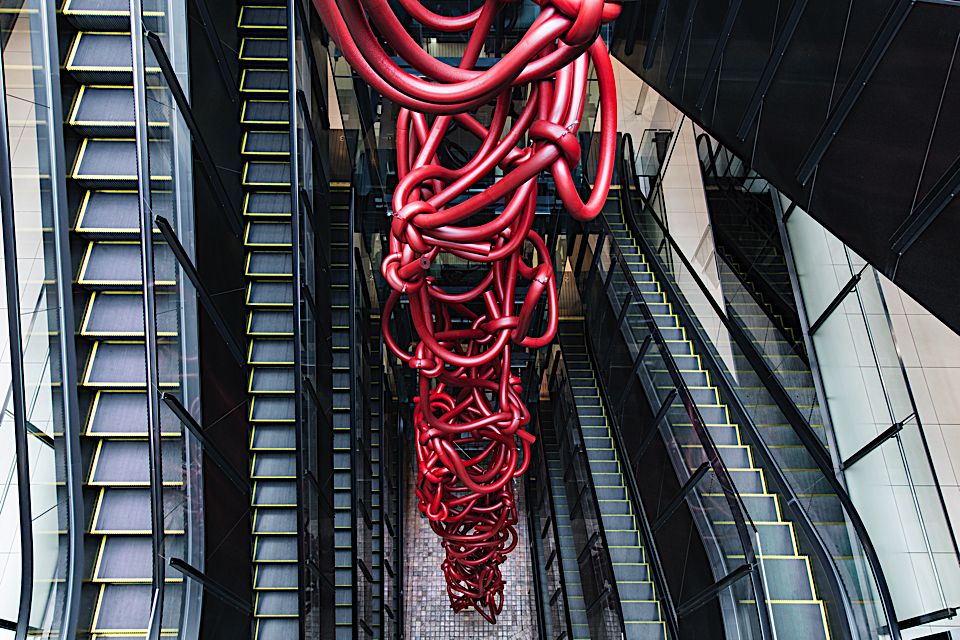 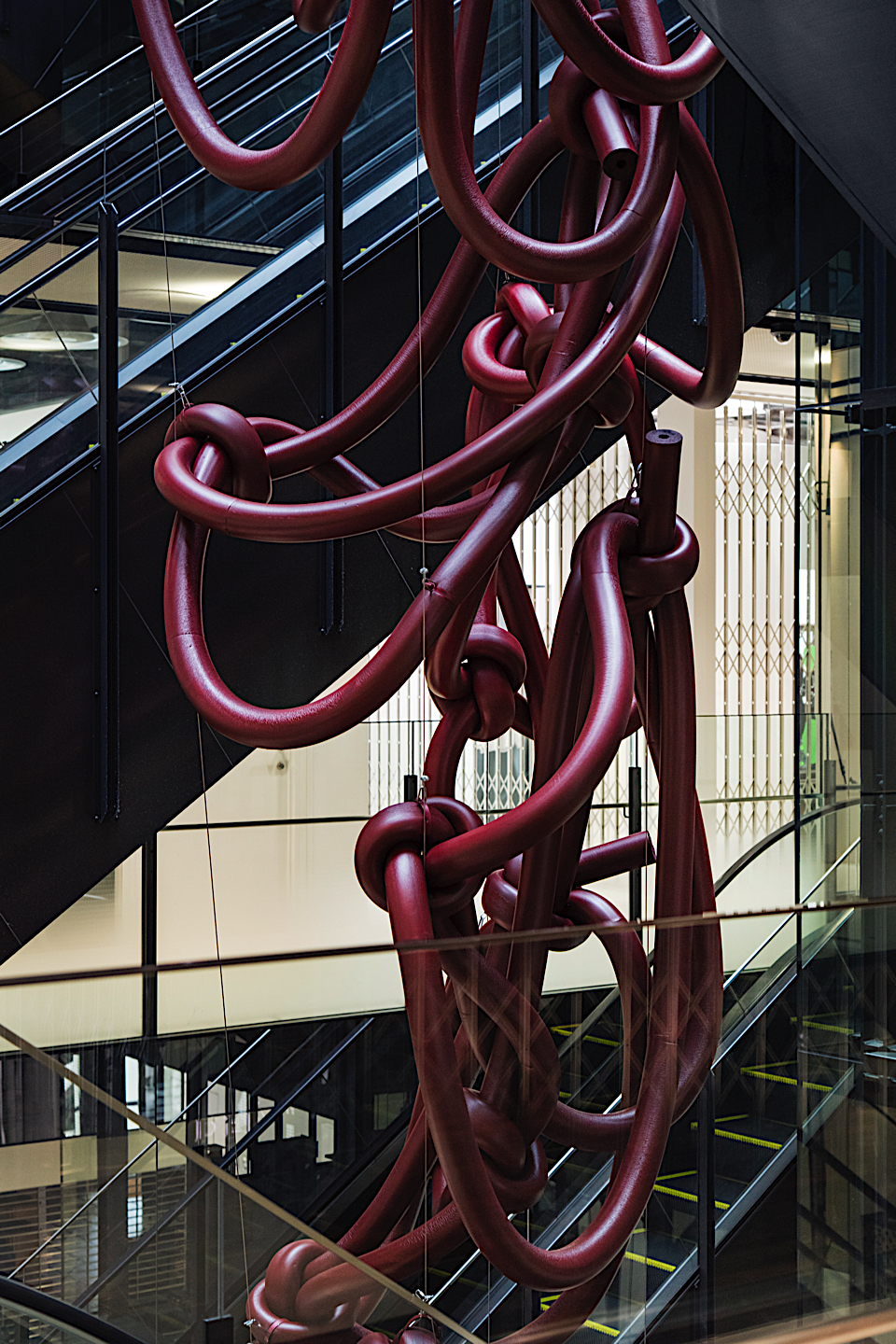 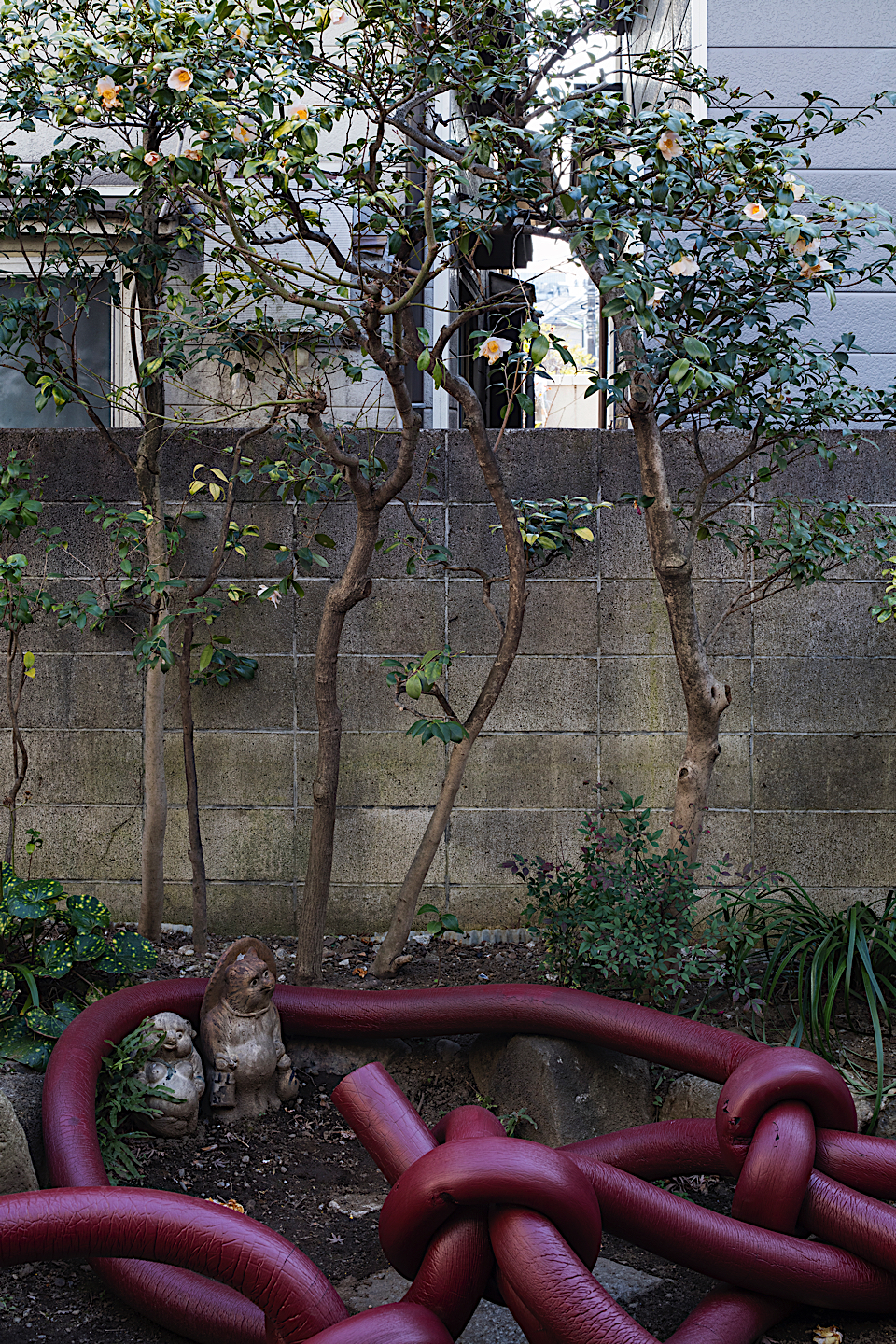 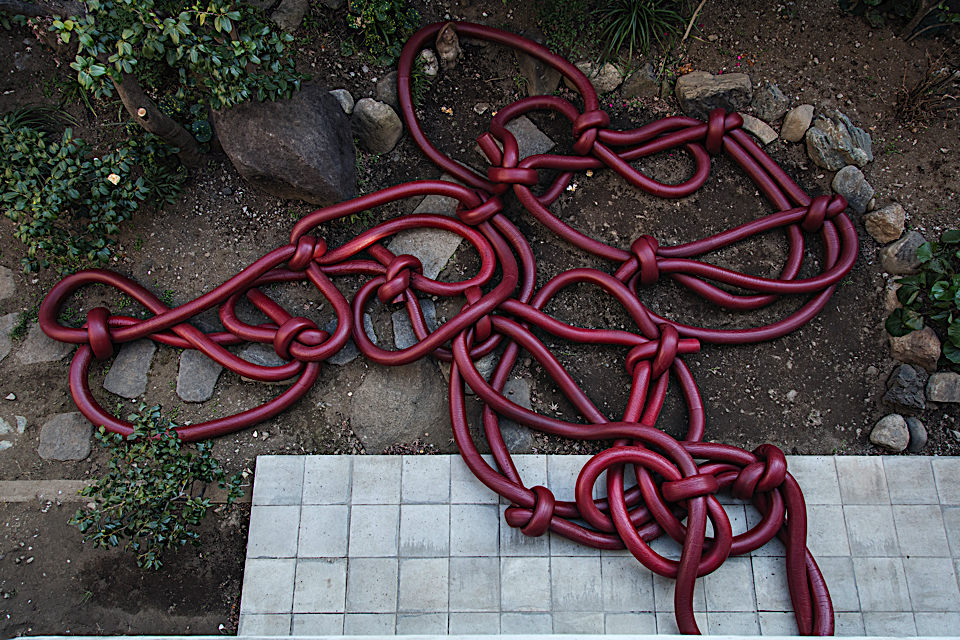 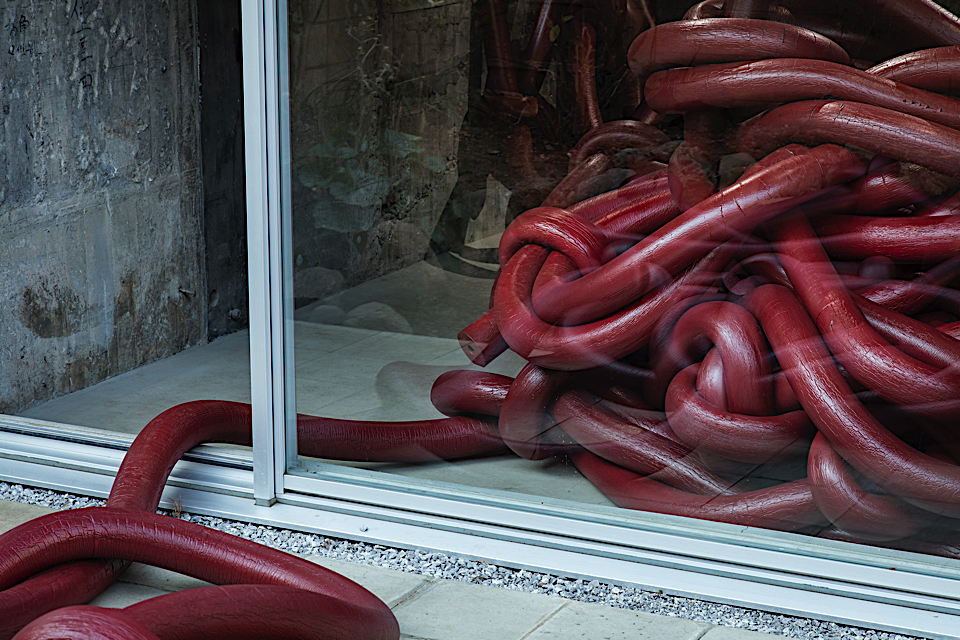 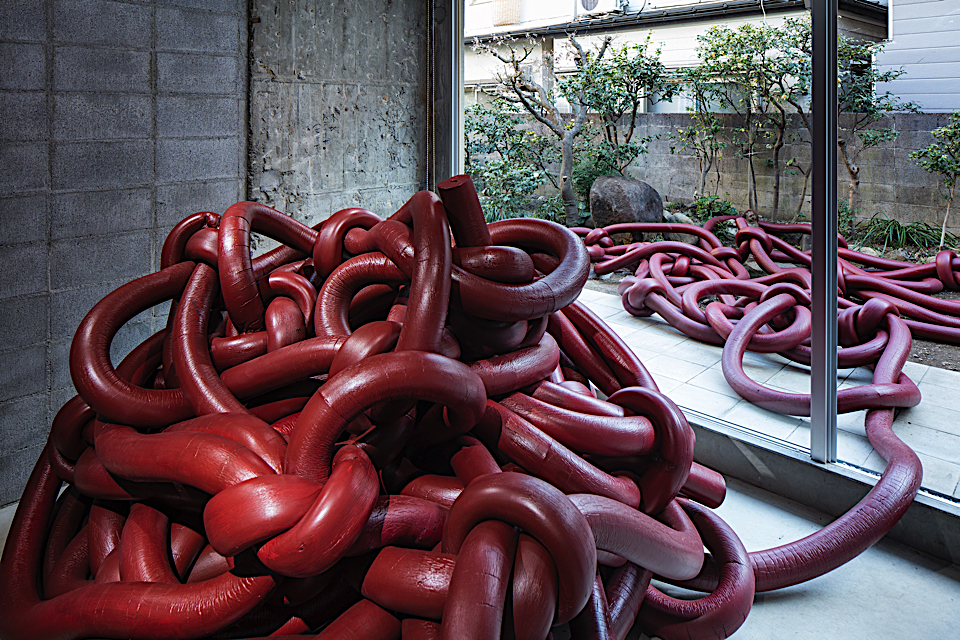 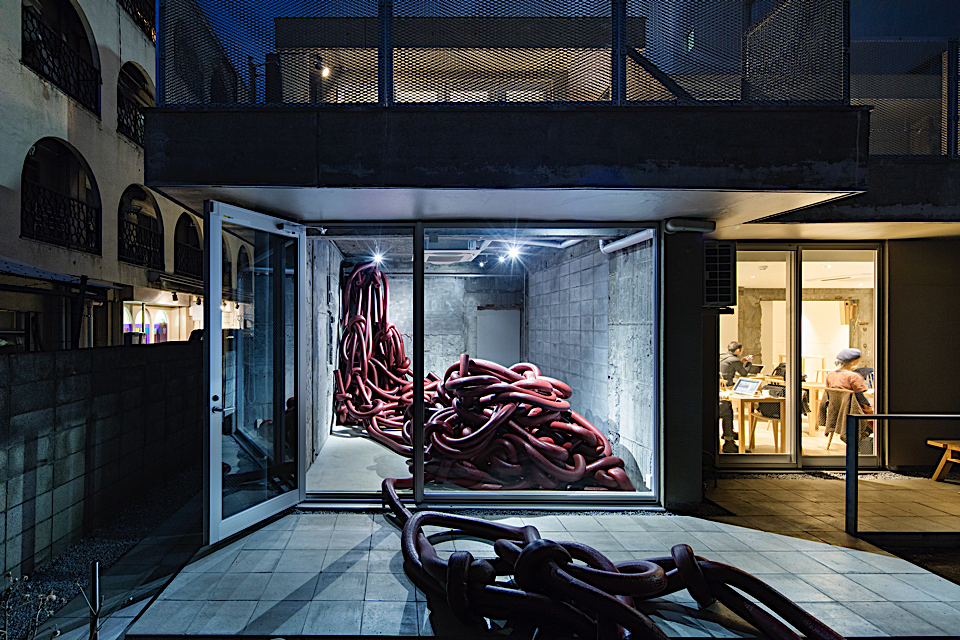 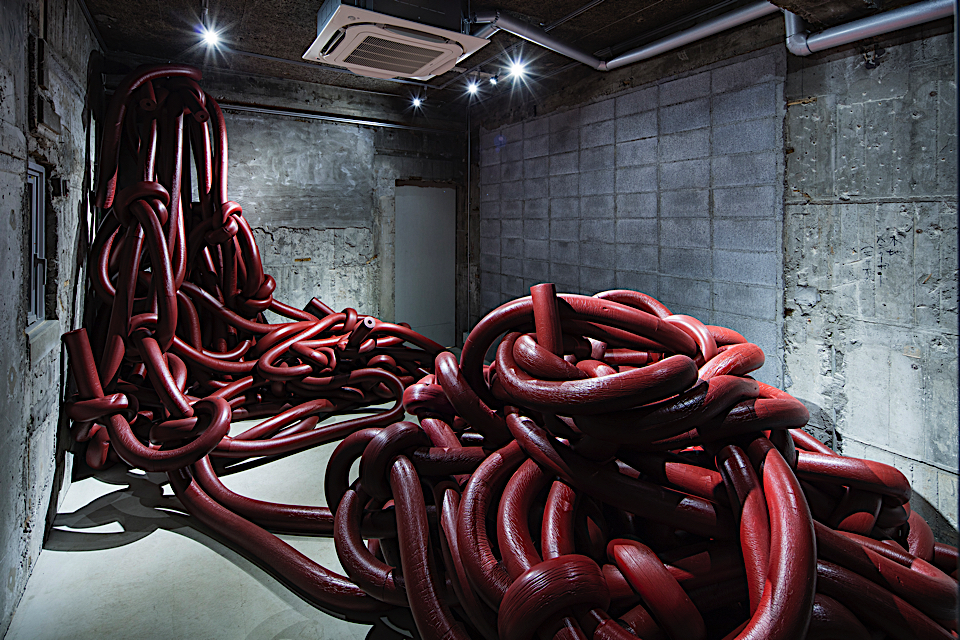