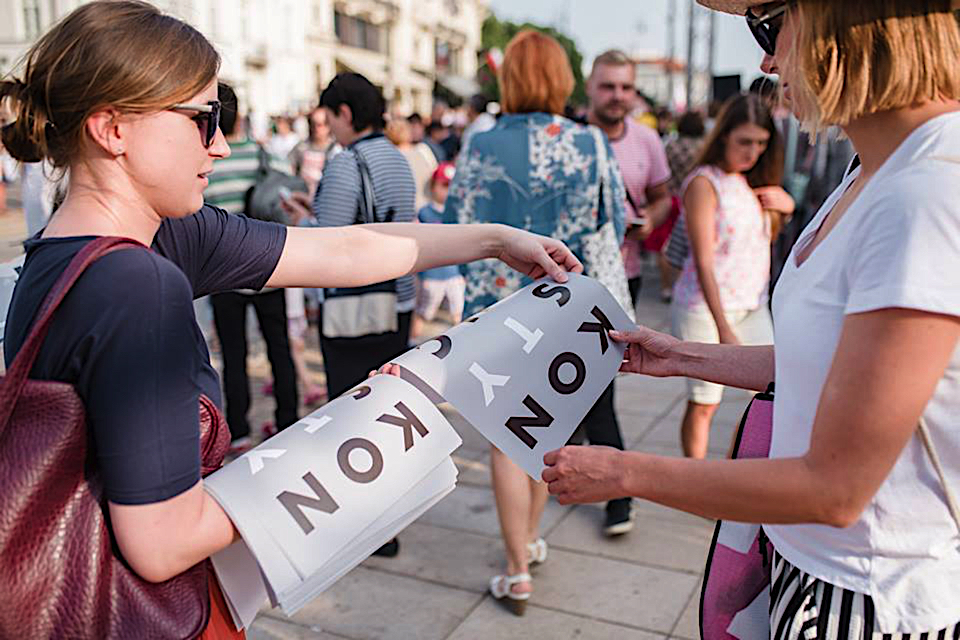 How a simple poster became a viral symbol of protest

Luka Rayski is a Polish artist, illustrator, and designer. In 2016 he was asked to contribute a piece of work on the subject of democracy to a project called Demokracja Ilustrowana (Democracy Illustrated). The poster he designed has rapidly become the ubiquitous symbol of the resistance against the expanding influence of the far right in Polish politics. Rayski’s design brilliantly deconstructs the word konstytucja (constitution) highlighting, in the colors of the Polish flag, the words for “you” and “me” hidden within it. This simple, universal message of unity has proved to have broad appeal across a huge cross section of the Polish population.

Christian Petersen: Can you give a synopsis of the current political situation in Poland for people that might not be aware?

Luka Rayski: There’s many similarities to the current US situation. Far right populists came to power and they’re dismantling the rule of law. The nation is divided in two. The half of the country my friends and I are in is scared shitless, scared that we might lose freedoms and rights the generation before us fought for.

CP: How you you describe your own political interests?

LR: I don’t have a favorite political party. I only have a couple of least favorite ones. I’m a proud EU citizen. I read and think about politics a lot.

CP: How young were you when you first became aware of the concept of “politics”? Was there a specific event?

LR: In 1991, when I was 9, I was spending the summer at the seaside in Poland when the Soviet Union collapsed. I had no idea what it meant, of course, but I remember seeing my parents and their friends bent over the new map of Europe that came with the newspaper. They were very emotional and I knew that whatever was going on, it was more than important.

CP: When did you first recognize the concept of “graphic design”?

LR: Both of my parents and my only sister are graphic designers so it was always hard for me to imagine life without that concept. However, all the distinctions such as drawing vs. painting, art vs. design, bother me. I believe categories sometimes limit your freedom.

CP: When did you first start to experiment with graphic design?

LR: I did stuff since I was a kid. I started working with clients around 2002. I’ve been working freelance since then.

CP: Poland has an incredible, unique tradition of design and illustration. Why do you think that is? What aspects of that tradition have influenced your own work?

LR: It’s true! My guess is that during the communist era (WWII–1989), state censorship pushed artists of all genres to be smarter than their censors. A lot of thinking had to be put into the work so it could outsmart them. Designers had to “smuggle” ideas into their work. You have to develop great skills to be capable of delivering a speech with your mouth shut. And so we have a paradox: captivity has fueled freedom of expression.

CP: Can you name a few of you favorite polish designers/illustrators?

LR: There’s too many! Henryk Tomaszewski’s posters and drawings are brilliant. His student and my stepdad Mieczysław Wasilewski obviously had the greatest impact on me. From my generation, I want to name Edgar Bąk, a friend and an outstanding graphic designer who, along with Marianna Grzywaczewska, runs Demokracja Ilustrowana and helped preparing the grey background version of the poster.

CP: When did you first make work that you would define as “political”?

LR: Everything is political. There’s no escape from that. Every time you go out and interact with other people, it’s political. Same with putting your work out into the world. In the more strict meaning of the word “political,” I never make anything that would try to support any group in political power specifically. I think of the konstytucja poster as my emotional commentary on politics.

CP: When and why did you decide to make the konstytucja poster?

LR: It was in the summer of 2016, when Marianna Grzywaczewska asked me to contribute to her project called Demokracja Ilustrowana. The invited artists were asked to design a poster on the topic of democracy.

CP: Can you explain a little about the idea behind the poster and its specific graphic layout?

CP: How did you distribute it?

LR: That’s the most amazing part of the story! It was all team work—it started with my friend Mateusz Halawa who fundraised and printed tons of the poster. The first night, in front of the Senate we discovered that instead of taping it to walls it worked much better if we handed it to people.

CP: When did you first start to realize that its popularity was spreading?

LR: That first Friday night at the Senate demonstration, we distributed seven thousand copies within a few hours. The next day my friends were ready with three times that. Every day more copies were being printed thanks to the generosity of regular people. Then the Gazeta Wyborcza (a daily newspaper) put it on its back cover—which was another 50,000 copies. We decided to give the poster a Creative Commons Zero License, meaning anyone can do anything they want with it without asking for permission. Last time I checked we had 12,000 downloads of the print-ready .pdffrom demokracjailustrowana.pl. It spun out of control.

CP: Why do you think it’s been such success? Why have people embraced it so strongly?

LR: The “constitution,” “you,” “me” pun is very capacious. It appeals to hipsters, elderly people, working class, middle-class, intellectuals, all kinds of people. Nobody is excluded from the message it carries. The design and colors are very modest, and the format, A3, is in a nice dialogue with the human body. It’s a perfect “shield” for a protester. I was lucky to be given a chance to contribute to the cause, but first of all I’m grateful to the many people who made this possible: Marianna Grzywaczewska and Edgar Bąk from Demokracja Ilustrowana and Mateusz Halawa, who started and coordinated the entire action. The printing house people (who wish to remain anonymous) are real heroes. Their contribution fills me with hope in people.

`CP: Have there been any negative reactions to it?

LR: Some. Some people started posting hateful remixes of the poster—such us “prostytucja”(prostitution). It only ensured us that the design is powerful enough. Most of the hate mail made us laugh.

CP: Have you worked on any posters since that one? Do you plan to make more?

CP: Would you say that there a movement of similarly minded designers/illustrators/artists in Poland?

LR: I’m not sure, I see it as a rather fragmented community but I think it’s for the better. During the recent protests there has been a wave of really cool designs visible in the streets—many of them masterful and interesting, but very different from each other. Diversity!

CP: I don’t think that there’s such a strong living tradition for political art and design in the west anymore. Why do you think that is?

LR: I’m not sure I agree with you on this. I lived in NYC for a couple of years and many artists I met consider themselves activists. Maybe Poland is still far behind the west; our democracy is more fragile and our discourse here is more dramatic. Our slogans are more general and thus capable of uniting larger parts of society. In the US, where the constitution seems pretty unthreatened, there are many divisions on the left, and many controversies regarding topics such as identity politics. Some of those problems are lightyears ahead of Poland.

CP: What else are you working on?

LR: I am preparing my first solo show on Polish soil! The opening is in November in Szydłowski Gallery in Warsaw. It’s going to be just paintings. I’m very excited.

This article was previously published on ArtSlant 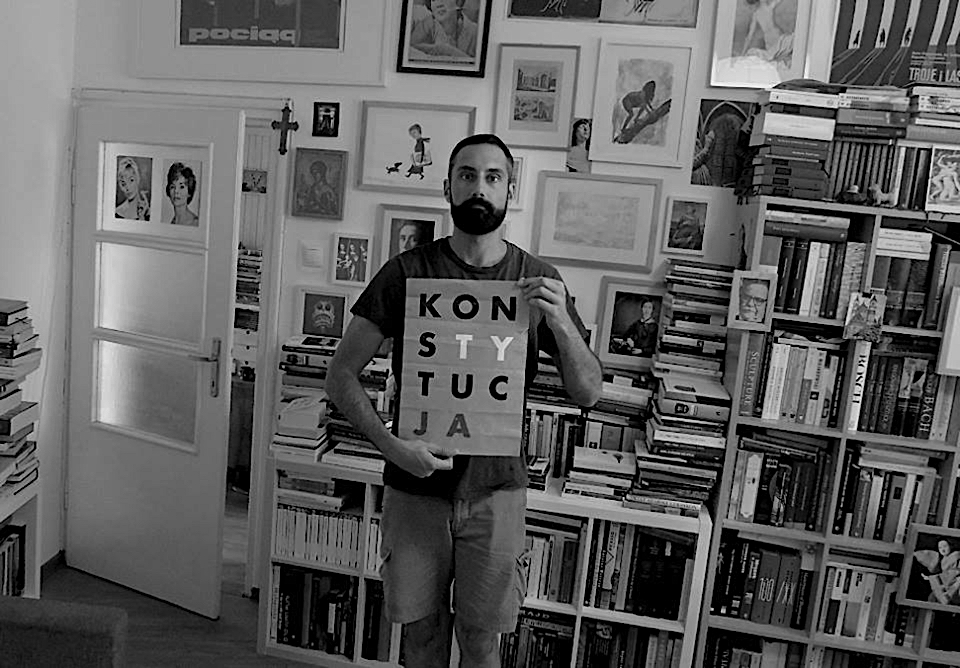 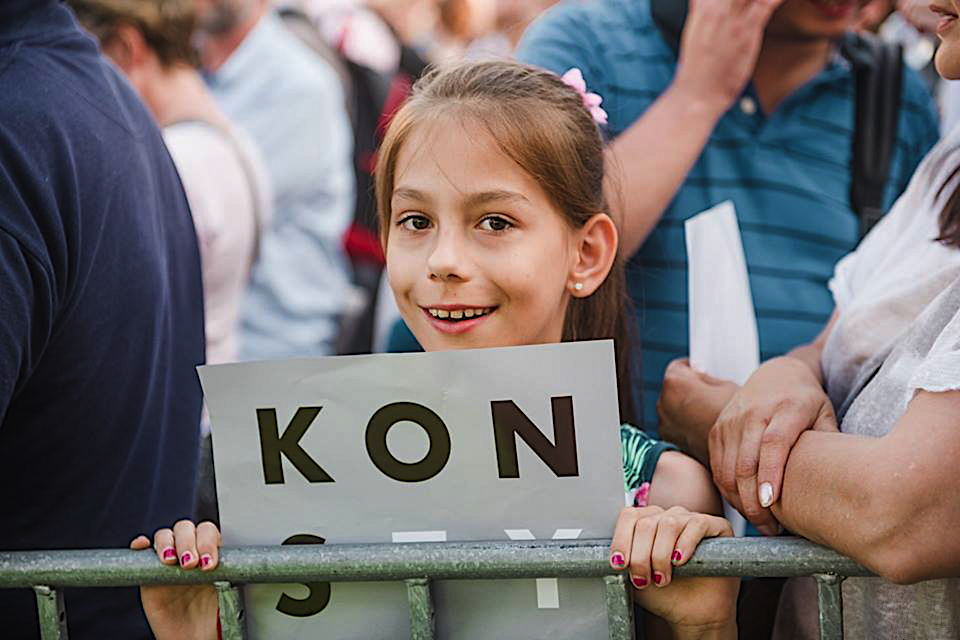 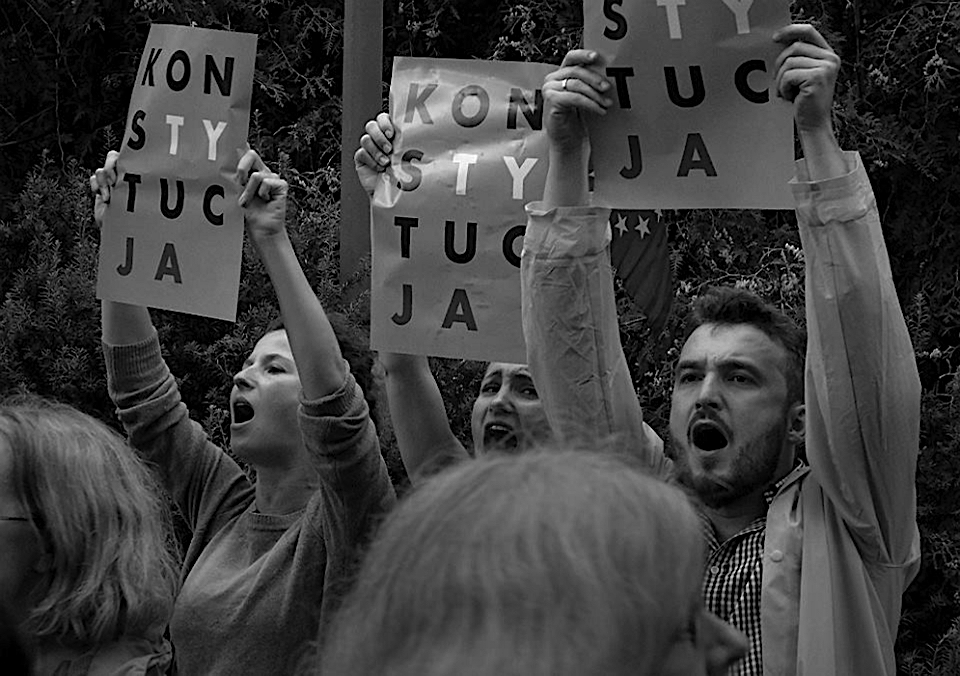 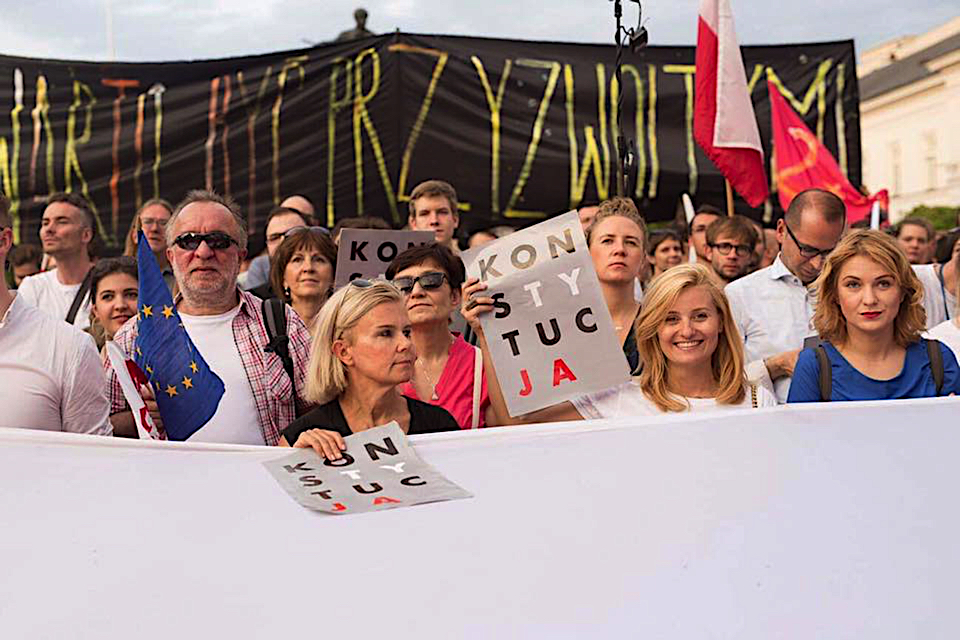 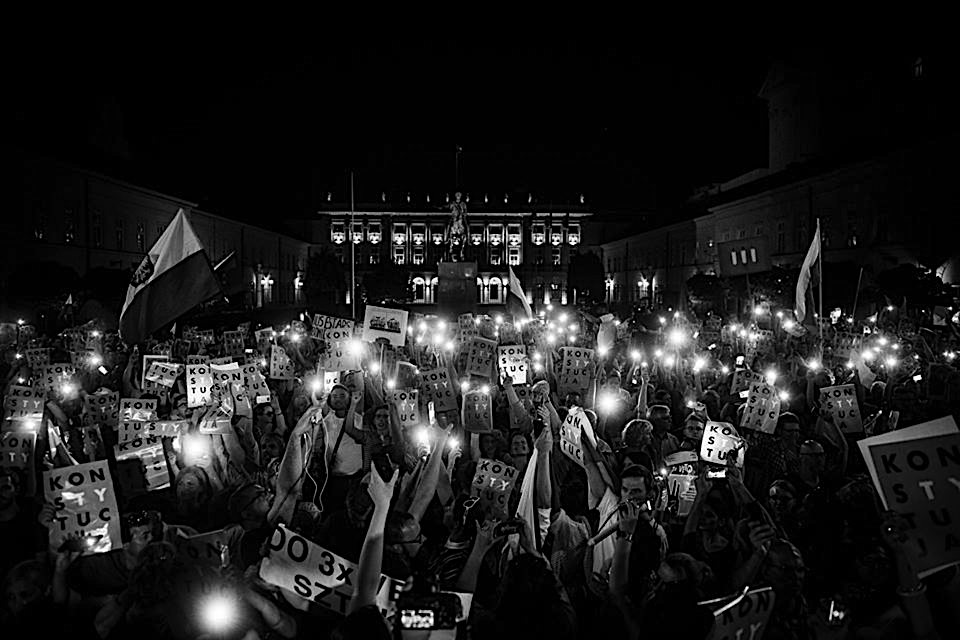 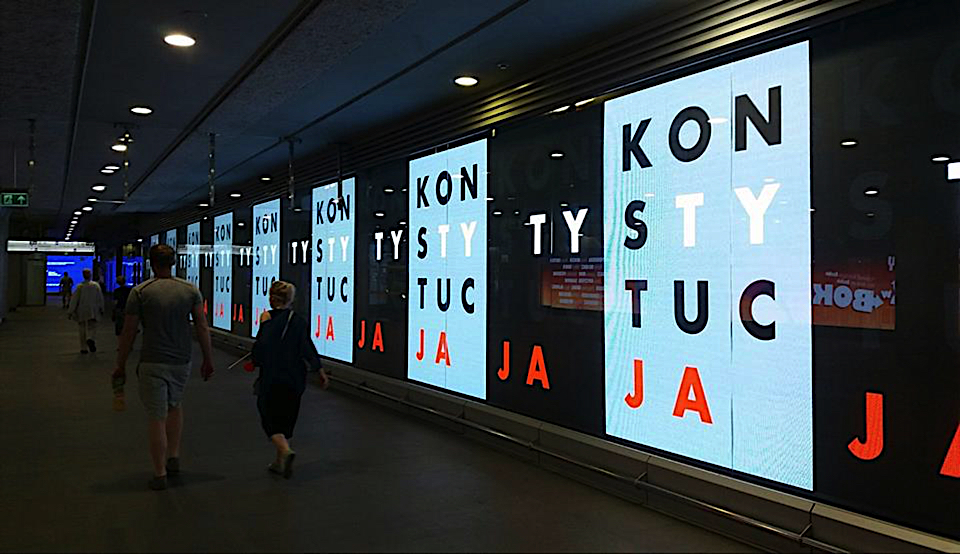 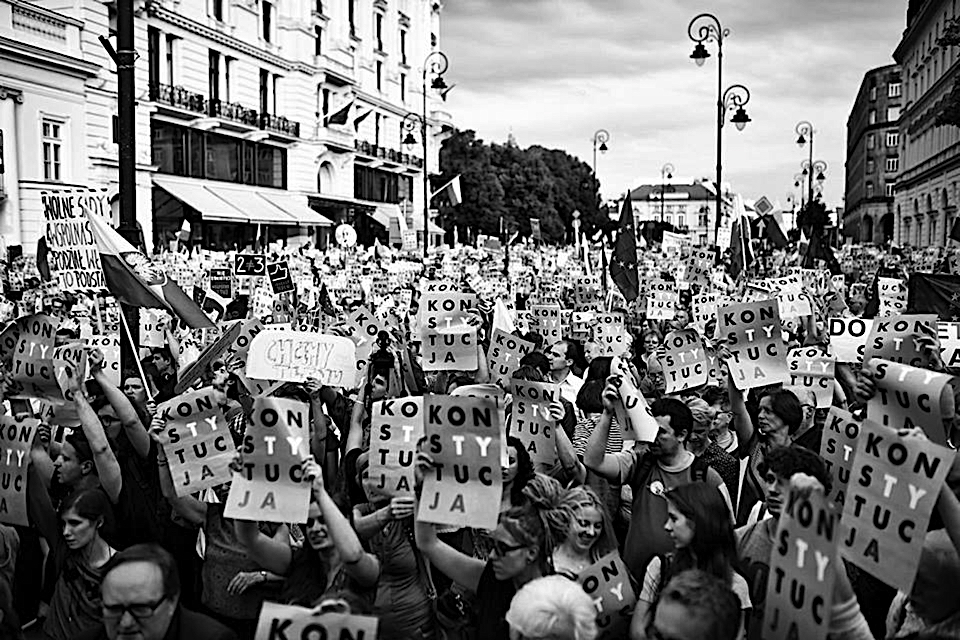 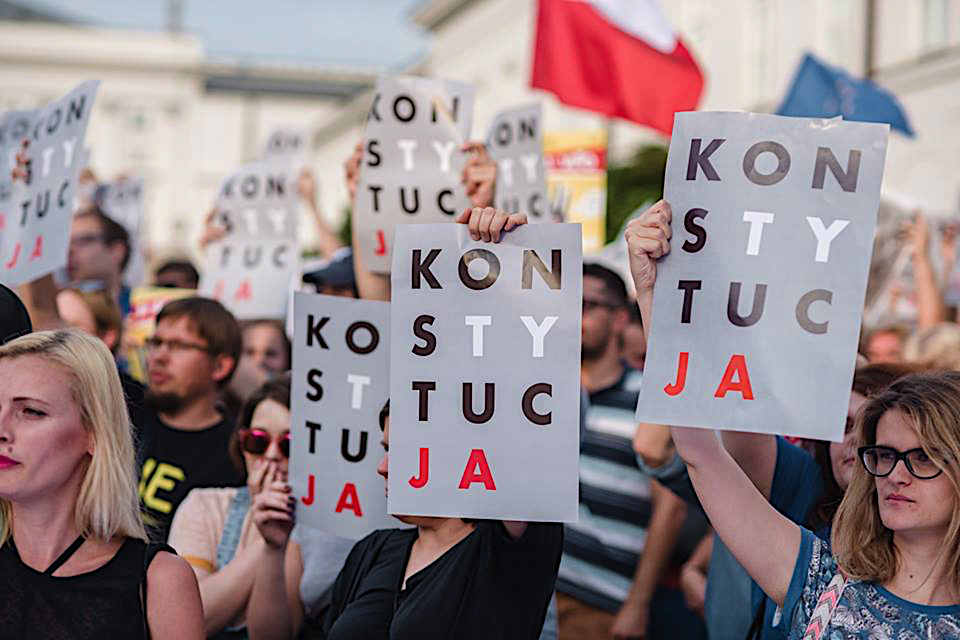