Through her work Siba Sahabi (b. 1979) shows how cultures can influence one another and how this exchange can lead to new expressions. She translates cultural heritage into contemporary design through an interpretation of both historical forms and concepts. She creates a wide range of centrepieces—from objects for the table such as vases and lamps to large-scale interior items such as room dividers.

Could you describe yourself as an artist in one word?
Poetic

What are the key elements of your work?
There are three key elements in my work: building bridges between Europe and the Middle East through design, making experimental applications of materials and techniques and the last one is finding interdisciplinary collaborations.
Through my work I show how cultures can influence one another and how this exchange can lead to new forms of expression, with a particular focus on the cultural influences of the Middle East on Europe. These two regions have been interacting with each other for millennia e.g. through trade, conquests and migration. And this is how ideas, knowledge and stories were passed. Once they were introduced into the other culture they were often adapted and refined. Think of the chess game. It was developed in Persia/India around the 4th century and was introduced in the 11th century to Europe via Italy and Spain. And it was in Spain during the 16th century when the most powerful piece, the queen, was introduced. This expansion of the chess game is still relevant today.

Most of my work is handmade and produced by myself. I admire crafts because the imperfection of handmade objects gives each piece a unique personality. I play with the perception on how we see material and how we expect it to be applied. My partition screen for example is based on elements made out of a mix of resin and chalk and look like concrete. And it takes a second glance to understand that my iconic vases are not made from clay but from felt.

I work on regular bases with photographers, cinematographers, composers, dancers and choreographers. I started to work with the media of film and photography because I wanted to express the context of my designed objects. Working with these media gives me the possibility to visualize my research in a narrative way. Collaborations are like a conversations; they evolve through the input of different ideas and perspectives.

Why are you so interested by rhythms , mathematic and construction?
I am fascinated by the history of art of the Middle East because it has developed based on different values compared to the European history of art. In respect to Allah – and his perfect creation of the world – the images of humans do not play a prominent role in Islamic art. And the central perspective had been absent for centuries in the Middle East. This is how other forms of arts like calligraphy, architecture, textile art such as Persian carpets have been far developed and highly regarded. In the Middle East there doesn’t exist a hierarchy between to the so-called ‘applied arts’ and the ‘fine arts’.
Distinguishable elements of Middle Eastern arts are geometric patterns which form intricate and complex structures, including a wide variety of tessellations. These patterns are often perceived as ‘abstract’ from a Western perspective because the ‘Western’ eye is used the central perspective that forms a relation between the position of the viewer and the motive of an image. To me Middle Eastern geometric patterns—which can be found for example at the famous Alhambra Palace in Granada—are an endless source of inspiration. For my wall devider and chess set I have translated a selection of geometric elements from two dimensions into three dimensions.

What is your last project about?
My series of side tables are named after the Greek mathematician Euclid of Alexandria—also known as the Father of Geometry. In 300 B.C., Euclid described in ‘Elements’, his treatise of 13 books on mathematics and geometry, the construction of a solid called ‘polyhedron’. My three side table are based on this particular solid, composed of flat polygonal faces, sharp corners and straight edges. Each side table is constructed out of four elements that consist of seven triangular sections which form both the surface and the legs. Through this geometric construction, the visual aspects of mathematics are translated into contemporary design.

Where do you find your inspiration?
There are different ways in which I find my inspiration: It can be while traveling, reading or visiting museums. Once I discover a story that triggers my imagination, I give myself the freedom to play with the historical material and finally translate it into a contemporary design. And design to me means interacting with the relevant themes in an attempt to express cross-cultural exchange both in space and time.

How do you begin a new project ?
I read and collect as many images that I can find about the specific topic that caught my attention. I then translate intuitively my first ideas into sketches and models. I prefer to model using paper instead of computer programs because this approach forces me to simplify the shapes.

How would you describe the relationship between colors, shapes and light in your works?
I love the (non) color black. Especially when working on geometric shapes with straight lines and sharp conners. Once the light hits the different surfaces in various angles it creates a natural palette of dark grey and black hues.
I have worked intensively on forms that evolved from circles: my felt vases are based on rotations. In the last years I’ve usually started my first sketches adapted from triangles.

What is your favorite place on earth?
There is one site in Southern Spain which I consider as the most striking and inspiring monument I have ever seen: the Mezquita of Córdoba. The complex building (mosque/cathedral) combines Middle Eastern and European architecture in its most beautiful form of expression. 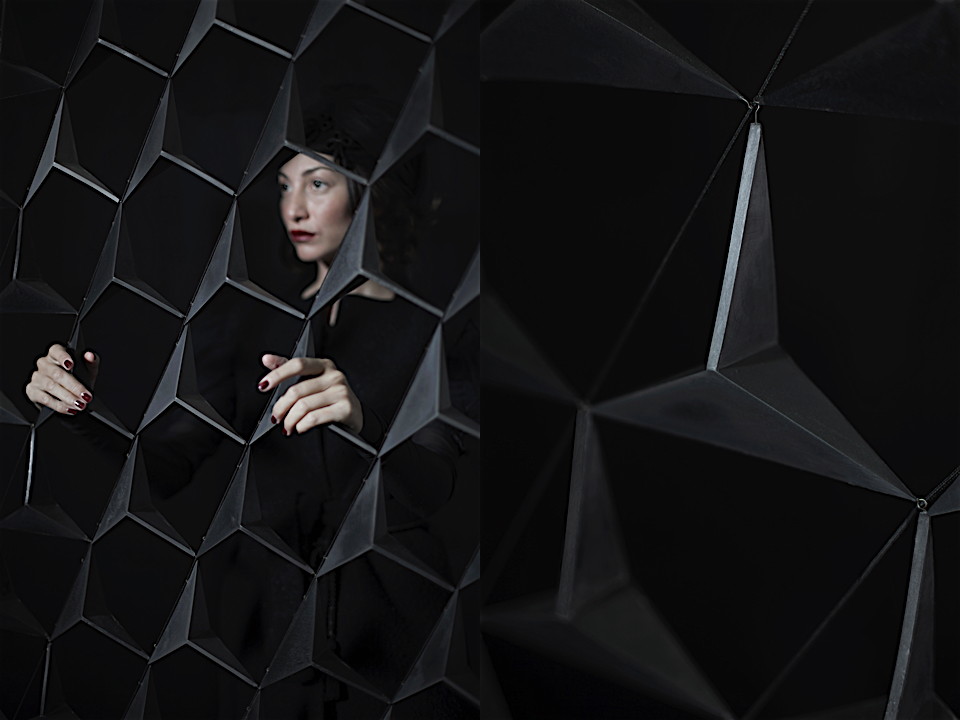 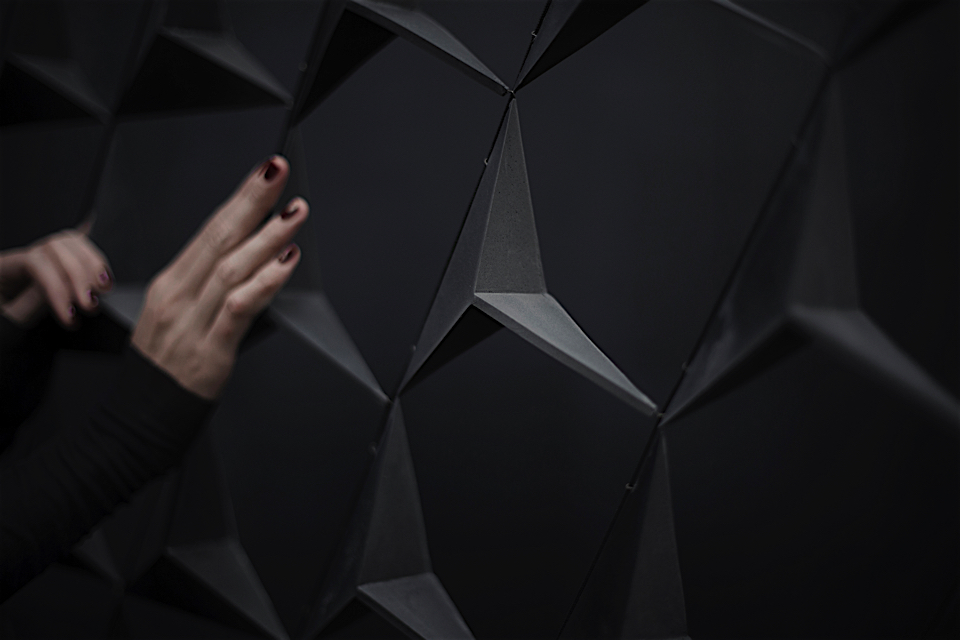 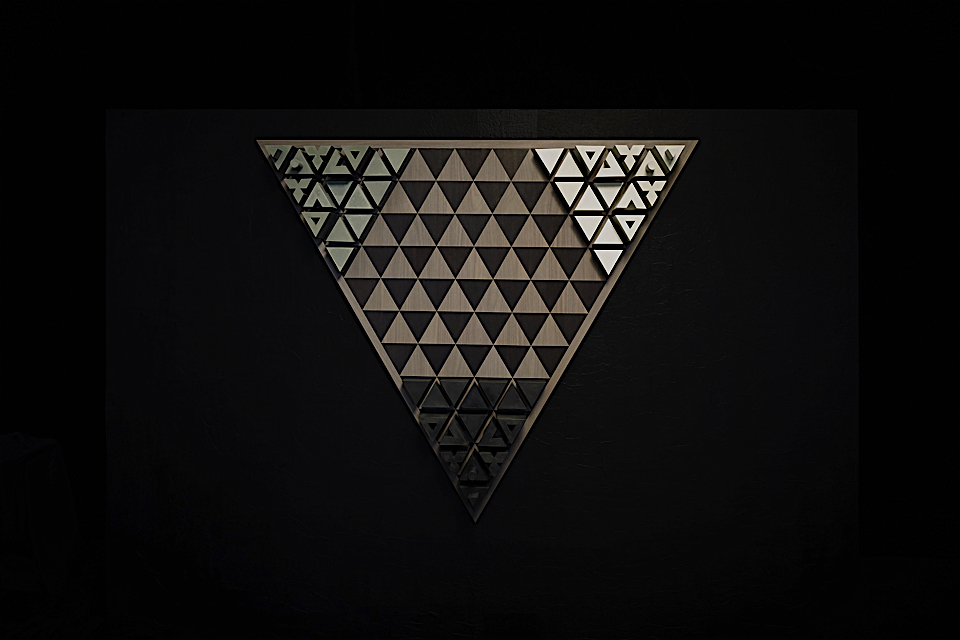 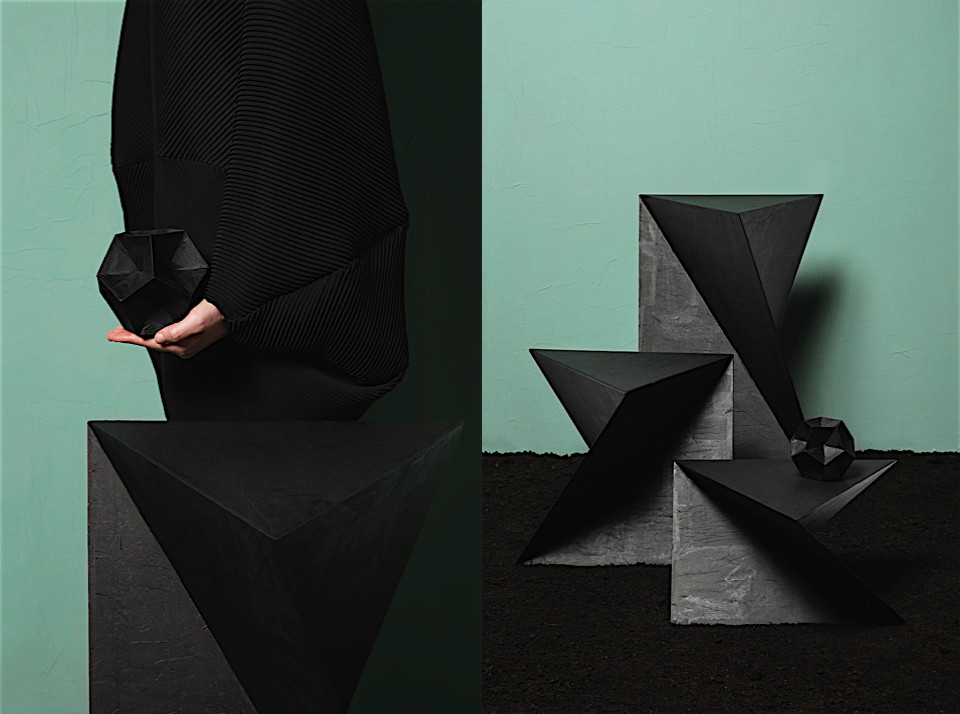 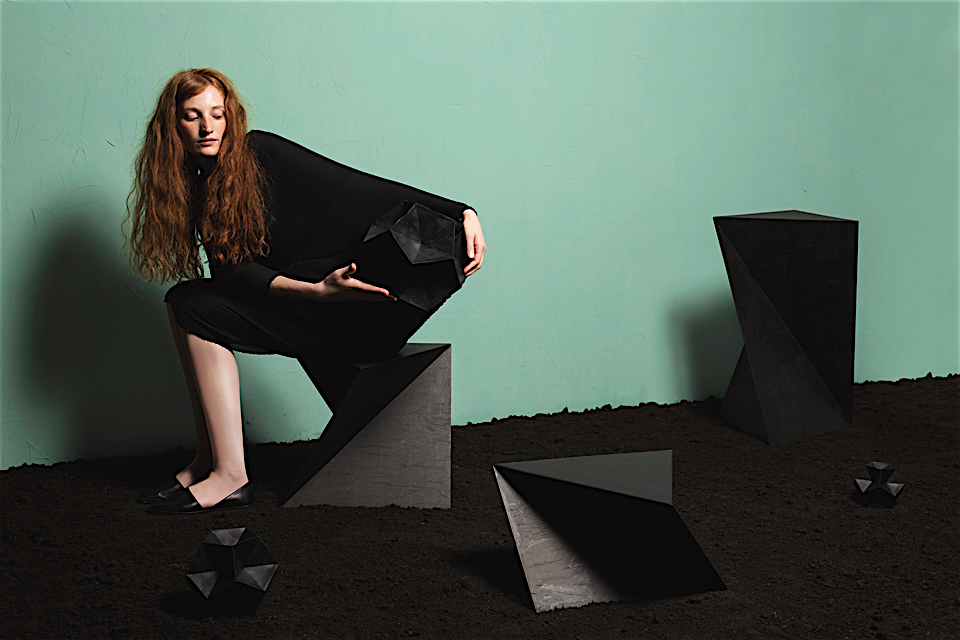