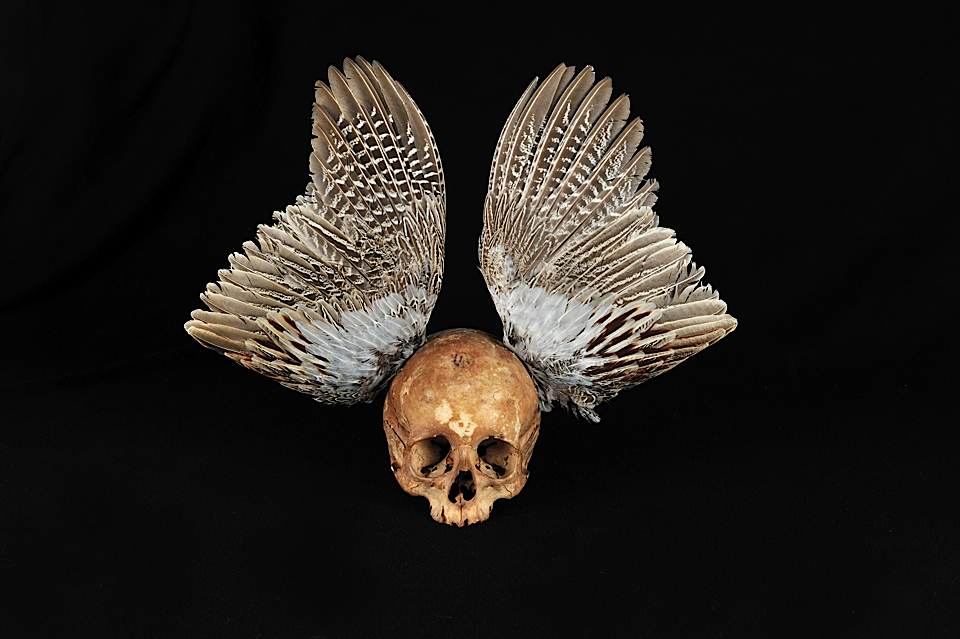 In Julien Salaud’s work there is a whole pantheon filled with animals depicted in different ways, such as drawing, etching and sculpture. It is generally accepted that his work examines the connections between man and animal. That is indeed one side of his work, but transformation is really the core of it: wood animals skins or insects turning into something else with additional beads, nails, feathers or rhinestone.

Julien Salaud lives and works in Orléans – France. He is represented by Suzanne Tarasiève art gallery in Paris.

Where does your interest in working with stuffed animals come from?

In early 2008 I did two tiny sculptures made of bones, feathers, wood pieces and some seeds that I brought back from French Guyana. One of them looked like a stuffed parrot from a specific angle. I was then studying Arts at Paris 8 University and when my professor saw it, she recommended the reading of Steve Baker’s The Postmodern Animal, which is about taxidermy. Baker states that the works of Thomas Grunfeld, by referring to ancient chimera, carries imagination rather than reason. Meanwhile I discovered the work of Chantal Jègues-Wolkiewiez, an ethno astronomer who previously studied Lascaux cave paintings. She demonstrated that the zoomorphic paintings from The Hall of the Bulls correspond with the sky map at the time. Taxidermy occurred in my work at the same time with the piece les Animaux stellaires. These are both some application of Baker’s book and Jègues-Wolkiewiez investigations. And taxidermy was also a good way to think about death and the way I’m intrigued by the concept of it.

Do you think studying biochemistry at the University influenced your choices as an artist?

Definitely. The first years I studied hard science and I unsuccessfully attempted to develop logical thinking for myself… Later on my first job consisted of gathering data regarding the impact of human activity on the wildlife in French Guyana. I was not really passionate about it to be honest, but I really enjoyed spending entire days tracking the animals. In the end it took me ten years to admit that I was neither compatible with science, nor with its way of studying the world through order and logic. I then focused on Arts – the one and only continual thing in my chaotic process – without actually giving up the things that interest me for my work. I’m thinking about the ones dealing with environment or nature for example.

You make pieces that require time, meticulousness and people to help in the process. How do you usually work?

There are different kinds of beauty. I suppose the one I am interested in is like a fruit: I am not following a logical analysis, and I am not trying to have some concept. I am rather into contemplation, which implies taking some time. So if I want the audience to be aroused by contemplation, I have to take some time to be able to create an object that will provoke the same effect. Until two years ago I was still able to work on my own. It may take several months to finish a piece, like the Constellation du cerf (harpe) II. Since the end of the year 2011 the rhythm has increased, and I was no longer in the position to work on my own, I had to call for assistance to make sure the work would be ready on time…

And I have been working with various people, friends or art students since then. Last summer we were like twelve people working in my garden to prepare exhibitions scheduled in October! Working among a team is somehow very inspiring. Works can exist in a way that you would never achieve on your own. In addition to that, working with different people is never a one-way thing. Twenty four hands worked with a lot of patience and precision on the piece entitled Printemps (nymphe de cerf) during two months and a half. I then witnessed the consequences of the creating process on other individuals than myself. It almost convinces me to do workshops-exhibitions where the visitors could also be involved in the making.

In a way I do think that the best way to understand a work of art is to participate in the creative process.

You are also working with various media, such as drawing, painting, and sculpture of course. Does it allow you to express the same things in different ways? Is it important for you to work with all these media?

Working with various media feels like getting some air or taking holidays. It balances the whole thing you know. I think I would get bored if I was only into drawing or sculpture.

In my case these two media work well together: some drawings from my notebook will transform into sculptures and sculptures will become sketches sometimes. When I cannot make a drawing evolving into a sculpture or the opposite – because it would not match – I take pictures. So changing media is definitely a way of expressing several aspects of a same thing. But there is another possibility too: different media could also alter the artistic process. In that case what comes before and what comes after is totally different, visually speaking and regarding its contents. They are aligned with each other though.

I have experienced it once at the moment. But I keep on working with different media hoping that some metamorphosis would happen someday.

Adeline Wessang was born in 1977. She graduated from l’Ecole du Louvre in Art History, then specialized in contemporary art at La Sorbonne. She wrote reviews for magazines and curates exhibitions on an occasionally basis. In 2004 she was invited to curate a show at Tate Liverpool for ‘A Secret History of Clay’. 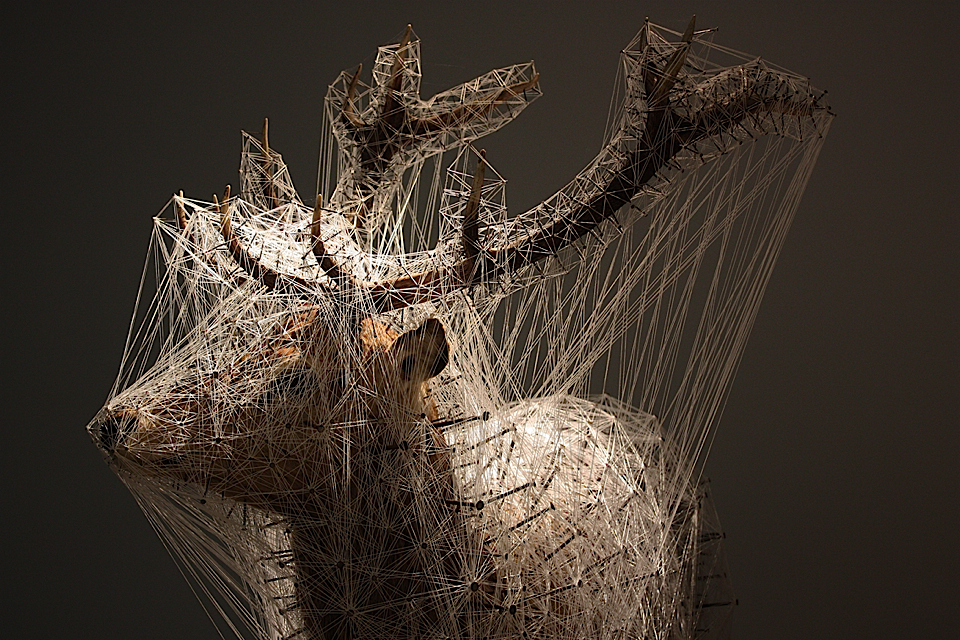 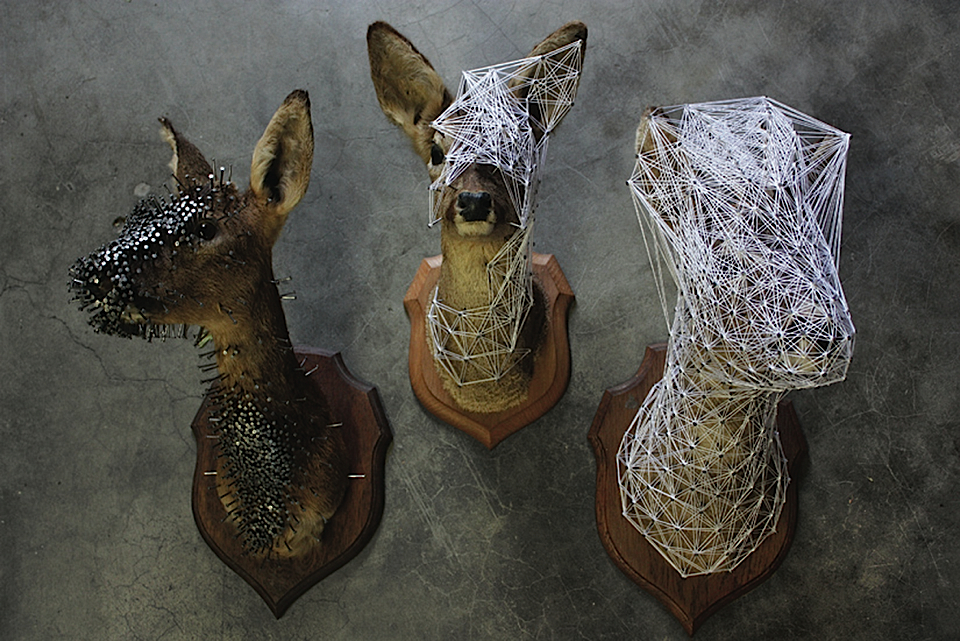 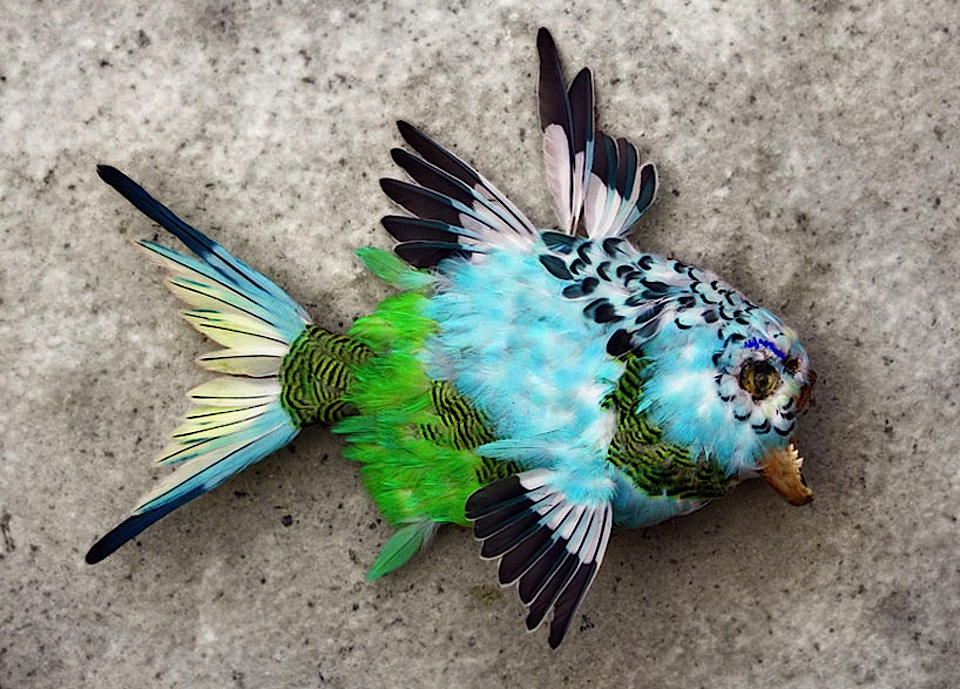