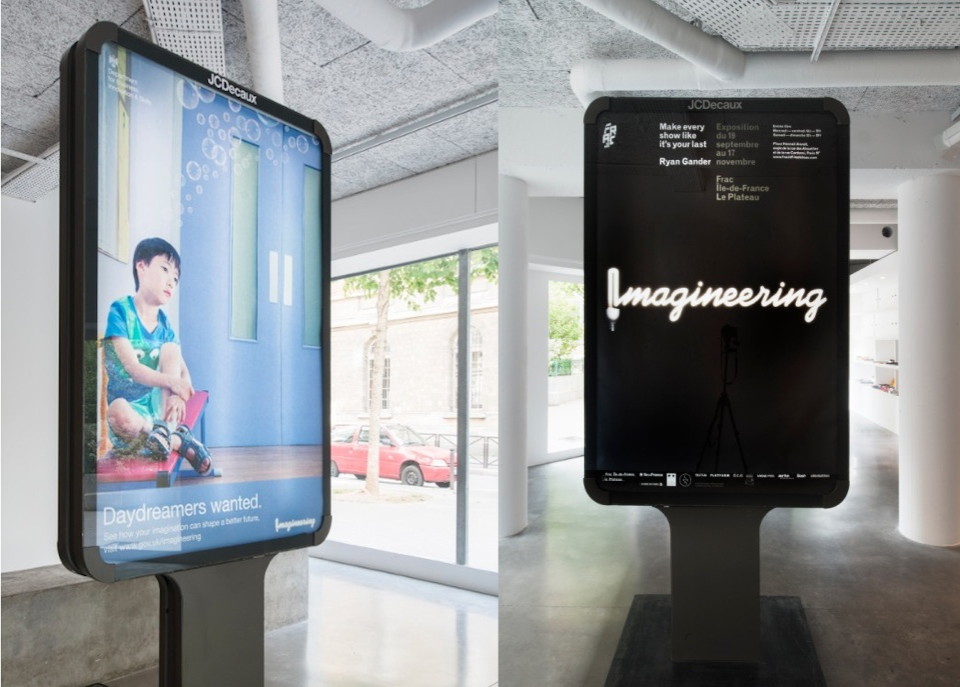 Make everything like it’s your last, digital prints Decaux panel, 2013

Make every show like it’s your last. The title Ryan Gander picked for his current show at Le Plateau in Paris sounds like some advertising motto. In a way, it could also recall Steve Jobs’ famous quote: ‘Live each day as if it was your last‘. The title induces that when people are committed to a creative process, such as artists, they are expected to be genuinely brilliant each time they produce a work or a show. The whole concept is about imagination, a notion that is widely asserted in the show.

In the main lobby, the audience is welcomed by some advertising light box by JC Decaux, the same you can find around the streets of Paris. Behind a black curtain, the visitor is welcomed by a monolithic sculpture made of mirrored glass which stands in the middle of a darkened room. He then could expect something to happen, such as a video projection as the set up recalls the ones generally used in contemporary art exhibitions, but there is nothing going on. He may wonder if the work is broken, he does not even know if he is facing a work of art or not. Those kinds of questions is what Ryan Gander is interesting in as an artist exhibiting work in a show: making objects that remain ambiguous to the spectator.

In the next room a short video is screened, its title, Imagineering, which combines the words ‘imagination’ and ‘engineering’, was inspired by Walt Disney who believed that imagination could allow everyone to fulfil their own dreams. The video running time is less than a minute and it is very similar to a typical British TV commercial. It was commissioned by Ryan Gander to a professional advertising agency to promote creativity in Britain, as if the actual client was the British government’s Department for Business, Innovation & Skills. Gander says he was very interested in the idea of promoting a concept, something that was not a product or an object. So the video is at the same time a TV commercial and a work of art or only one of these two options. There are multiple readings in the work of Ryan Gander and it is up to the audience to decide.

Then the visitor steps into a narrow hall in the dark and discover a framed glass window on the left wall. It seems to lead into some forest, a place the artist refers to as ‘Culturefield’, a territory where creativity is experienced without any intellectual or conceptual boundaries. Tank with ‘Entrance to a clearing‘ is fiction, it is not real, it suggest something else, it says ‘use your imagination‘.

The next room is empty, except for a pair of eyes emerging from a white wall and staring at the visitor who passes by. They adopt various expressions such as curiosity, boredom, anger, confusion, concentration or happiness; the ones that exhibition goers usually experience when confronted to an artwork. With Magnus Opus, the spectator becomes the one who is watched.

Ryan Gander is an artist based in London and Suffolk, UK. He is represented by GB Agency in Paris, and Lisson Gallery in London.

Adeline Wessang was born in 1977. She graduated from l’Ecole du Louvre in Art History, then specialized in contemporary art at La Sorbonne. She wrote reviews for magazines and curates exhibitions on an occasionally basis. In 2004 she was invited to curate a show at Tate Liverpool for ‘A Secret History of Clay’. 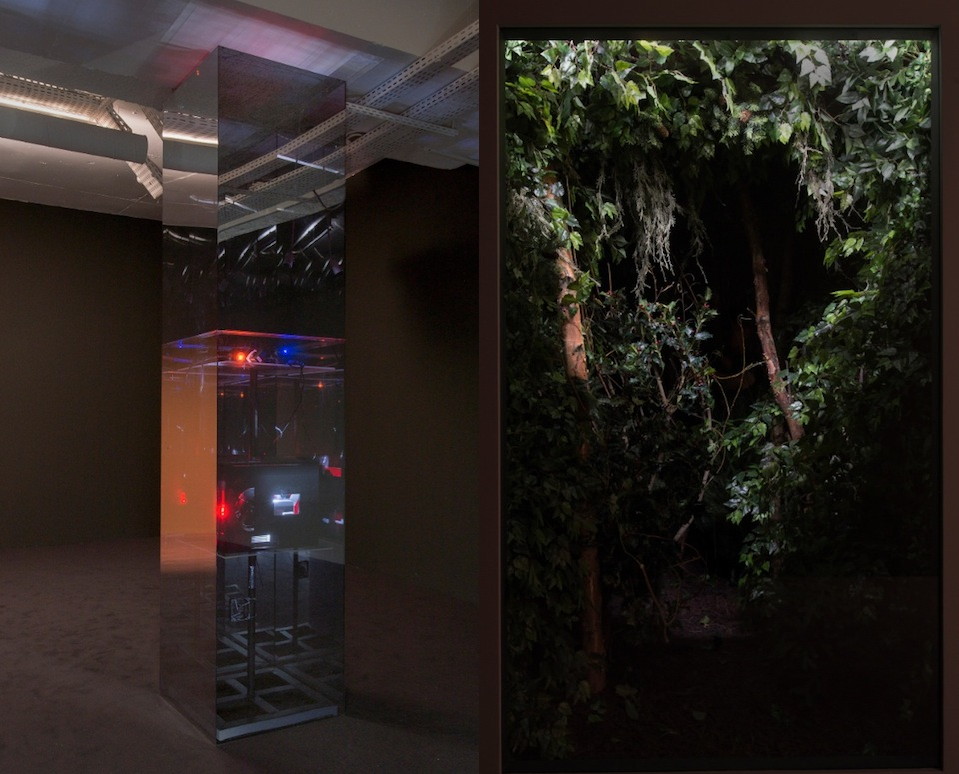 A lamp made by the artist for his wife (Thirty-first attempt), homewares and DIY materials from BHV, 2013