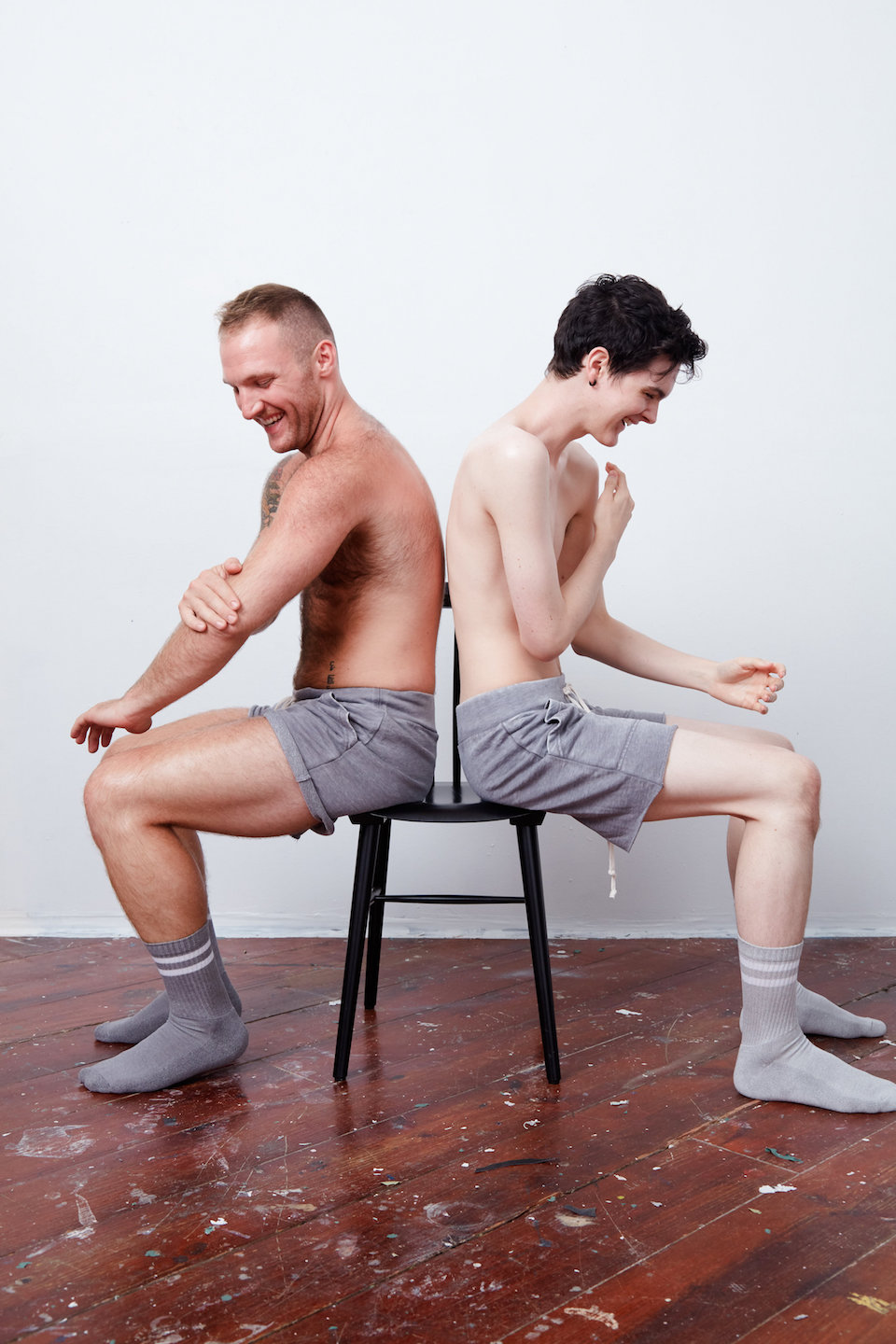 Homo has been a project in the works ever since the dawn of humankind. Officially launched in May 2018 the inclusion and possibility conversation goes back much further. Based in Atlanta, Georgia, the brand is led by Nicholas Komor and has a twofold mission: to reclaim and reframe the word “homo” and change the way we perceive each other.

Operating in a world thick with pop-up social causes aiming to change the status quo, “Homo” goes further than clicktivism. As Komor explains, “We aren’t a cause and we aim to evolve as humans do. We feel strongly the most important thing for humans right now is the need for unity, and so we want to provoke a human conversation. And what that means right now is just trying to get a handle on the word so we can start the healing process.”

Komor continues, “We chose the word Homo for this brand, because on its own it serves as the single-most unifying, lowest common denominator term for all of us who inhabit this planet together. We created Homo as a medium to remind people that we are all human, Homo sapien, and that everyone is Homo. It’s an absolute outlook.” The legacy of the word homo has hybrid roots in both Latin ( homō for man ) and Greek ( homos for same ), with the binomial classification Homo sapiens coined by Carl Linnaeus in his 10th edition of Systema Naturae, 1758. The first appearance of the term homosexual is found in an argument by Karl-Maria Kertbeny in 1869 against an anti-sodomy law. And in 1886, psychiatrist Richard von Krafft-Ebing published the widely popular Psychopathia Sexualis coining “homosexuality” as a sexual perversion, making him ultimately responsible for guiding people towards today’s pejorative slang-term “homo.”

Why hasn’t there been a Homo yet? Because of its negative connotation, the word homo remains blacklisted in many databases due to its ability to be used maliciously as slander. Because of the Lanham Act provision prohibiting the registration of trademarks that may “disparage . . . or bring . . . into contemp[t] or disrepute” any “persons, living or dead,” the United States Patent and Trademark Office (USPTO) reluctantly granted trademarks for “Homo” and “Everyone is Homo” in November 2016.

This same provision would come under national scrutiny in the June 2017 Supreme Court case Matel v. Tam, in which the Supreme Court ruled in favor of Simon Tam, lead singer of the rock group “The Slants” who had originally been denied a trademark for his band because of the disparaging term. The growing list of denied attempts to claim Homo elsewhere currently includes trademark systems for the United Kingdom and Italy, social media platforms Facebook, Snapchat and Twitter, and Nike’s customizable platform, Nike-iD. Komor states, “We really have a problem on our hands here, as a human race.”

Taking lead from the USPTO provision against disparaging terms, Homo has launched an online clothing shop featuring hand-dyed distressed t-shirts, casual knits, and a line of garments under their artist series, of which the first release is a one-of-a-kind graffitied Homo t-shirt. “Everything we do has been designed to be an opportunity to provoke a conversation, and yet it’s all underpinned by our unifying message and DNA,” says Komor. The Homo DNA is simple and states: 1. We are all born of the same matter; 2. We are all born to be unique and individual.

Demonstration of Homo’s visual protests can currently be seen materialized across all touchpoints of the brand, including the ‘belly-button’ logo, the skin-tone brand colors, and the temporary tattoo card that is added to each shipment of unique, hand-made goods.
In addition to regularly releasing limited edition pieces under Homo’s artist series, next steps for the brand include collaborations with individuals and companies to make a conscious effort to reclaim Homo together. Komor adds, “In order to reclaim [Homo], we need to break it and rebuild it.” 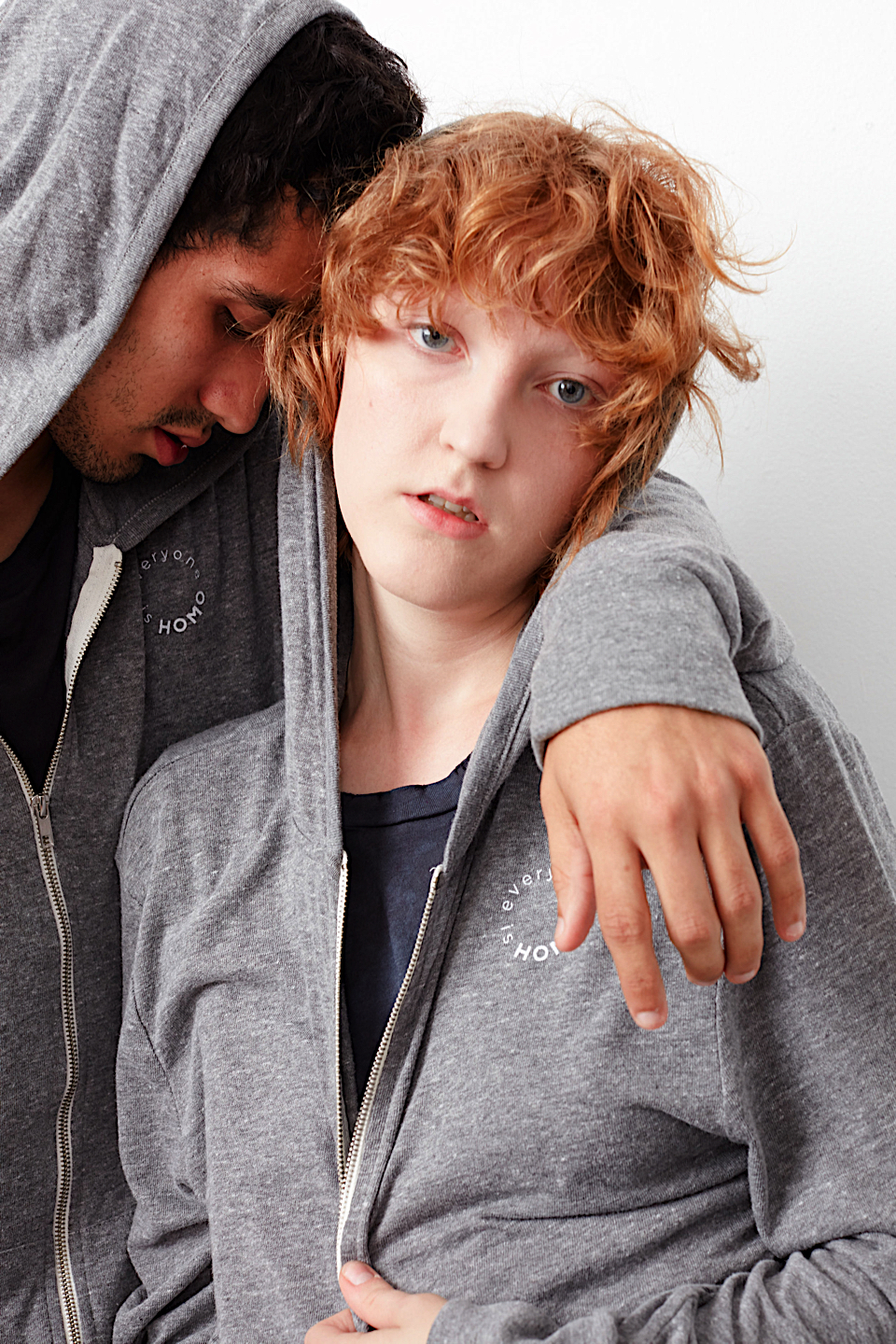 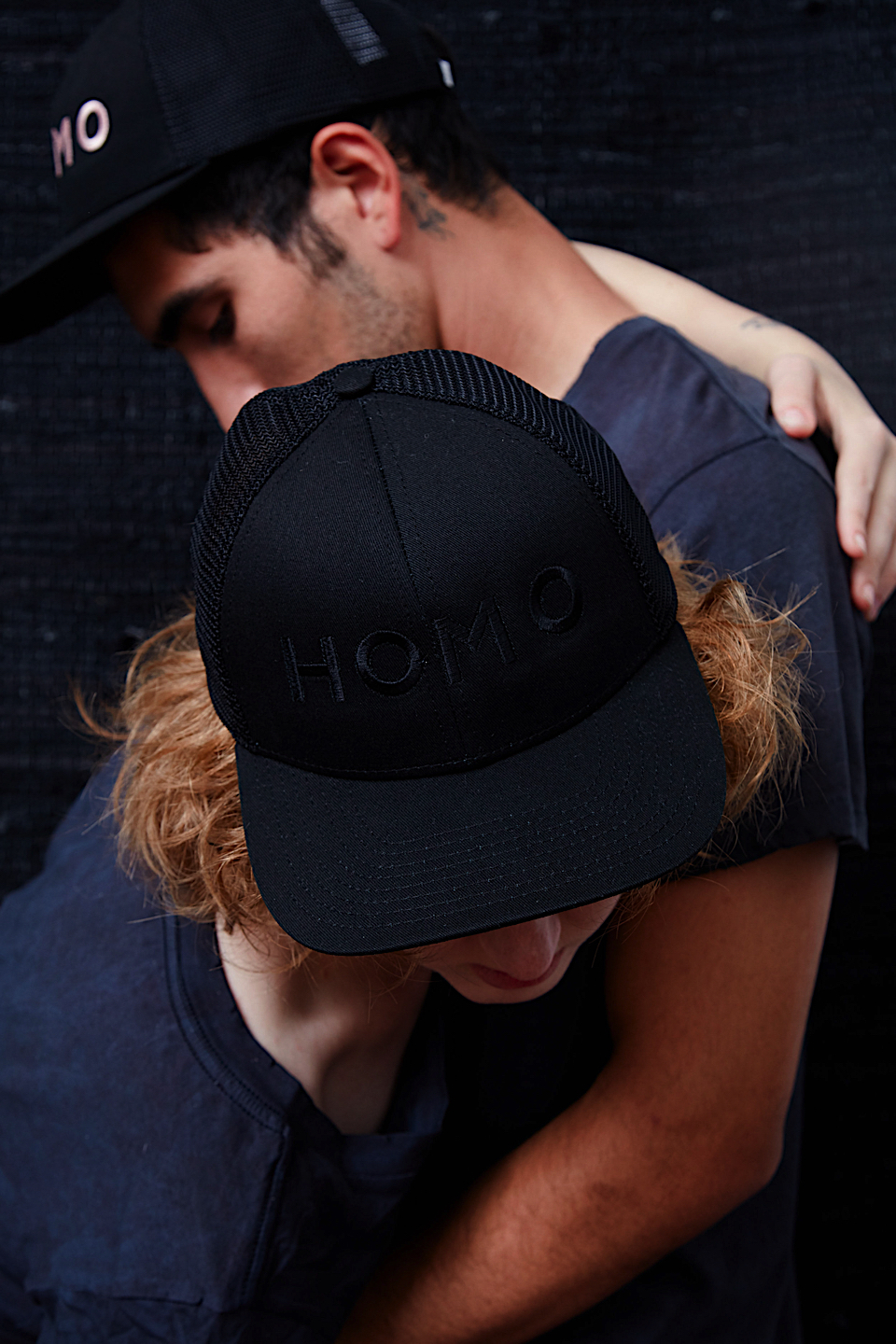 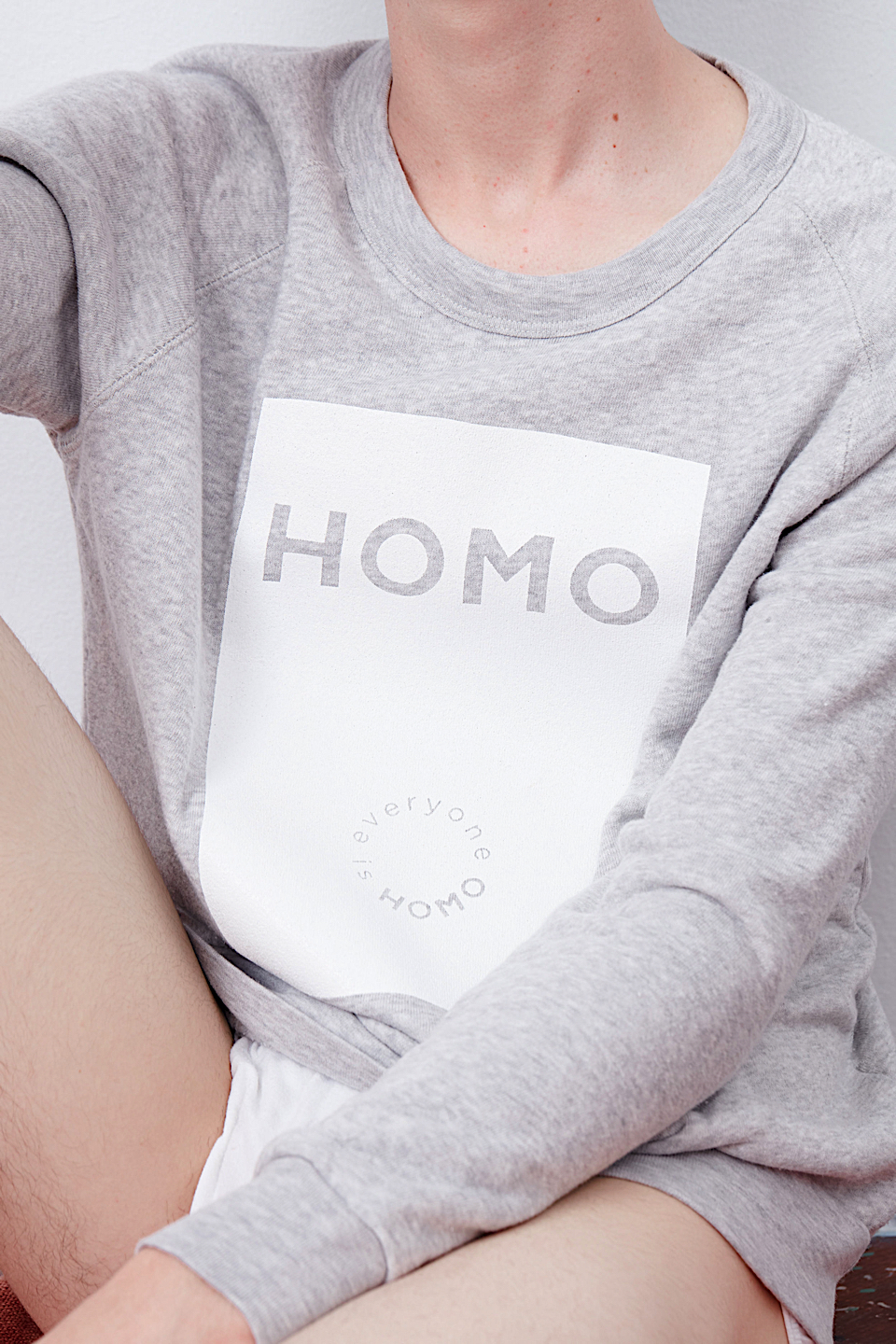 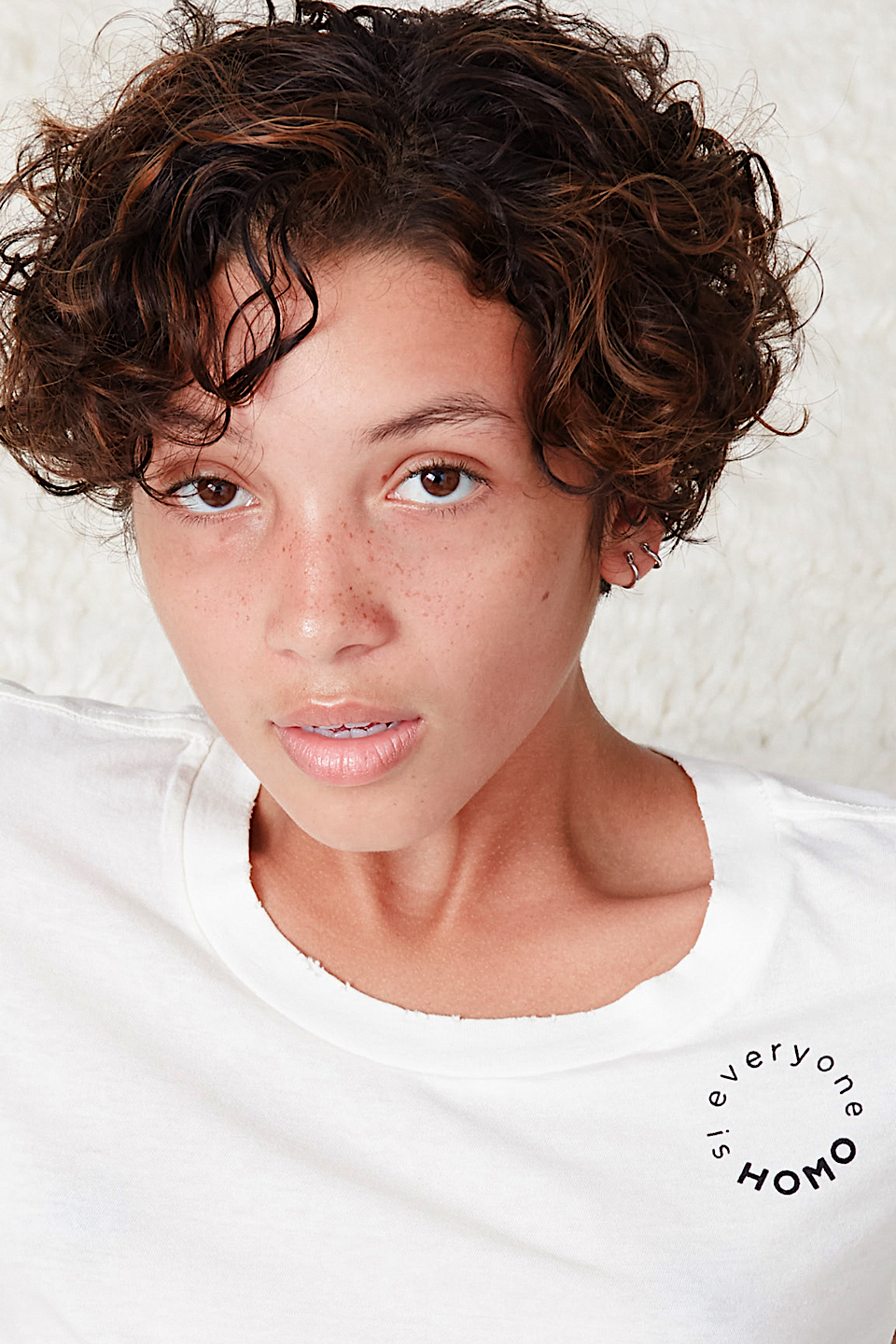 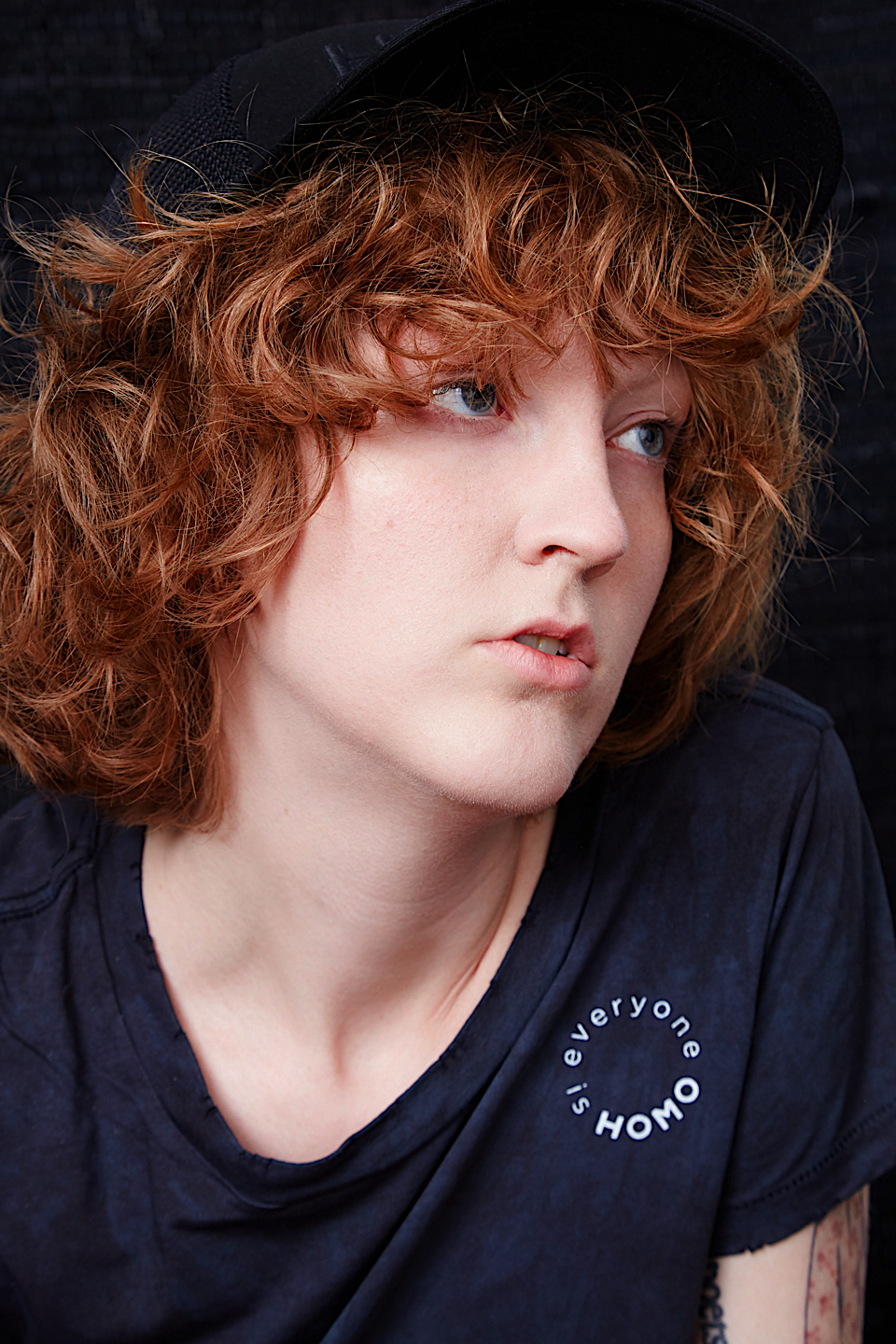 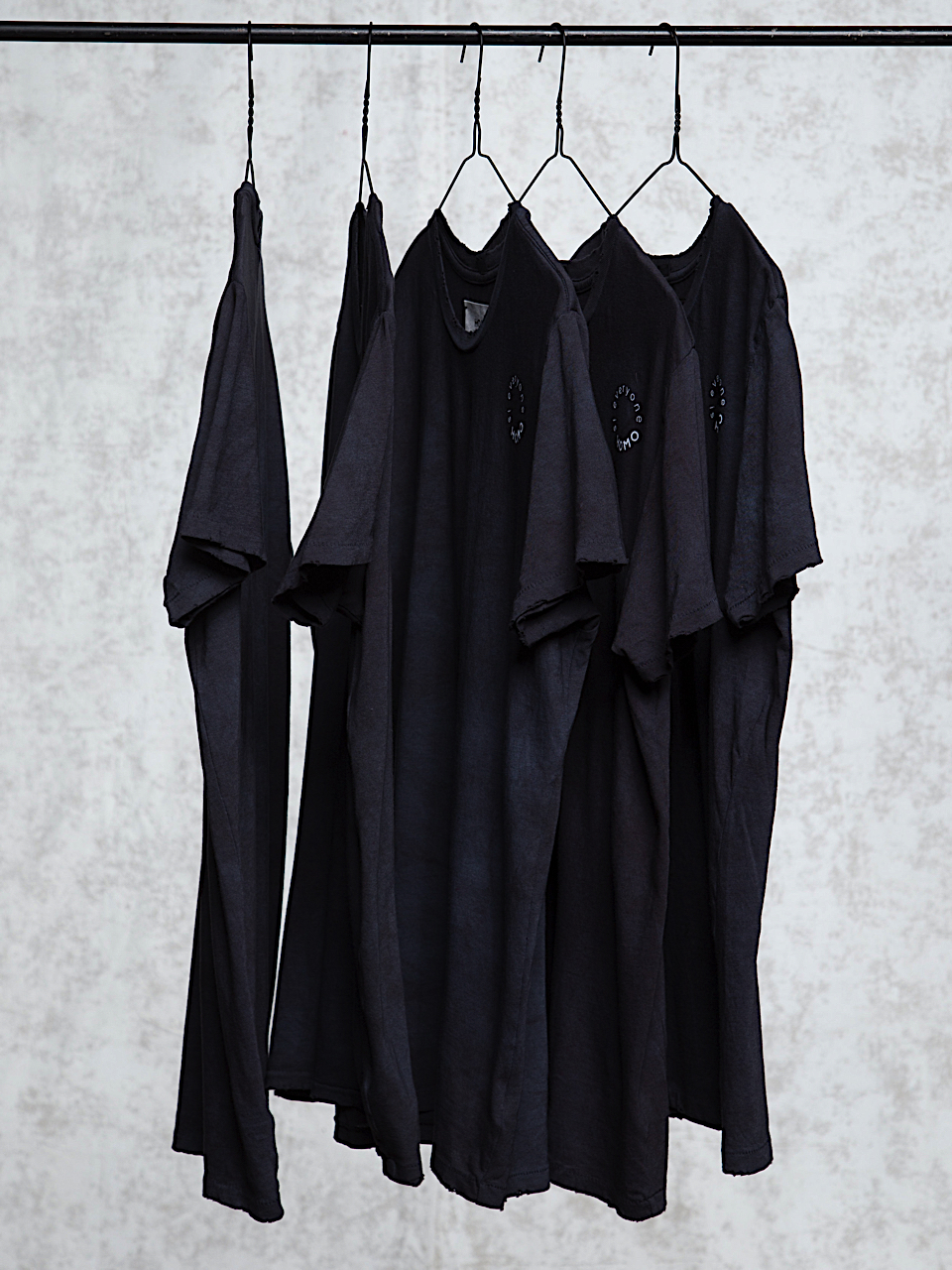