In 2003 two sisters, Kate and Laura Mulleavy had finished college and were sitting in their parents home in Pasadena, California both taking the year off to figure out what the next step in their lives should be.Kate had majored in Creative Writing and Laura studied both Biology and English.  Having slightly hippie parents there wasn’t the traditional pressure to jump right into a career. Their mother was an artist and their father was botanist, giving their upbringing an equal balance between creative expression and the microscopic study of nature. Kate explains the impact of her childhood “ Because of that we have always had this connection to the idea of the land in terms of human and natural expression.” Their parents influence combined with fantastic natural beauty of the area, have always fueled their creative impulse, from the start nature was their muse. They grew up submerged in the vast beauty of Northern California in a home that was surrounded by an apple orchard, eucalyptus forest and a tiny rocky beach. Although out of all this rich landscape the most dramatic influence on them was by far the dynamic Redwood Forest.

Throughout their teen years the girls shared an obsession with fashion, but because of their location it remained an isolated interest, an industry that was happening elsewhere that they loved from a distance.The idea of approaching fashion in a straight forward way (design school and then apprentices in the industry) never appealed to them largely because this path was distinctly urban and not in sync with the laid back lifestyle and direct connection to nature they had grown to need. Their post college year off was spent watching horror movies to the point of total boredom, which pushed them to finally pursue what they had only dreamed of.Together they embarked on the completely improbable journey of launching a fashion label out of Pasadena California. Without any technical knowledge they designed a ten piece collection under the name Rodarte (there mothers maiden name). Armed with passion, and there love of nature the two sisters turned their lack of knowledge into an advantage, instead of being fearful of the unknown each step became an opportunity for invention.

What happened next is what fashion dreams are made of. They took their collection directly to New York setting up appointment that a New York fashion student would be far too intimidated to pursue. One out of the four that agreed to meet with the then unknown talents was Women’s Wear Daily.   Their fresh perceptive and new starting place was immediately recognized and with in days they ended up on the cover of the industries weekly newsletter.

Soon followed the call from Ann Wintour at Vogue and within a season the improbable outsiders were swept into the fashion system and celebrated for attacking design with a distinct new mindset. Fast forward to 2011 and the sisters have had quite an amazing career. Even with the embrace of the industry they have remained radical still questioning every step of the process while making avant-guard collections with inspiration ranging from, Star Wars, the deconstructed buildings of GordonMatta Clark, what it means to be Frankenstein, poems about blood by Silvia Plath and the bondage photo’s of Nobuyoshi Araki. The originality of their work have made them favorites of both the media as well as women everywhere, even catching the attention of director Darren Aronfskys. His love of there work won Rodarte the ultimate commission designing the breathtaking costumes for Oscar contender Black Swan.

Here Bloom showcases Rodarte’s Spring 2011 collection.Which brings the women back around to their eternal muse, the redwood trees.  Re-imaging the texture color and pattern of bark transforming it into would grain blouses and veneered cocktail dresses. They have taken the rawness of the wood creating fantasy textiles that are surprisingly elegant but capture the romance of the forest. Laura explains this collection has “every shade of brown you can imagine, seventies suburbia, wood paneling, gold, off colors like chartreuse—basically, a combination of all the things that represent the area to us.”

In the New York Times 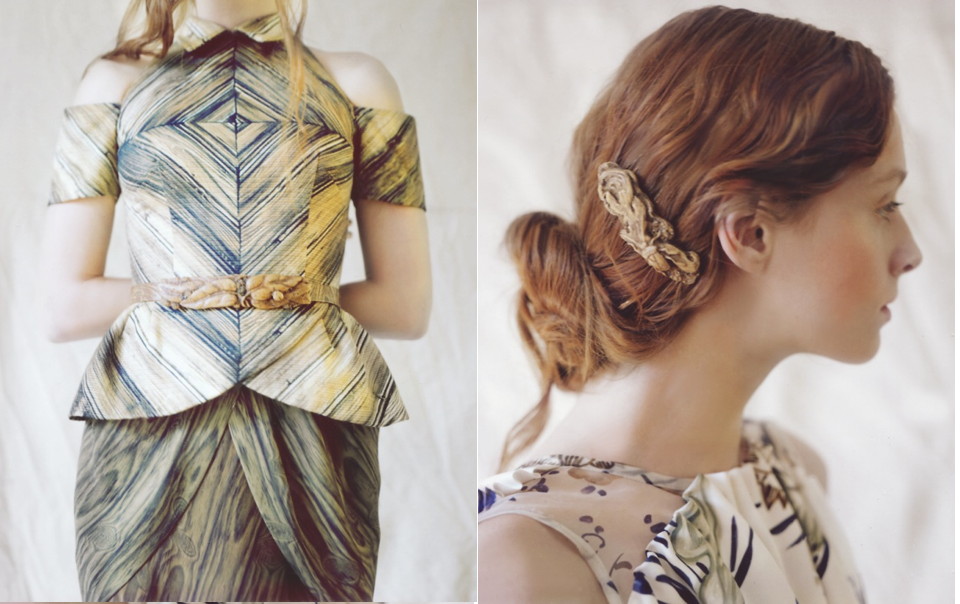 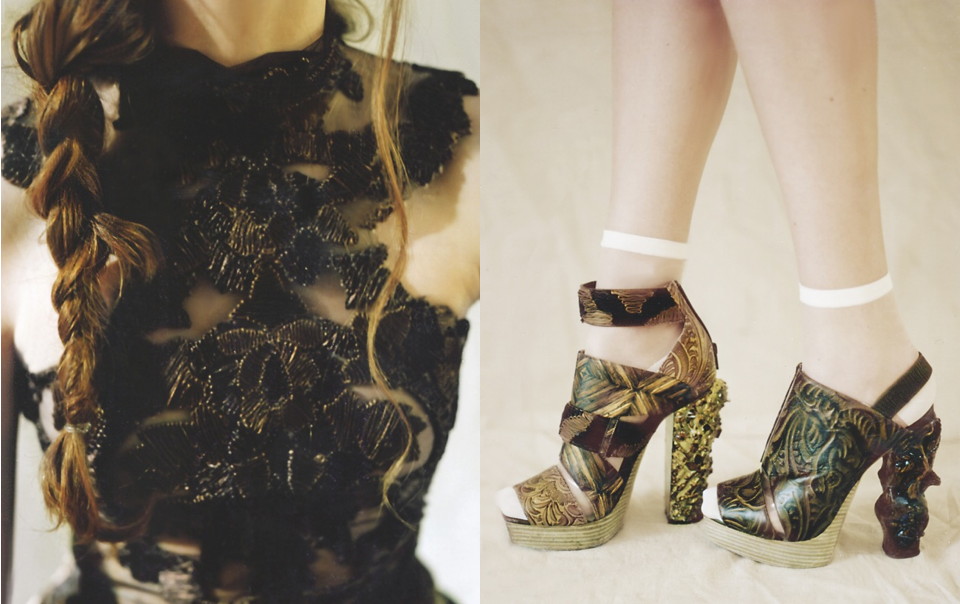