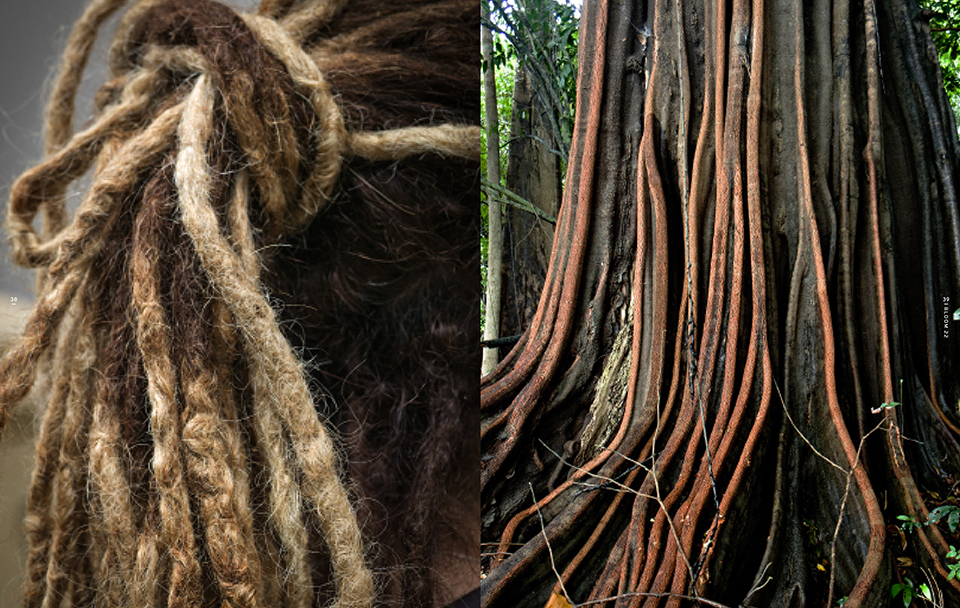 Roots are designed to anchor a towering tree’s body to the ground and as locks, they are grown to anchor onto the spiritual dimension of hair. Both are entangled in representing a powerful sense of belonging.

Trees are like the warriors of nature who fight to keep a foothold in extreme conditions. Martial roots conquer the ground, avidly drawing nutrients and providing a base for the rich canopy of green leaves that process energy from light – bringing together two dynamic systems, connecting earth and sky. Just as jata, as dreadlocks are also known, connect the brain to a higher mental order, entertaining special relations with the spirits like an immortal traveller between two worlds. Therefore the roots of skull and tree bewitch people and offer a sense of mystery, able to take on mystical powers at the centre of the world’s fascination.

Roots are intelligent and have a natural perception of their environment, including a haptic sense of light sources and physical obstacles. Whenever the environment of air, food and water are perfectly adept to meeting this organic architecture’s ultimate needs, roots will spontaneously start growing in all directions, further anchoring the trunk, further nourishing the tree. Roots are pretty powerful growing machines that can destroy foundations, snap water pipes and even lift sidewalks. Violently making their presence felt.

The tree can be seen as a witness of ritual happenings; to talk to and touch the trunk becomes  a powerful experience from which we can draw spiritual powers. We are unable to grasp the complexity of our feelings and therefore bow to the superiority of the roots and trees towering over us.

One of the most significant associations of trees is their links to society. Trees are used as village centres under which to solve tribal problems and as places of gathering for worship and rituals. Several ethnic groups revere trees and use them to make representations of their gods. As totems, they become visible representations of unseen forces carved in wood, often representing the trees themselves.

A sense of belonging is something many people strive to achieve. The tree, with its firm base, symbolises that concept of roots, an on-going relationship with our surroundings. The canopy drawing energy from its environment is symbolic of our need to absorb our cultural heritage and embrace our evolution from times past. The drive to find a Darwinist link with our present is instinctive and represents our quest to find a reason  for being on this earth.

Pagan religions worshiped the roots, associating them with longevity and fertility; this explains why some trees hold sacred positions, more as mythological deities rather than just as places to gather and celebrate. The compelling biblical tale of Samson and Delilah, in which a man’s potency is directly linked to the dreadlocks on his head, describes how Samson’s powerful strength vanished when Delilah had his seven locks cut. Thus the symbolic reading of roots and locks are similar, sharing beauty, texture and meaning.

Dreadlocks’ roots go back in time thousands of years, when the deity Shiva and his ardent followers promised to never again cut or groom their hair. Ever since, many belief systems have incorporated a disregard for physical beauty and vanity into their spiritual path. Such seekers cease to cut and comb their hair and this is how, left to their own devices, the fibres naturally knot and felt together, forming dense and anarchistic tubular mats.

In many cultures, these locks are sacred and considered to be a religious expression of disregard for the profane. In all the myths about flowing locks, there is an interplay between extreme asceticism and virile potency, which intimately links the elements of destruction and creation.

Most locks are internally formed and with different textures of hair, various methods are used to encourage their formation. Letting long hair flourish freely by not brushing will encourage it to tangle as it grows, leading to twisted and matted ropes of hair. Western and eastern traditions believe that mental and spiritual energies may leave the body behind through the top of the head. Therefore the tresses are knotted so the energies remain encapsulated within the system, keeping the mind strong and the body rooted.

Dreadlocks are often associated with the Rastafarian movement but many other groups have worn locks before, including the Hamitic people, Maasai warriors and Yoruba priests of Africa, the Semitic people of Asia, the Spartan warriors of Greece, the Sadhus of India, the Sufis of Turkey and the Fakirs of Pakistan. Aztec priests were described as wearing their hair untouched, allowing it to grow long and matted.

Named after the Dreads, an eclectic group from 1900’s Harlem that drew influences from the bible, tribal cultures and diverse Eastern religions and who “dreaded” the powers of God. Emulating the initial holy men, the Dreads grew matted locks of hair, which would become known to the world  as dreadlocks. Thus the jata have become more than a religion; they are a manifesto for a way of life, an existence on the outskirts of society. Today they signify spiritual intent and are also a statement of non-violence, embracing solidarity amongst the less fortunate and oppressed minorities.

Integrating and interweaving, roots and dreads lead to a strong correlation of meaning and symbolism, where both entities teach us to root ourselves too: to anchor our body to the earth,  paying homage to its nutrients, to elevate our mind to the sky, actively contributing to the world’s consciousness. Willing a better world. To search for our roots, which are themselves in upheaval in today’s seemingly careless global society. To root for each other also, organising society in circles and mental groupings that are able to nourish our hopes and visions for the future.


BLOOM Luscious is available for purchase: 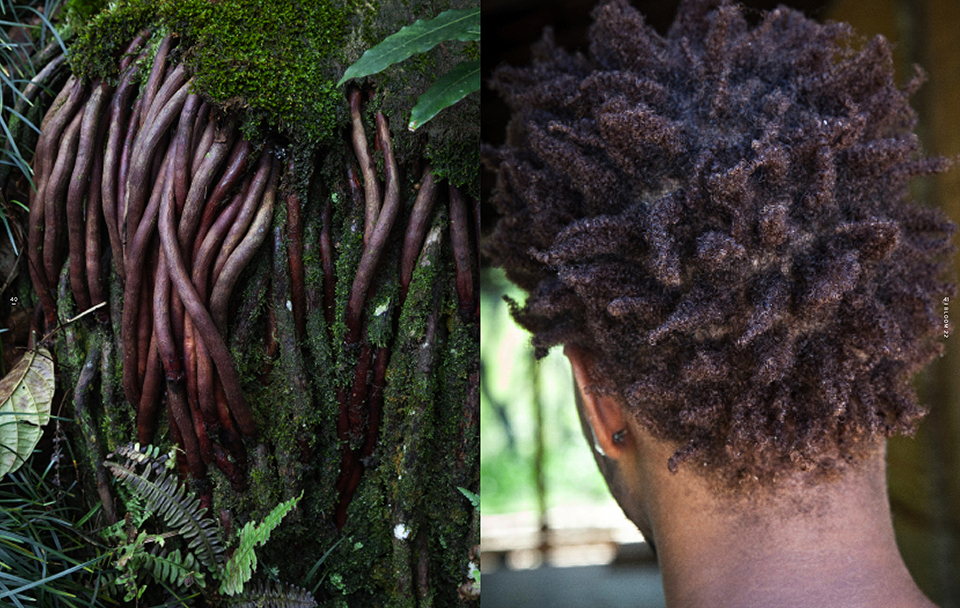 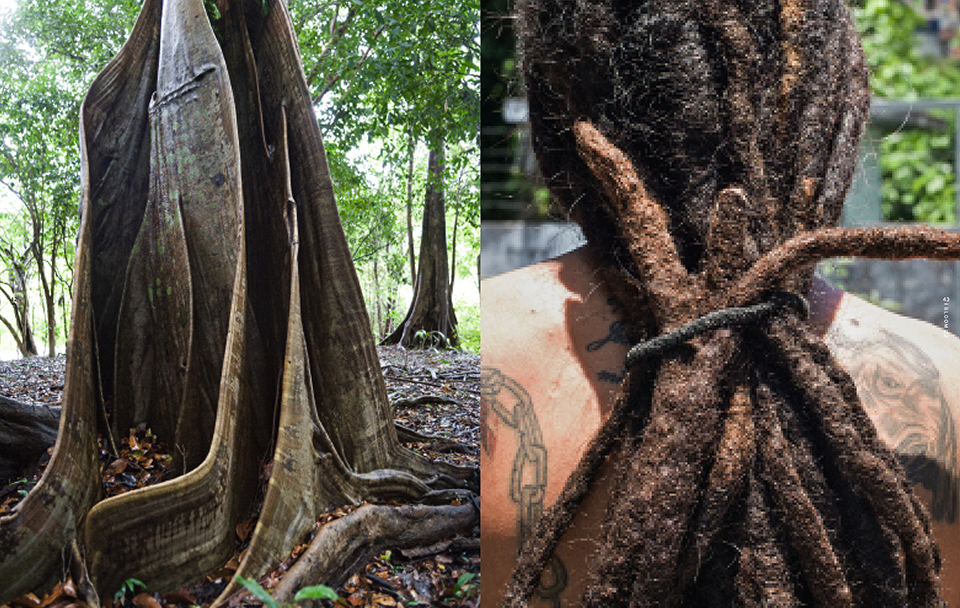 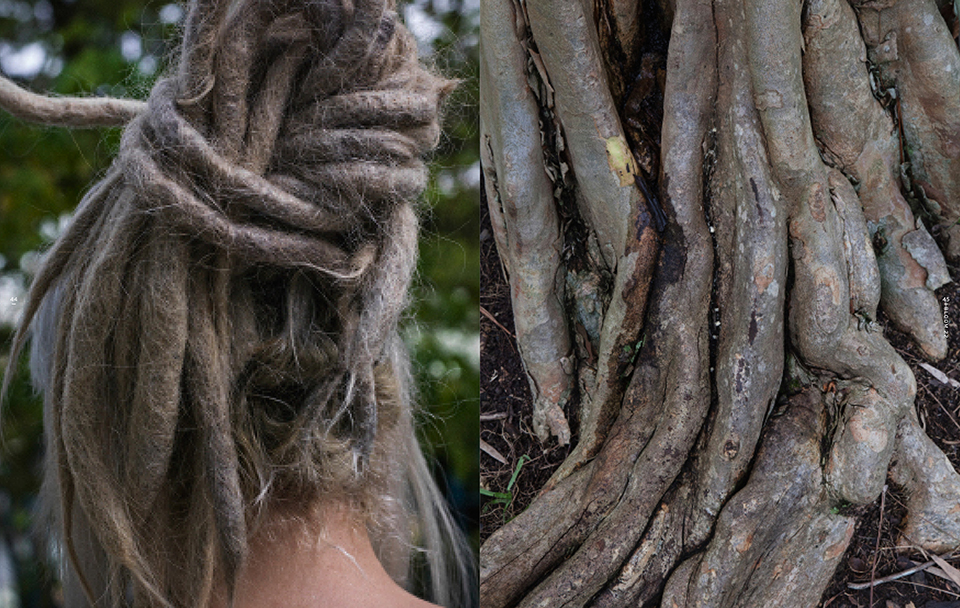