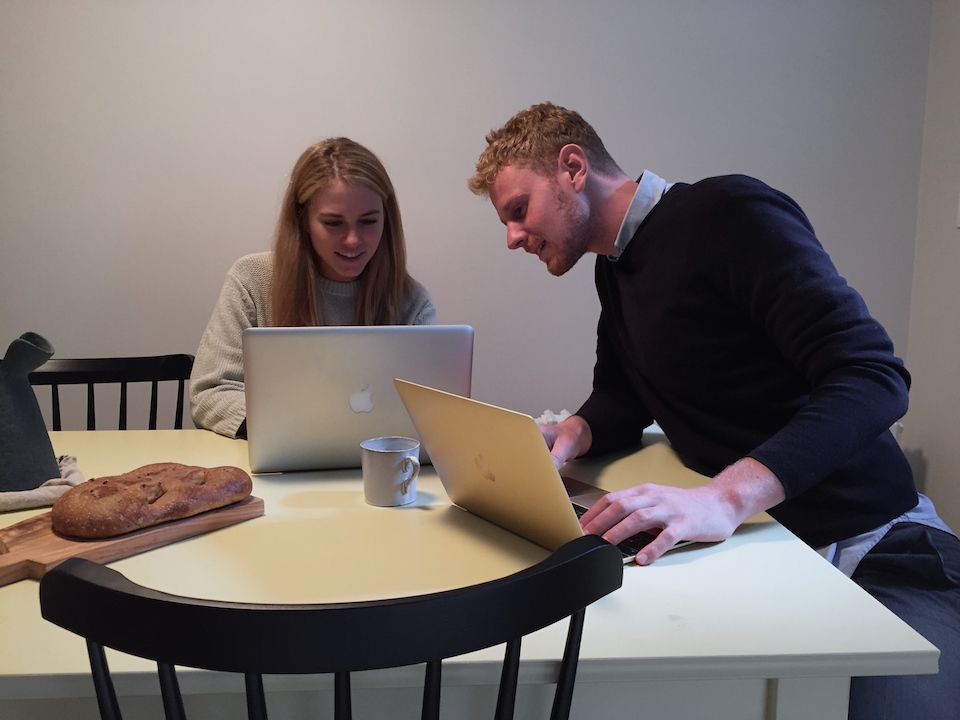 Most creativity does not take place within the confines of a traditional office. Thinking time – a process most creatives are never paid for and which many clients undervalue – pops up best when the psyche is most at ease: in bed at 4 in the morning, under the shower, on the plane, while walking the dog… In order to think more creatively one needs to relinquish control over the brain, allowing it to intuitively meander until the solution presents itself.

Sometimes the thinking gestation period takes weeks or months and is informed by years of references – visual or otherwise – which glide back and forth within the thought process. For creative people, taste and aesthetics have been developing since early childhood in the same way that good writers draw upon a lifetime of reading and vocabulary. For them, creative thinking is like breathing.

While employees in most sectors spend the majority of their day answering emails, corporations now ask their staff to also process more creatively. Since they want to promote thinking outside the box, office spaces need to become incubators of the intuitive moment; relaxing us rather than aggressing us, enlightening us rather than forcing productivity. Therefore the modernist and minimalist grids that for decades have laid out the workplace in the name of organised efficiency need to be rethought in order to welcome this more fluid timeframe. A generation of people who will use reason and emotion daily in the decisions they make.

In big cities with a faster pace, many workers no longer truly break for lunch, eating their food out of disposable containers at their desks while constantly checking their smartphones or computer screens. According to a recent American study, at least 54% of employees in the U.S. begin and end their day checking emails in bed; exposed to the negative effects of blue light emitting from electronics. This out-of-hours behaviour adds 1 day to the workweek, not calculated into remunerations or long-term benefits let alone people’s stress levels. To combat this, caring companies turn off access to their personnel’s emails between 8 PM and 8 AM, while other systems bank-up emails only to schedule their release during work hours, something that is today considered more professional in many parts of Europe. These firewalls already work to identify online misconduct, bullying and aggression but could one day promote a more controlled sense of wellness at organisations that value workers’ private lives as much as their professional ones.

Because of the swarm of electronic messages that engulf us daily, including those with large numbers of co-workers in copy, people no longer have time to read or respond to all of them. Non-responsiveness is often mistaken as “ghosting” at a time when it’s OK to ignore others. In the United States, emails have been reduced to mere sentences, sometimes only one word long. Attachments, PDFs and PowerPoints are instead used to provide more detailed information; proudly paraded by the sender as if they are the product of some extraordinary effort. It is perhaps only in more formal societies like Japan, France or Germany where the art of “letter writing” still persists in digital communication. Paradoxically, the most direct way to reach someone now seems to be by telephone (even if tens of emails are sometimes required to set up that conversation). And in Japan, handwritten faxes, paper documents and printed invitations remain the most revered form of personalised messaging. The only way to get someone’s attention in a world that is desensitised by its digital age.

The Amazon scandal, ignited by the New York Times’ August 15, 2015 exposé, clearly illustrated how some corporations value business far over people. Companies are surely haunted by recent memories of mass suicides such as those at Orange or Foxconn – and more deaths will follow. By contrast, other businesses have learned that providing healthier and ethical conditions is a better way of maintaining productivity and loyalty alike. Beyond fringe benefits or bonuses, it’s the simple things that count, like multiple-position desks to protect posture, improved lighting and access to daylight and fresh air.

Yet it takes much more than a communal table tennis table to foster team spirit. With people’s fingers turning into claws because of too much hyper texting, Friday afternoon hand massages could become the best way to send people home for the weekend. Yoga studios and onsite showers are also good ideas, located not far from the unisex lavatories that now replace the segregated ones of the past. In-house haircuts and manicures save time and add a folly of appreciation for both men and women. Full kitchens and dining rooms should be used as places where workers can restore themselves and eat properly, perhaps even blocked from wifi connectivity during lunch in order to force them to stop – unless employees really want to set up their office in the kitchen. These spaces should offer real leaf teas, real coffee coffee machines and filtered tap water for bottling so as to encourage constant hydration. Why distract people with free candy sugar hits when treating them like adults can innately enhance their performance skills?

After nearly a decade of austerity measures in businesses – the infamous cut-backs that remind staff how insignificant they are like sensor-activated light bulbs, using half as many light bulbs (!), scratchy-sheet toilet paper and train-quality-scented hand soaps – it’s time to rethink how to get people to come back to the office rather than have them work from home. Already now, companies in central and northern Europe understand that having their employees work outside the office is detrimental to their long-term lifestyle, valuing them more as human beings since rewards for the firm can be obtained in other ways. If happy wife equals happy life, then surely happy worker equals happy banker!

Society is in a period of major flux. Our hybridic lifestyle means that we move like liquid between work and leisure and that time is considered in very different measures. Slow time, fast time, down time, family time, personal time and interactive time each allow us to design our lives on our own clock, choosing to do things when they are most convenient. This includes work time which is voluntarily dispersed throughout the day, often rewarded by indulgence time as a balance.

Corporate organisations must evolve to mirror these societal changes. The distance between hierarchies will continue to dissolve, with employees reporting to team leaders in big companies and sometimes to no one at all in smaller firms. In contrast to the pyramid structures of last century, horizontal workforces encourage collaborating together and working independently. Staff’s individual assets are allowed to shine while responsibility and credit are shared. This philosophy of sharing is what will guide the office spaces of tomorrow.

Young people today are not concerned with the need for owning everything; they’re more willing to embrace the sharing economy in order to redistribute their modest wealth. Already now, shared office spaces have popped up in our cities: public domains where one can work at a desk, host a meeting, access facilities and a receptionist.

Yet these spaces still lack physical stations where one can store actual materials, often leaving such items at home where they procure a sense of disorder. Lockers, focus rooms and even bedrooms could be added to these sites in order to make the venues more flexible, for when working late or needing to set up early. Since our metropolises are getting larger and some people live at the suburban frontier, multiple-location workspaces may be needed, organised like chains of communal gyms with subscription members. Sharing rent and sharing equipment means that small business can flourish faster, matched by the sharing of ideas in a freer way too.

As we become more and more immaterial, new sectors and services will become the thing to sell. We will divide into merchants of ideas or merchants of commodities, not unlike during the Renaissance when thought, trade and commerce were the pillars of a thriving society.

At larger organisations, the work area has already changed. To reflect uniqueness within the horizontal work ladder, companies like Google now carpet their floors in a different colour per level; almost to remind everyone that each colourful part in the chain is as important as the other. Open-plan offices embolden people to work together and provide them with comparatively spacious environments. Yet panelling is needed in order to absorb noise in such places, as well as isolated “telephone booths” for confidential conversations whenever needed. Annexes and pop-up structures become the architectural method of bringing back a sense of intimacy to this new egalitarian workscape.

With the borders between life and work blurred, smaller offices could embrace a more family-style set-up. Retailers, hotels and showrooms have already established warmer ways of receiving clients; now the office space needs to turn domestic too. At companies that believe in green, buildings can be turned into contemporary “farms” with wooden beams, landscaped campuses, bicycles for staff, solar powered energy, fresh organic catering, a whisky bar and even deliveries of fresh eggs to take home.

At The Edelkoort Group’s company studios in Paris, Tokyo and New York, we have all but eliminated the need for desks. Our team works from laptops and smartphones, adapting position depending on mood or where the light is warmest. In New York, we moved into a West Village townhouse where we have taken the live-work module to an entirely new level. With domestic quarters on different stories, we hold client meetings on dining tables or in the cosiness of the kitchen, we take breaks to do a spot of gardening and we host functions in our cinema room or on the parlour floor by the fireplace… With the possibility of multiple events taking place in various rooms throughout the day, the home becomes a showroom and the showroom feels like a home. Enticing clients to come see us rather than the other way around has become a whole lot easier.

This style of branding reflects how we collaborate with our clients as partners. We bond with them and appreciate the human connections we forge in life as in business. The idea of impressing them with a haughty loft space or pretentious props is no longer relevant. Instead we sit upon shaker furniture and bake them homemade cakes. And cocktail time of course becomes the most sought-after moment to set up appointments, with everyone ready to come join us for an end of day drink.