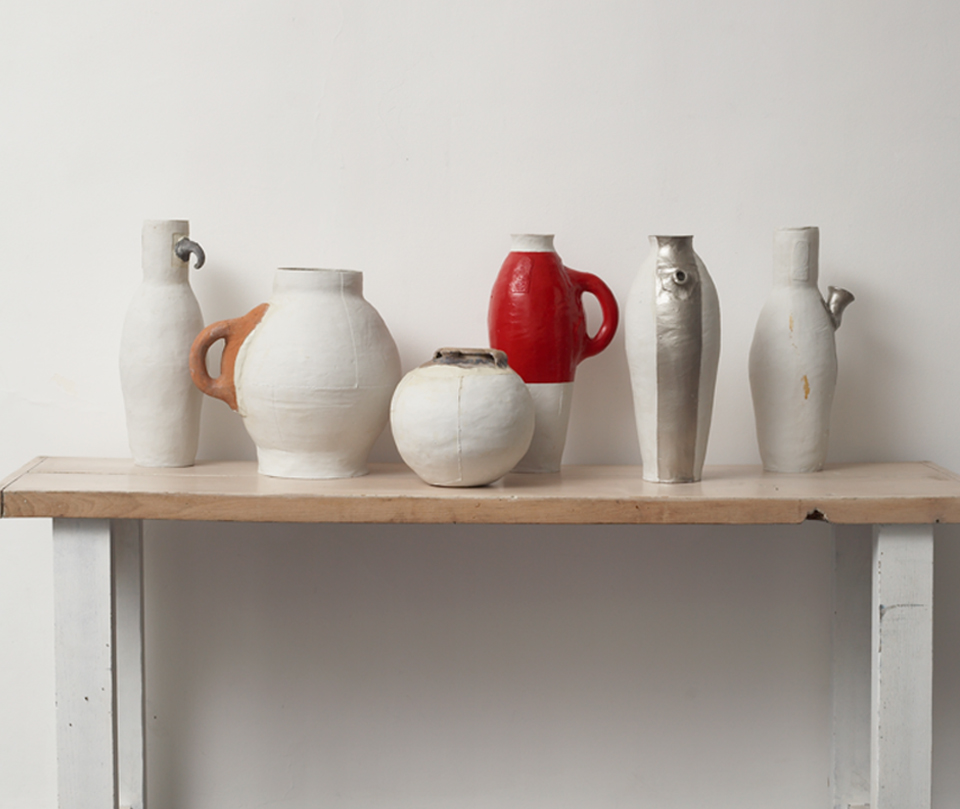 The day in 1998 that Hella Jongerius pushed her thumb into a small rectangle of still damp clay to leave her unique imprint on a series of pots was a historical landmark moment in the recent history of Dutch craft and design. Single-handedly or rather, with a single thumb, she pushed open the door to a new era of creation that has truly changed our perception of giving form to matter and to the important changes in the design discipline at hand.

As an early introduction to the turn of the century with a body of work capable of prefiguring the next currents of creation, with 7 Pots / 3 Centuries / 2 Materials Hella decided to take fragments of archaeological shards of pottery and reformulate around them; the body of the past rendered in contemporary clay and finished with futuristic high tech paint. This collection of containers is surprising even today; their robust presence conveys a sense of serenity and exudes a peaceful feeling. Strength and fragility are combined to create this fusion bridging the past and the future.

Hella’s vessels can be seen as a work of autonomous design that has been precisely forecasting the future in all its aspects. A host of products and projects are until this day playing with ideas of national and regional history, to be rekindled as future international and global icons.

Thus, Jurgen Bey has given new skin to old furniture, new function to old crates, new volumes to old chairs and new and tender décor to antique ceramics. Much in the same way and at the same moment, Piet Hein Eek has set out to make used wooden planks his idiom formulating brand new, yet rustic and sturdy Scrapwood furniture. A generation of individuals embracing the regional and the historical, creating the global and the contemporary, was born.

A decade later, it is Studio Job that is incorporating proven vintage materials like ceramic and bronze and eternal shapes like candles or jugs to design ultimate prototypal form, such as the Sword of Damocles, made from crisp and sharp biscuit (a sword that in fact would break upon dealing a deadly blow…), and the spade and hayfork from the Farm collection, made out of highly polished hammered bronze. Modest things constructed from strong and attractive materials with masterful finishes is this dynamic design duo’s way to express monumental form by putting it on a pedestal. They espouse the ethnicity of our culture to decrypt the anthropology of tomorrow.

More recently, it is Joris Laarman who is brave enough to challenge the ‘less is more’ modernist idea, deciding that his Heatwave Electric Radiator’s function needs to have a lot of radiating space, and therefore rococo form is the most fundamental; not only blending past and future, but also bridging the enormous divide between fantasy and function.

Another defining recent moment of collage can be seen in the fantastic, seductively curvaceous form of the wooden Cinderella table by Jeroen Verhoeven. The morphing of 17th and 18th century form in fusion with 21st century technology does look amazingly foreign and familiar at the same time. As if one is stumbling upon an organic find, a beautiful shell, a delicate coral, an intriguing bit of bone like an antique piece of curiosa – or a brand new and futuristic work of sculptural form crafted by computer.

In a vein similar to the curiosity cabinet, the ceramic animal skull which is also a teapot by Wieki Sommers is arresting and also, unbelievably, highly commercially successful; apparently the public identifies with autonomous design very easily.

Since then, a worldwide movement citing former centuries in miscellaneous order (from Viking to Victorian and from Cleopatra to Metropolis) has conquered creation on a global scale; with Jaime Hayon in Barcelona, Marcel Wanders in Amsterdam, Tord Boontje in Lyon, the 5.5 group in Paris, Paola Navone in Milan, Front in Stockholm and Boym Design in Manhattan, to name but a few.

It suddenly makes total sense that towers of recycled ceramics, black lacquered bathroom pieces, gold-plated domestic animals and multiple variations of chandeliers are the result. Royal Tichelaar Makkum, a company which can trace its clay roots back to the late 1500’s, has harnessed this movement by collaborating with contemporary architects and designers wishing to forge the future through tradition, innovation and savoir faire; ensuring the survival of a brand that has become synonymous with the Dutch design movement as much at home as abroad.

The turn of the two centuries has been marked by a second coming of the arts and crafts movement in direct response to the virtual age instead of the industrial age, and in turn feeding a design-educated generation of consumers interested in shopping with their fingers and savouring the unique and the handmade. By giving fantasy to form, in Makkum’s case through hand-painted décor and illustrative shapes set in Frysian clay, a period where telling stories reflected a narrative moment that hedonistically challenged the dry humour of the droog design purists. Jewellery boxes with gold-plated bows, serial irregular cups and bowls, chaotic collages of plates and Delft blue pieces of ceramic bijoux, all bear witness to the exuberance of a small regional and historical company.

In the year 2000, the year of change and transition, Maarten Baas decided to burn the past by setting fire to antique furniture, halting the process before it fell to ashes and stabilizing it with resin; he acknowledged once more the link between past and future, paving the way to a huge current in furniture and curiosa design baptised as new antiques, dark age, post punk and neo gothic by the media. It felt as if Smoke anticipated the big bang of our young century and its terrifying repercussions; the arrival of fear as the most important driving factor in our culture and politics.

Over the last ten years, not only did we live in fear of viruses and poisonous substances, in fear of the economy and the endangered ecology of our planet, in fear of further virtualisation and robotisation, and in fear of fierce competition in the job market, we also encountered the real and global fear of terrorist attacks and therefore the fear of the other, the neighbour, and even the friend.

With the recent economic crash providing the final and devastating blow, we are at ground zero and it is little wonder that people around the planet feel lost. Trust in people was given up with multiple corruption scandals and the irrational killings of students, artists, politicians and people in the street. Like rats living in a place too small, people started actually killing each other. Control and rules are the result.

This immense and imminent sense of fear has largely influenced the creation in the beginning of this century and has dominated the first decade of the 21st century, with an enormous influence on design and art. Immediately, design and architecture started to measure up to hide and protect, sooth and embrace. Thus avant garde architecture is hiding behind constructed veils just like stylish women will want to do, and design is hiding behind a mask, creating secret hiding places and enchanted fairytales in which to disappear, like going through the looking glass of Alice – a very smart Alice indeed. Choosing a life of virtual fantasy, the public will therefore wish to veil, mask and armour buildings as well as interiors and to transform industrial design into magic matter.

The boudoir is back in interiors to accommodate the private sphere of a woman, just as a fashionable woman’s car is refined and confined to let her live out her private hours and fantasies.

Men are hiding behind wrap around sunglasses and branded merchandise. This sense of privacy and protection has resulted in the need for protective skin on our buildings and has brought to Makkum a new domain which lay dormant for a century; the use of ceramic tiling on and in architecture with collaborations with major architects like Ettore Sottsass, Allied Works Architecture, MVRDV, Arcadis Achitecten, Kohn Pederson Fox Architects and Buro Lakenvelder. These made to order skins of buildings are creating a unique character to compete in the ever more cut-throat arena of international icon architecture.

A new and more decorative and colourful cityscape is therefore to be expected. A trend which will grow in the future to give identity to a building, to update an old structure or to personalize a high rise apartment; used as much as a functional devise for finish, absorption and protection as it is for fantasy, colour and creativity. Another domain which is bridging and fusing, between protection and expression and from the individual to the universal.

If expression is in the zeitgeist of design, with a period of eccentric design knocking on our doorstep, the autonomous design market has exploded over the last few years to define a new notion in form: that of a purely aesthetic function. Though design has always incorporated the importance of beauty in its being, the post-Bauhaus world we lived in still placed function at the forefront and encouraged us to feel a pleasurable guilt when considering a piece of design furniture which had much more visual punch and a minimum sense of utility.

From Miami to Basel to Tokyo, the world is currently obsessed with design and the discipline is gaining importance every day; every hour, almost. The auction houses of the world make the prices of autonomous pieces escalate and the one-of-a-kind or vintage industrial is the new object of desire for collectors and landing in the collections of prestigious brands. Hotels, restaurants, clubs and offices are given form by designers with a new vision of public life and atmosphere, introducing brand new visions of things to come. Designing ceramics to fit into this picture.

Design takes its rightful place next to art and is fast becoming the discipline of this century.

Therefore the consumer will access design in a new way and acknowledge not only function but more so emotional and investment value. Recognising the soul in a product. Even the volume business is using design as a vehicle to upgrade its classics, as in Hella’s PS Jonsberg vases for IKEA; similar to fashion’s merging of high and low, leaving the middle market to become a dead-end alley.

With this growing enthusiasm for form, people will therefore conceive their houses and studios in an artistic way with connoisseur connotations. Their home becomes an atelier, a gallery or even a private archive. The consumer will become the curator of his own life, creating a museum house and living a cultural lifestyle.

Lucid and brave, Jan Tichelaar has been there right from the start with legendary timidity and proven tenacity, still re-editing historic porcelain while commissioning contemporary curiosities and functional tabletop for our homes. Working with designers since the mid 1990’s, Jan reached a pinnacle when asking Hella, Jurgen, Studio Job and Alexandre van Slobbe to make an installation of flower pyramids, following a restoration project of an authentic 17th century tulip pyramid at Amsterdam’s Rijksmuseum. These contemporary interpretations piled up high everything which is Dutch design’s strength and tradition: an eye on the past and cultural identity, while turning function on its head with innovative prowess as if already preparing the country’s design heritage of the future.

Faience building blocks for a young century in which architecture will mimic fashion and art will give way to design. A jump start to a time where the theoretic rethoric of last century is less relevant and where endless bounds of fantasy, creativity and aesthetics will surely reign over fear.

Bridging earth and fire under the cool Dutch sky.