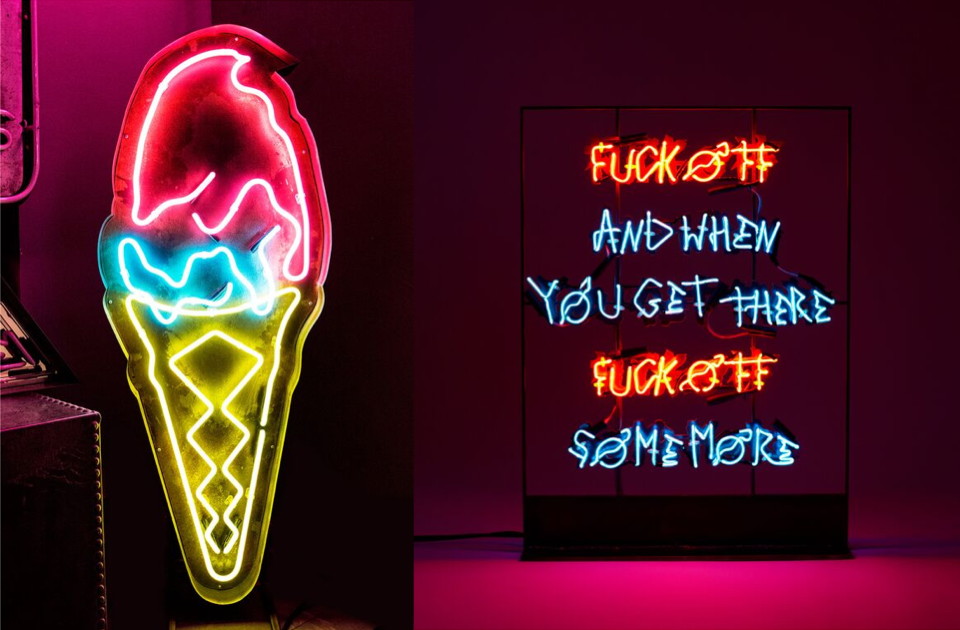 Despite recently facing the prospect that it could be banned permanently, Neon is blazing a new and invigorated trail, through art and advertising campaigns.

Neon lights f​unction as a glowing reminder of the city as a liminal space: suggestive of the many lives and experiences to be inhabited therein. The underwear of the urban worn as flashy, evocative outwear, by the buildings and billboards of the city scape; flaneuring purposefully between the worlds of art and advertising, since the 1920s.

Neon signs have become synonymous with the identity of whole city cultures (Las Vegas, for example) and a widely adopted medium for artists ­ from Keith Sonnier’s neon nuanced representation of natural forms, to the art produced to launch London’s night tube service, in time for 2015 Rugby World Cup ­ yet despite this, neon sign makers have recently fought to stave off a ban that would have shown their art, and all associated manufacturing, the red light, quite literally.

EU legislation which was due to come into effect within the next year, proposed to ban the use of mercury; a move that would have restricted the colour of all neon signs to red, removing mercury’s blue hue from the mix. Fortunately, the British Sign Association, and European Sign Federation, have negotiated an extension to 2020, allowing companies, such as KEMP ­ London’s oldest sign company ­ to breathe a sigh a relief and respond to a real resurgence in the popularity of neon, as Steve Earle, KEMP’s Managing Director, explains: “suddenly neon has become cool a​gain and design studios have recognised the trend. The marketplace is particularly diverse at the moment with work coming in from the large multiples, TV, film, fashion and photographic industries, as well as art commissions from both the corporate sector and private individuals.”

This particular resurgence, could partially be driven by the allure of that which is considered restricted: the possibility of a mercury prohibition, of sorts, injecting an urgency into demand, while reminding us of the continued attachment to the “rebuilt heritage” trend, identified in recent years. In the same way that the consumer continues to reach out to products which evoke a sense of storytelling, manufacturers such as FIAT, recognise neon’s long history: contracting KEMP to create neon pieces for their recent UK wide FIAT 500 campaign. Neon’s enigmatic urban cool and encapsulated romance, continues to remains a blaze with Neon Artists, like Steve Earle, incorporating retro flavour and drawing inspiration from vintage sources: “One of my latest pieces combined a beautiful old patterned Victorian toilet pan with lemon yellow neon glass, entitled T​he Shit has hit the Pan.”​

As London’s oldest established sign company, at what point did the creation of custom­made neon / illuminated art works become part of the studio mix and since this introduction, have you seen a growth in the demand for such works?

We have been manufacturing neon at Kemp’s for the best part of 70 years and during this period we have seen the popularity of neon go full circle on more than a few occasions, recently we have had major concerns that neon was going to be banned completely with new EU legislation banning the use of mercury due to come into effect within the next year, fortunately the British Sign Association with help from colleagues in the European Sign Federation have managed to negotiate an extension to the new regulations coming into force until 2020 which has allowed us to breathe a sigh of relief here at Kemp’s as currently we are experiencing a real resurgence in the popularity of neon, suddenly neon has become ‘cool’ again and design studios have recognised this trend. The market place is particularly diverse at the moment with work coming in from the large multiples, TV, film, fashion and photographic industries, as well as art commissions for both the corporate sector and private individuals.

Are there any common themes / trends among the commissions you receive and / or any aspect particularly that you could identify as being frequently requested ?

With Kemp’s being based in the heart of the UK’s largest creative community in Hackney, East London we regularly receive work from the many local and internationally acclaimed artists and creatives who come in to see how we can assist in turning their drawings into neon reality. Apart from the artistic side of things we regularly make neon’s for photo shoots, film and T.V., recent projects have included neon for the national rollout of the Fiat 500 ads and Nike photo shoots.

Talk us through the process (at KEMP) of creating a neon / illuminated piece: from commission, to actualisation.

Quite often the client will present us with nothing more than a very rough pencil sketch of their idea or concept, from this sketch we would normally enlarge the drawing up to full size and draw the glass onto the design in the required diameter that we intend to bend. The drawings areor argon gas depending on the colour required. Block­out paint is applied to certain sections of the glass that are not to light and finally the glass is aged by connecting it to a transformer to ensure the gases stabilise. done in mirror image and are used as a template to bend the glass in a hot flame to the required shape, each glass section is electroded at both ends before being connected to the vacuum pump to remove air, a very high voltage is then passed through the tube to burn off impurities and anneal the glass. The glass is then pumped with either neon.

Is there a particular project that stands out / is a company favourite, and why?

We were certainly enthused here at Kemp London when Transport for London approached us to manufacture neon artworks for the launch of the night tube service in time for the 2015 Rugby world cup. The neon commissioned was to be representative of the actual tube lines with the glass crossing above and below each other creating an amazing tube map, the neon was initially displayed at the top of the Shard reflecting in the glass over the London skyline and was visible from across the City. The neon’s later went on tour being displayed at various iconic locations across London.

Are there any particular designers / reference points that your creative team regularly use as inspiration when creating a new piece?

When creating my own neon artworks I normally draw inspiration from vintage items of yesteryear giving the artwork a blend of the modern mixed with a retro flavour.I quite often upcycle old enamel signs that are between 50 and 100 years old mounting them on aged mild steel mounts and facing them off with neon highlights. One of my latest pieces combined a beautiful old patterned Victorian toilet pan with lemon yellow neon glass entitled ‘The Shit has hit the Pan ».


Becky Willoughby is a UK based Fashion Writer and Digital Content Curator with a passion for cutting edge, young independent design. She contributes to magazines and trend agencies, focusing on cool kids and cultural innovation. Excited by all current and emerging symbiosis between visual and material futures, she Co­Curates Ello’s official community about tech, culture and innovation, ‘Ello Future’ and is a Staff Writer for Fizzy Mag, in Germany. 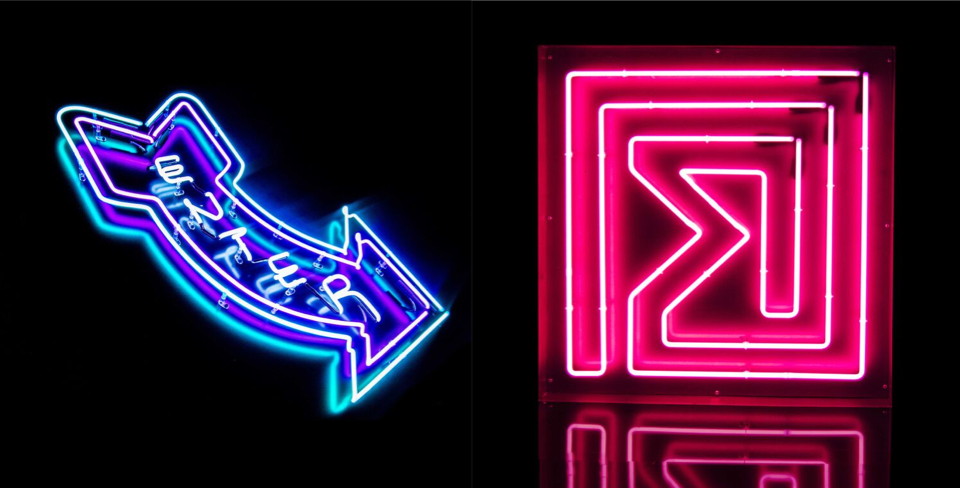 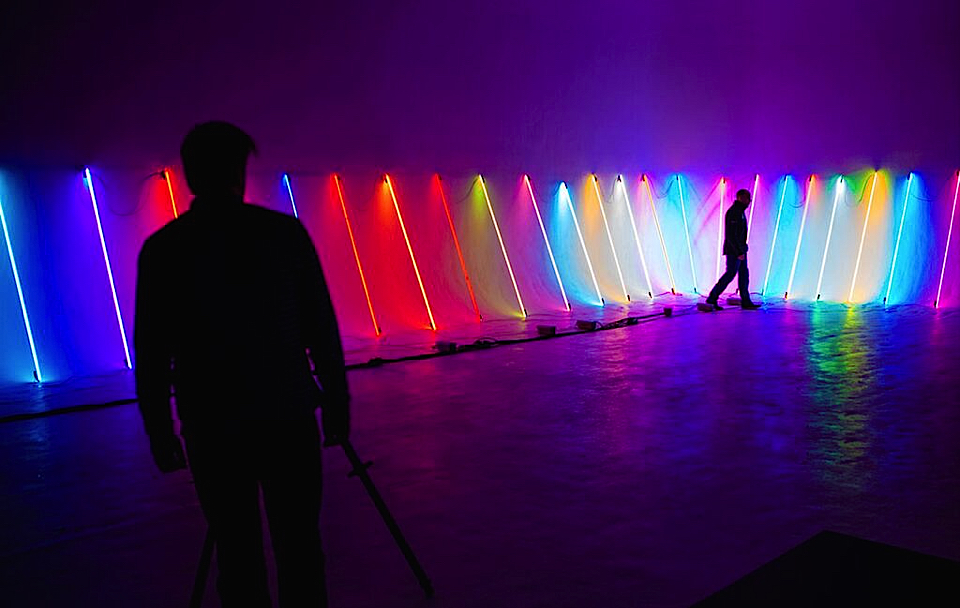 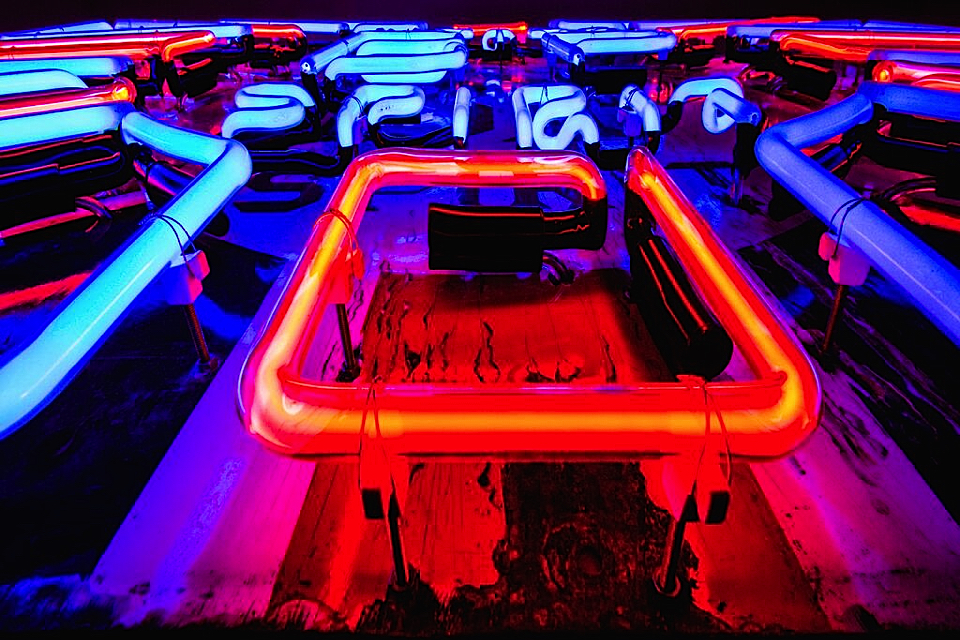 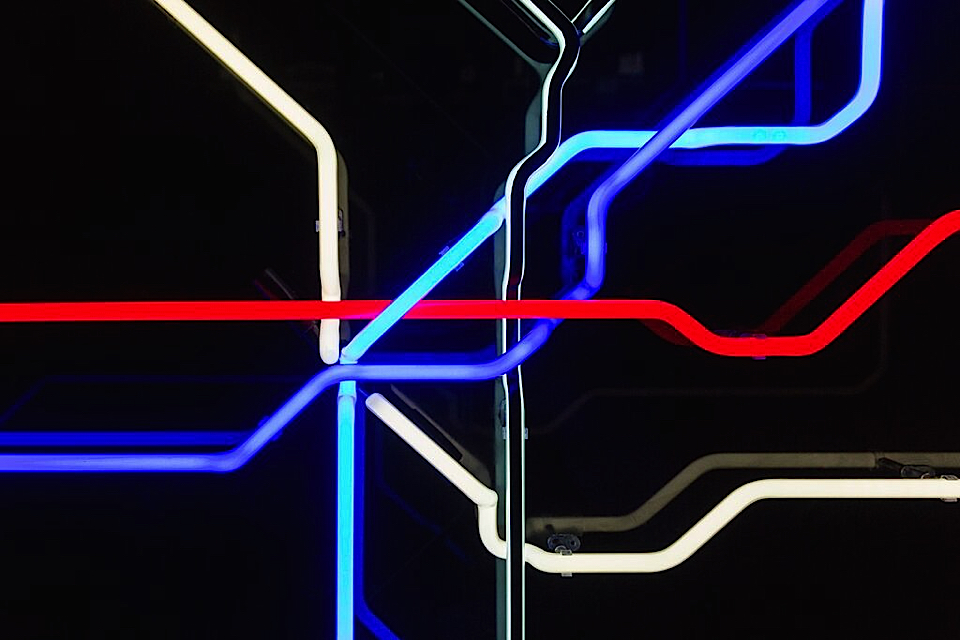 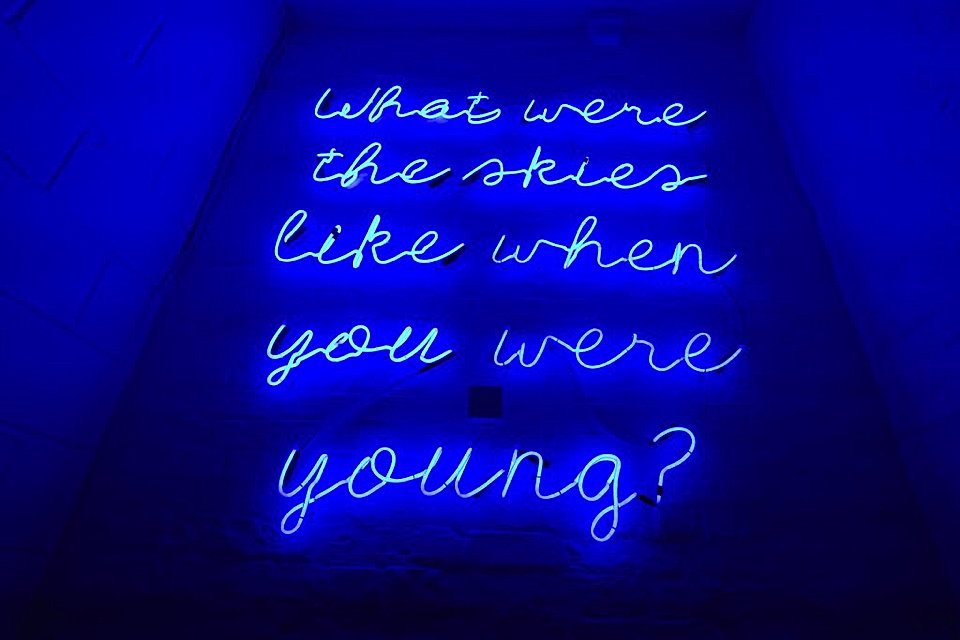 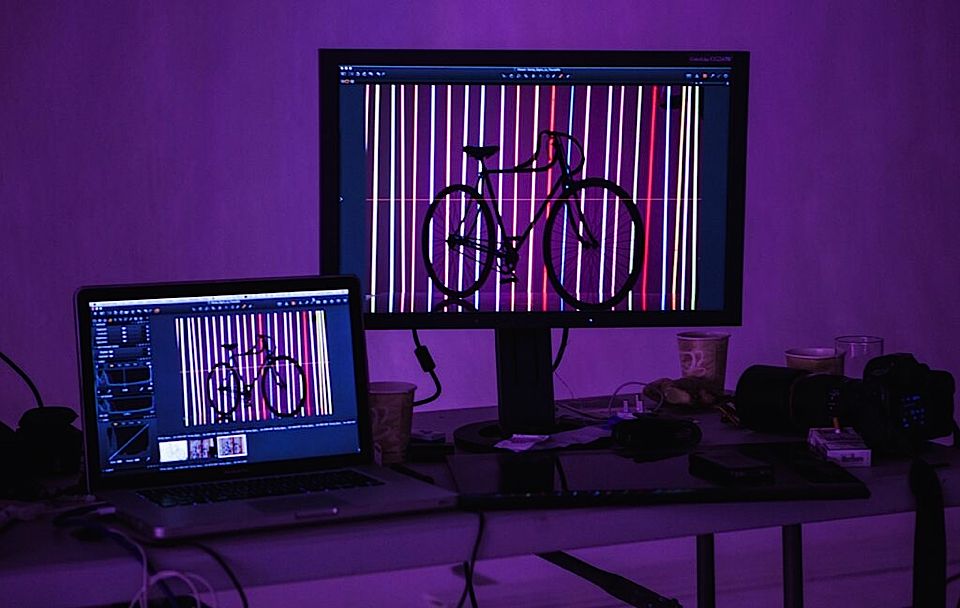 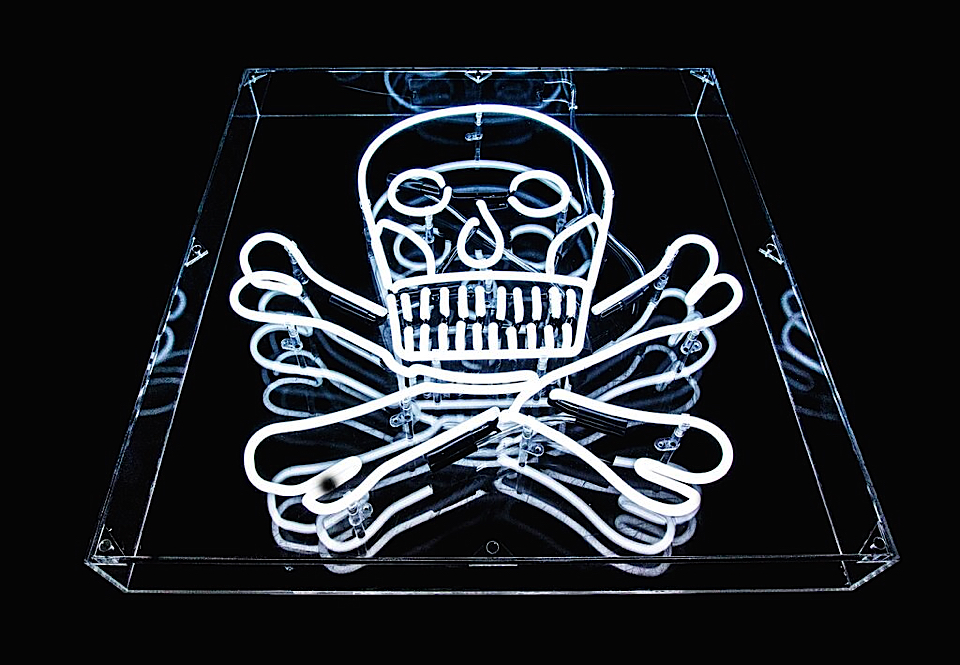 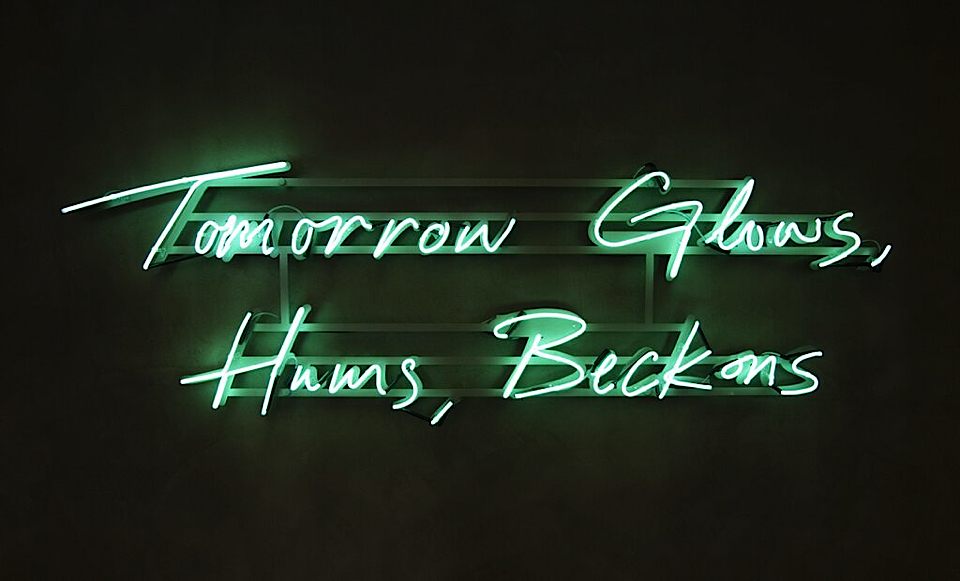 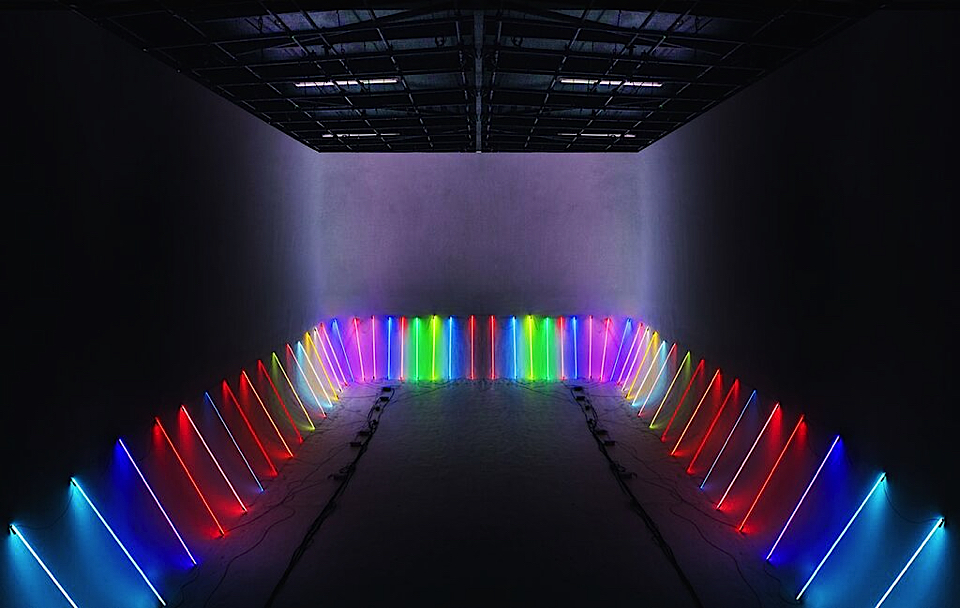 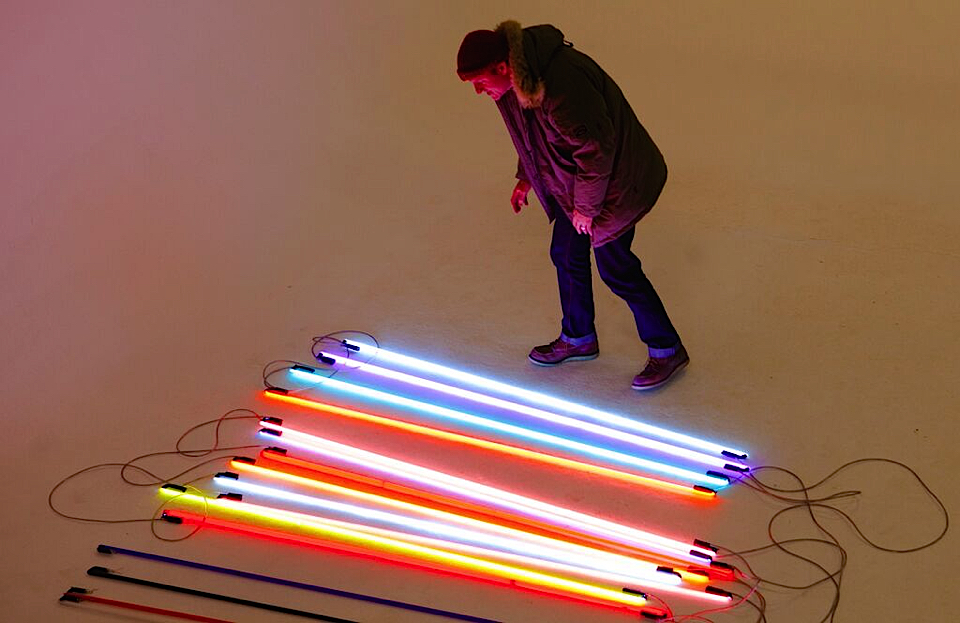