the right to remain silent 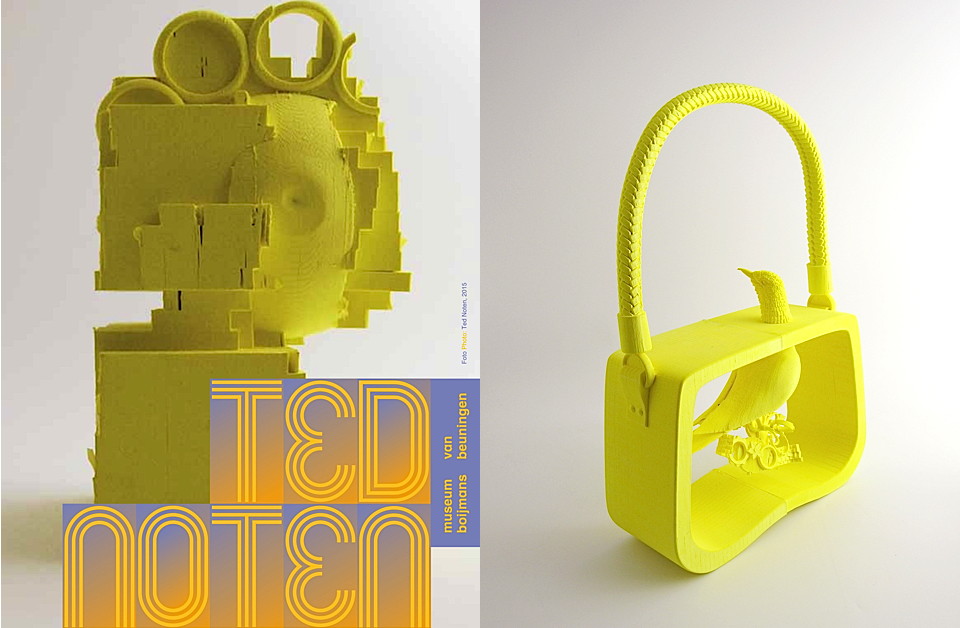 With any deconstruction comes creation. Several months ago a moving truck arrived at Atelier Ted Noten and transported everything in the workspace of the Dutch artist based in Amsterdam to Museum Boijmans van Beuningen in Rotterdam. From the contents of his atelier, ranging from furniture to machines, sketches and prototypes, a tower was constructed. Noten sets himself free from strongly-held beliefs and behaviours by emptying his studio space. Lost for words he now spends time in his ‘Non Zone’ developing a new alphabet.On a daily base an update from his atelier is send and printed for display in the exhibition space of the museum.

The installation, Ted Noten’s own ’Tower of Babel’, is the centre piece of an oeuvre exhibition of the artists turned sixty at the Boijmans van Beuningen. The stacked tower is accompanied by a series of yellow paper replica’s of the jewellery he has made over the past ten years and a museum gallery space which is filled with a mound of sand and mechanical digger that can be controlled by the visiting audiences on sundays. Noten did not approach the exhibition as a literal retrospective but as tool to progress his future.“I don’t want it back.” Noten points out to curator Annemartine van Kesteren and me. “I need more time. Sitting in an empty space is what I want to do right now.” The artist refers to the relatively short period of time he has had since the exhibition opened and the pressure of the outside world he already felt. “I think the most frequently asked question I get from people is what the result of the Non Zone is thus far and when they can expect new work.”

For Ted Noten the collaboration with Boijmans van Beuningen is about breaking his habits by not having the regular impulses around. The tools and materials of the artist have defined the vocabulary of his artistic practice for several decades, now is his time to remain silent.

The aesthetic language of Noten’s work varies from gold-plated pistols encased in acrylic resin to 3d printed rings and interventions on Prada bags.

Paradoxically, instead of experiencing freedom in his Non Zone the artist instead has become very aware of the restrictions of his profession and career and the public hunger for newness. His audience seems to want more and wants it now.

Annemartine Van Kesteren, design curator of the museum: “Ted Noten’s installations in the museum are an intervention in our regular programming. The idea of an exhibition that generates a new work ethic appealed to me. We are curious for the results on the long term and hope to contribute to it with this exhibition.”

As Noten wants his new ways of working to evolve gradually so did the invitation for the exhibition at Boijmans van Beuningen came about. He sent a postcard from the museum shop, depicting The Tower of Babel by Pieter Bruegel on the cover, to the director of the museum requesting it for a loan for an earlier exhibition he was curating. Sjarel Ex met with Ted Noten and gave him a ‘no’ for borrowing the masterpiece, the conversation did however end up in the installation of Noten’s own tower of stacked items from his atelier and two new projects presented in the museum.

Next to the tower a dark room with gold coloured furniture showcases a selection of objects created by the artist in the past ten years, all 3d prints constructed out of layers of yellow paper. This monotone series of reproductions are an iconic example of the mindset of the artist as we know it today. “What is value? What is originality? What is the difference between an original and a reproduction? Isn’t art always a reproduction of an idea or a perception? These are questions that preoccupy Ted Noten.” states curator van Kesteren.

“Should all my actions lead to a product?” Ted Noten wonders.

Ted, you have the right to remain silent. Everything you say can and will be held against you.

On the 16th of October 2015 Ted Noten’s ’Tower of Babel’ will be dismantled, students can apply for a scavengers hour and an auction for collectors and those interested takes place. 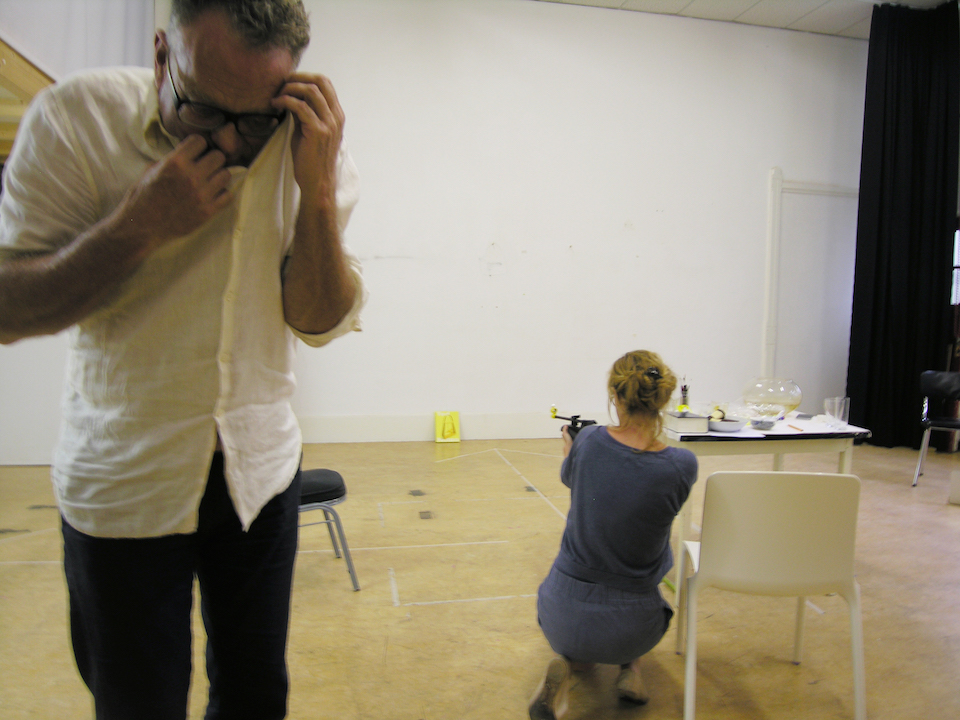 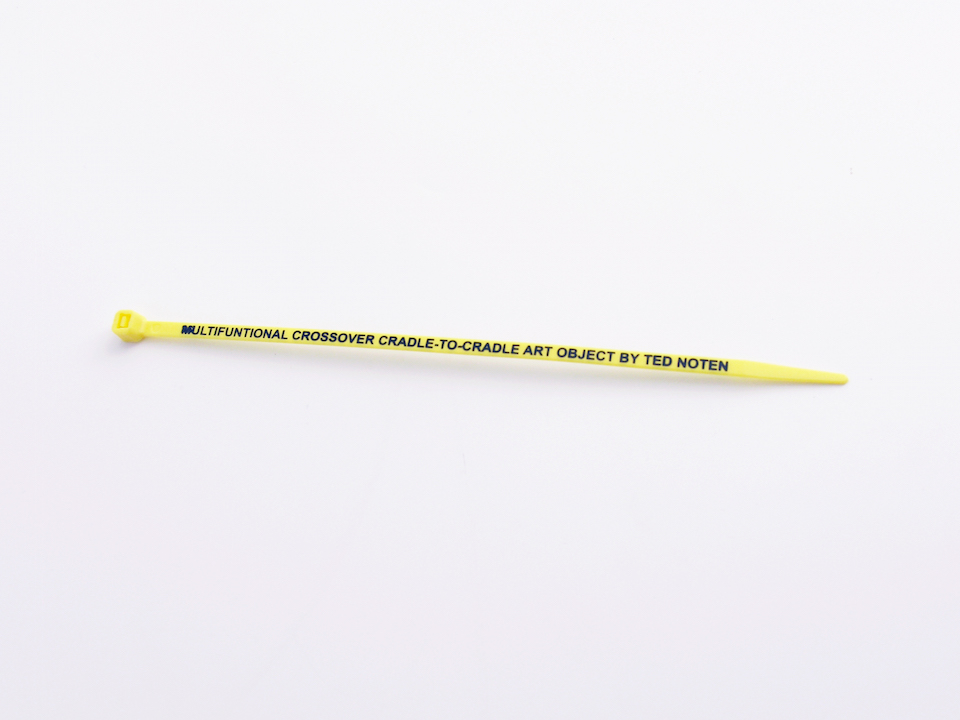 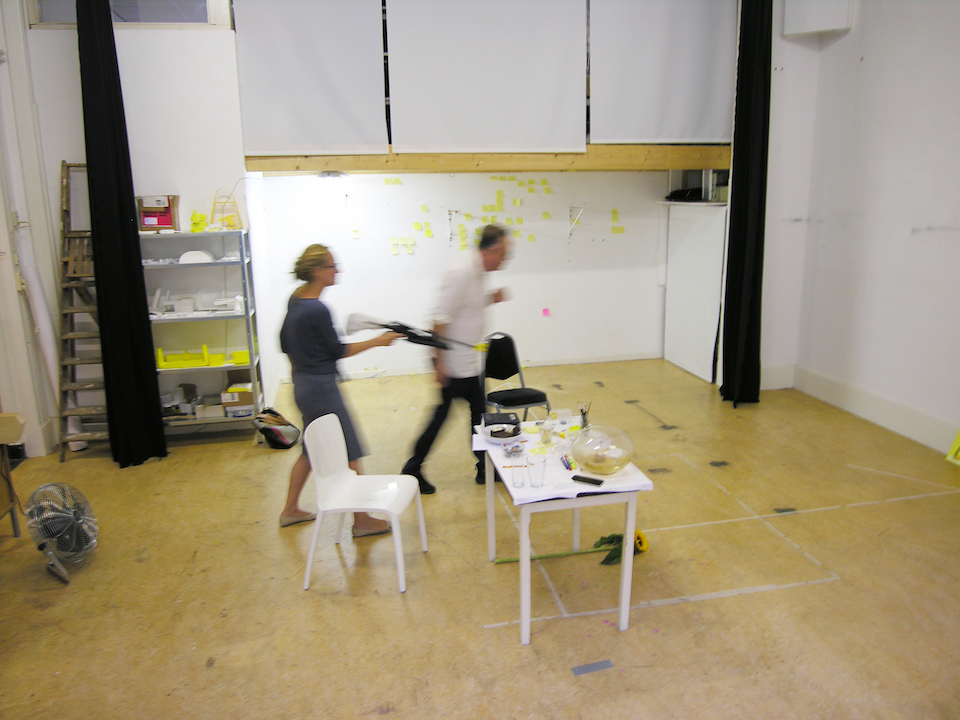 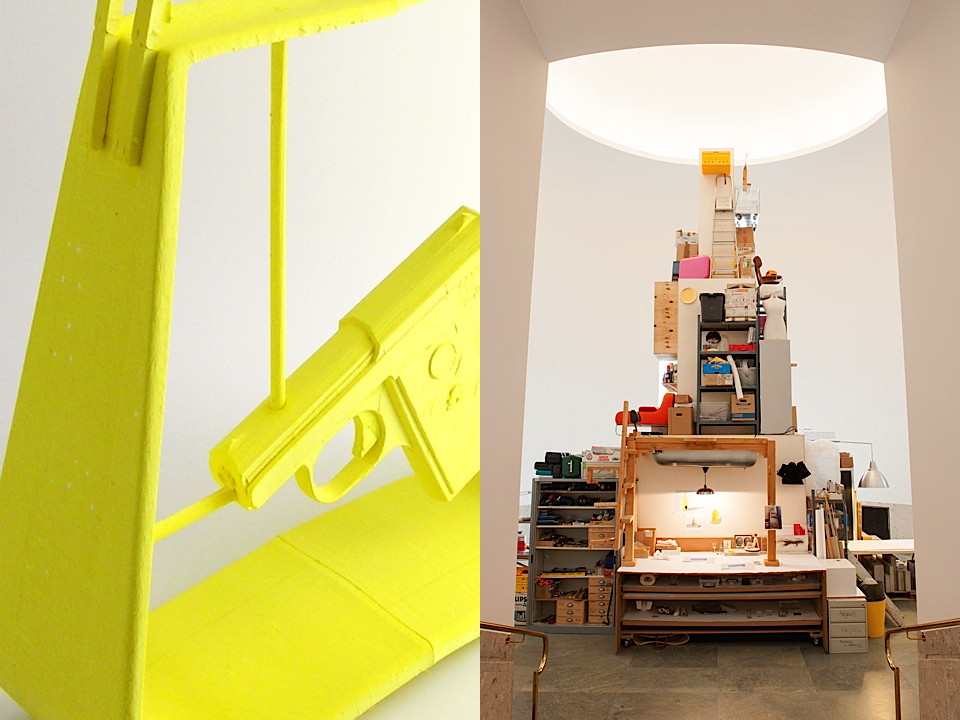 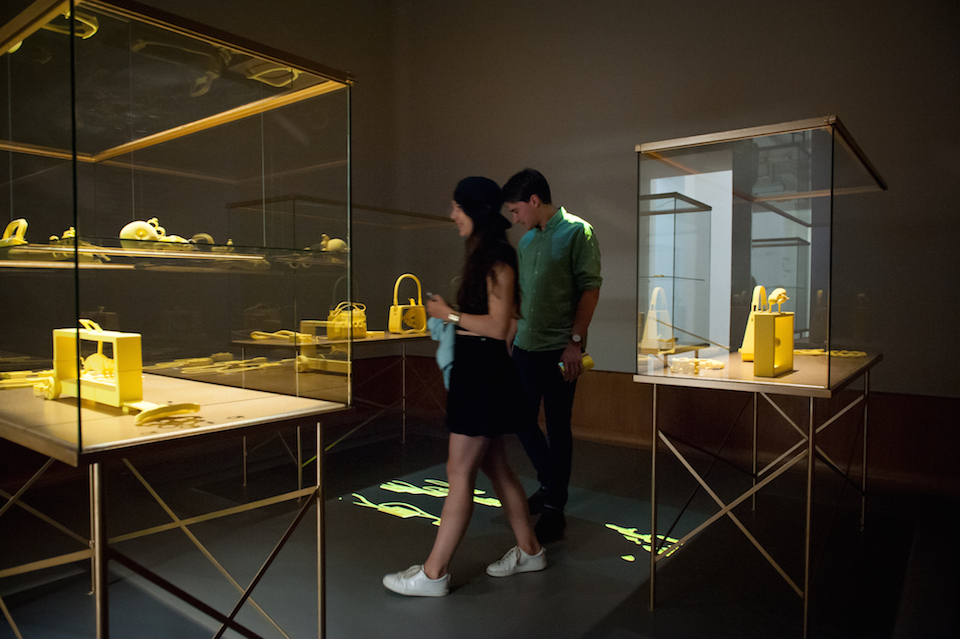 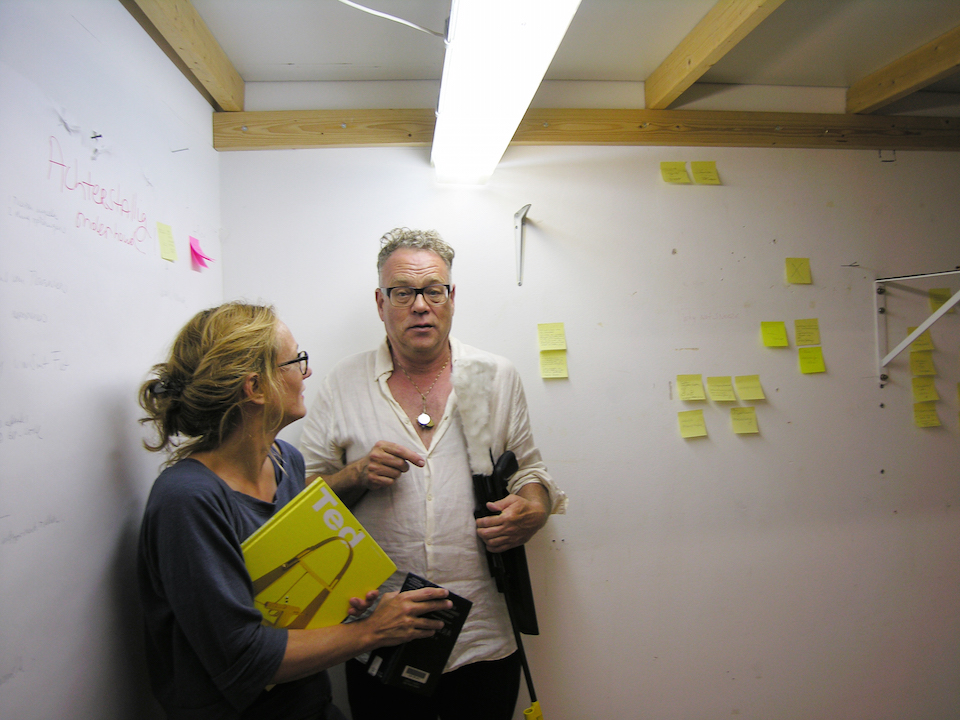 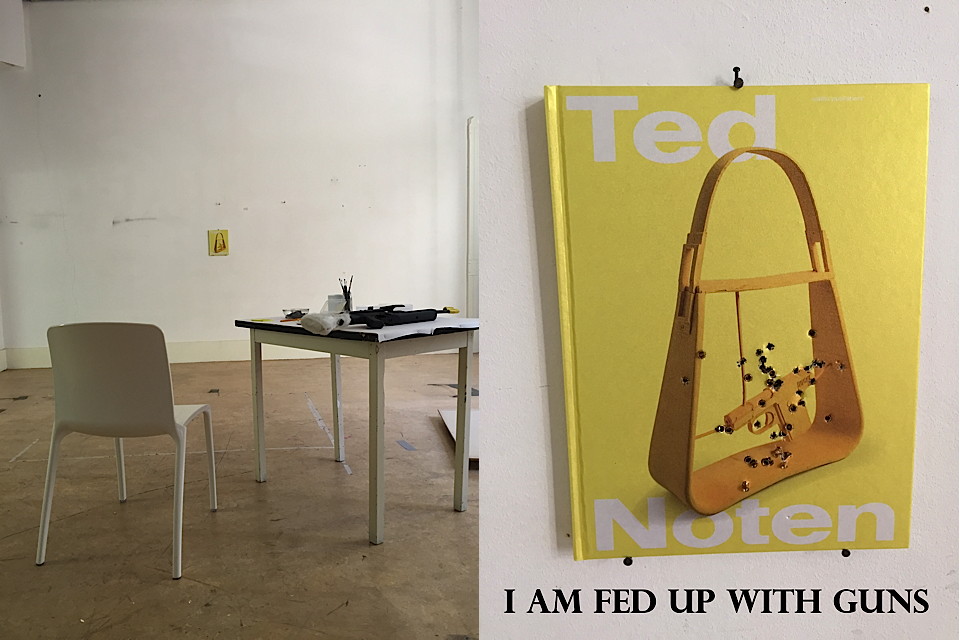