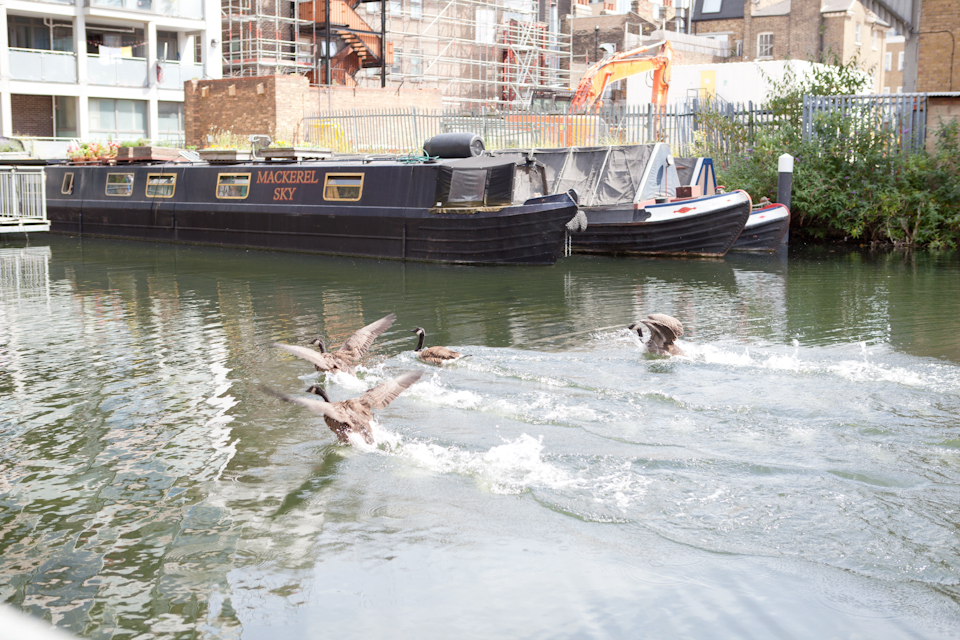 If you think about the countries that are most interesting talking about food, you would never mention London in your list.

it’s maybe because of the lack of a proper gastronomic culture that Londoners are more openminded and conscious than others about what they eat and where the food comes from. Its weakness became its strength

Many exotic food influences have been seriously taken into consideration – from the steam cooking tradition of Chinese kitchen to the health significance of Indian spices to the power of secret powders from Mexico.

I grew up eating my way around the world because my parents are obsessed foodies – a nutritionist mother and a cook father.

I’ve been living in London for two years now and as Italian with a french background, It was really surprising to discover how healthy Londoners are. I have so many vegetarian and vegan friends who follow a really strict diet and they still have a wide choice here as anywhere else in the world. It’s quite usual to see in Londoners’ kitchen ingredients that you’ve never seen before as it’s common to listen to people asking the food origins before to order or reading the food etiquette at the supermarket.

I live in the east side where Healthy Shops and Farmers Markets are literally ‘mushroom growing’, occupying the most inspected places like School Gardens, Churches or Yoga Homes. I love having lunch in cosy and healthy restaurants as well as buying local products at the market during the week end, that’s how me and my friend met these three amazing woman and we fell in love with their business!

Camilla Ginevra Bo’ is an Italian architect and freelance journalist. She gained her degree in architecture in Rome, spending two years of the course studying in Paris.  In September 2012 Camilla moved to London to study Art Direction for Fashion at Central Saint Martins. Since completing the course she joined SHOWstudio: The Home of Fashion Film as the Gallery Assistant and she is now working as a freelance contributor for different magazines and as Art Director for 19 greek street in London. 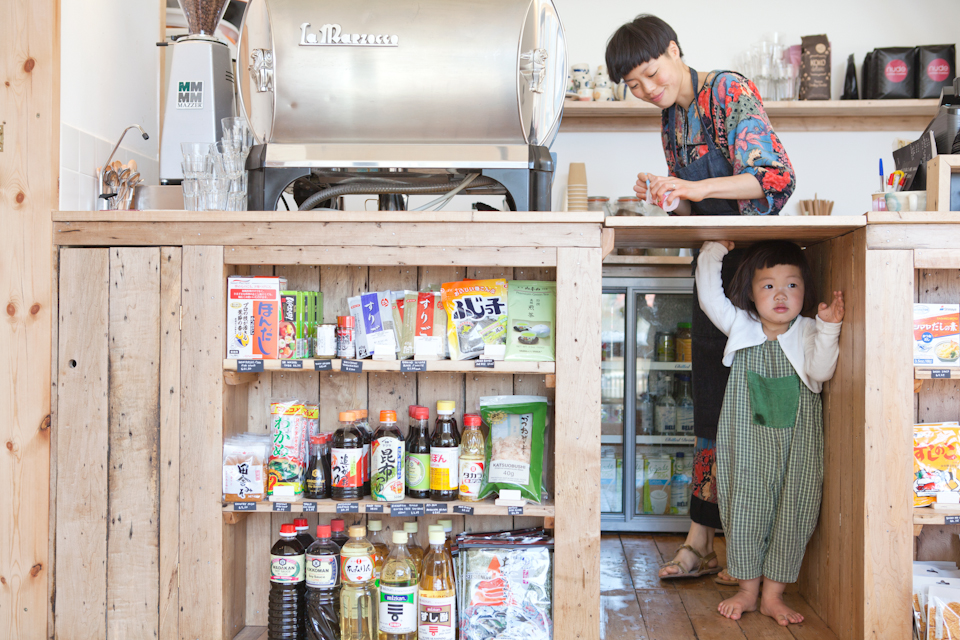 Winter is the season when time slows down and days become shorter, windows are covered in condensation from the inside heat; the smell of wet wood saturates the air.

Organic and tasty food, a good book to read, cold light and silence. Our idea of a better life is where time stops and things become simpler.

Surrounded by houseboats and swans, we found the perfect place to escape cold days, a Japanese cafe nestled in a courtyard facing Regent’s canal. Yuri, ow- ner, chef and Nono’s mum, chose the name Toco Noco according to the Japanese concept of a child’s playground.

Everything is handmade here, from the wooden furniture to the porceilan cups and saucers. Natural elements such as tatami and tree branches share the space with glass and concrete.The pillowcases, sewn by Yuri, have the colour of traditional japanese ingre- dients like matcha green tea and the special burgundy of sweet beans.The fully glazed windows let the cold winter light in.

All you need now is to smell the delicious butter cookies with dried, salty cherry blossom and poppy seeds.

We decided to come once again to our favorite spot in east London asking its lovely owner to tell us the story of this magic place where swans, kids and raw fish come together. …And to ask her the recipe of her famous matcha blondie! 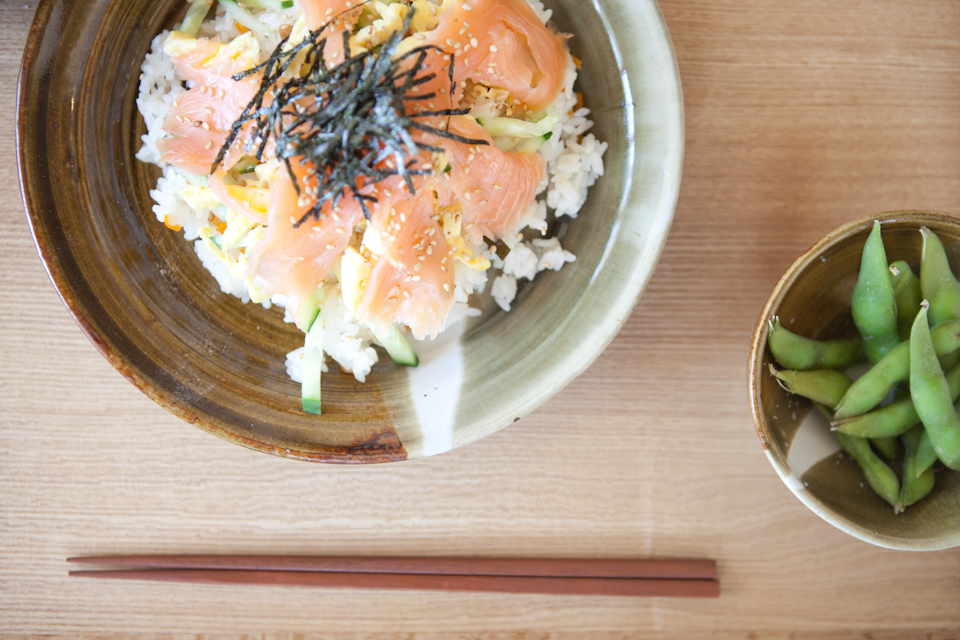 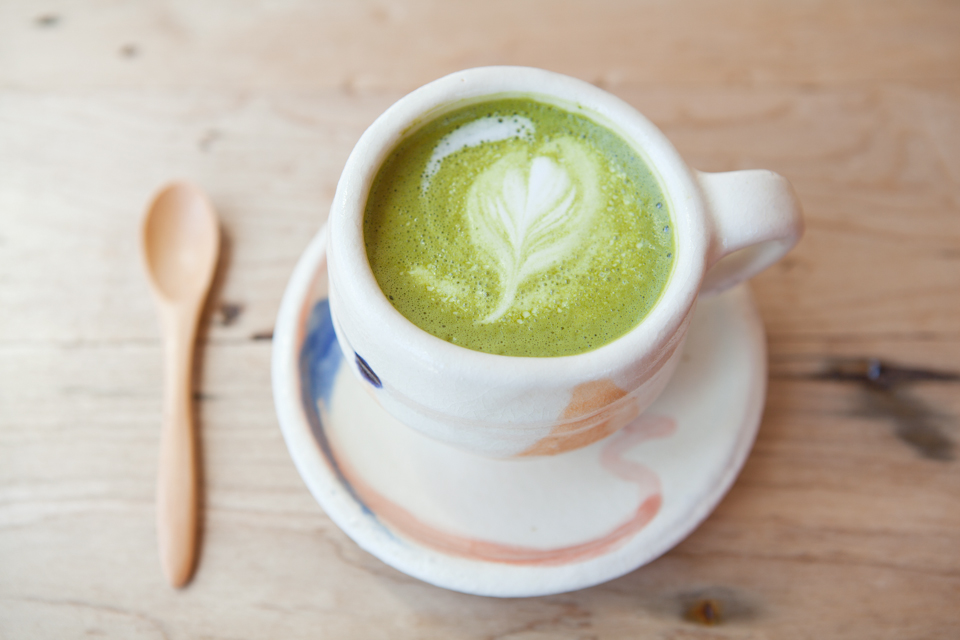 They are the Queens of Cans. Their names are Olga and Dina and they are overflowing with warmth and personality.

We spent a Monday morning with them at their shop ‘A Portuguese Love Affair’, recently opened in the middle of the Flower Market in Columbia rd. And this is precisely what it is: a love affair with fish, cork and porcelain. Their project was in embryo for some time and initially the idea was to go back to their roots in Portugal and open a shop there. Luckily the couple decided to bring Portugal to London and conversely they now feel even more strongly connected to their country.

From their homeland they choose products in which they believe the most, from food to design through to soaps. However, you can also find wooden tambourines and notebooks whose pages are paper tablecloths, the typical ones in Portuguese restaurants (Serrote). And then brushes and shaving cream, toothpaste of the same brand used by Olga’s grandfather (Couto). Their selection criteria s very attentive to tradition, for example, they show me their selection of canned fish and the variety is very wide. In Portugal, the culture of fishing is one of the engines of the country. I asked both what their favourite items for sale are.

Olga’s one is Santa Catarina’s tuna. Santa Catarina is an example of sustainability: this factory uses the ‘rod and jump’ technique, which involves pulling the fish aboard with one motion, making it jump.

The larger the fish, the harder the manoeuvre, and experienced hands are needed to win every battle. It’s a one to one duel, unlike what happens in the trawler fishing practiced by large commercial fleets. Dina instead chooses the decomposable fruit bowl designed by Amorim, a pioneer and leader in the cork industry ever since the 19th century. They explained to me that Portugal is the largest exporter of cork in the world. Telling me about its qualities, they actually point out that Cork is a natural raw material harvested cyclically from trees without harming them.

This is one of those realities where aesthetic, tradition and sustainability come together bringing to light a lot of memories. It’s a shop, but more than that it’s a place to visit where you can really trust the owners and you’re more than happy to share this commitment to quality and to Portuguese heritage. 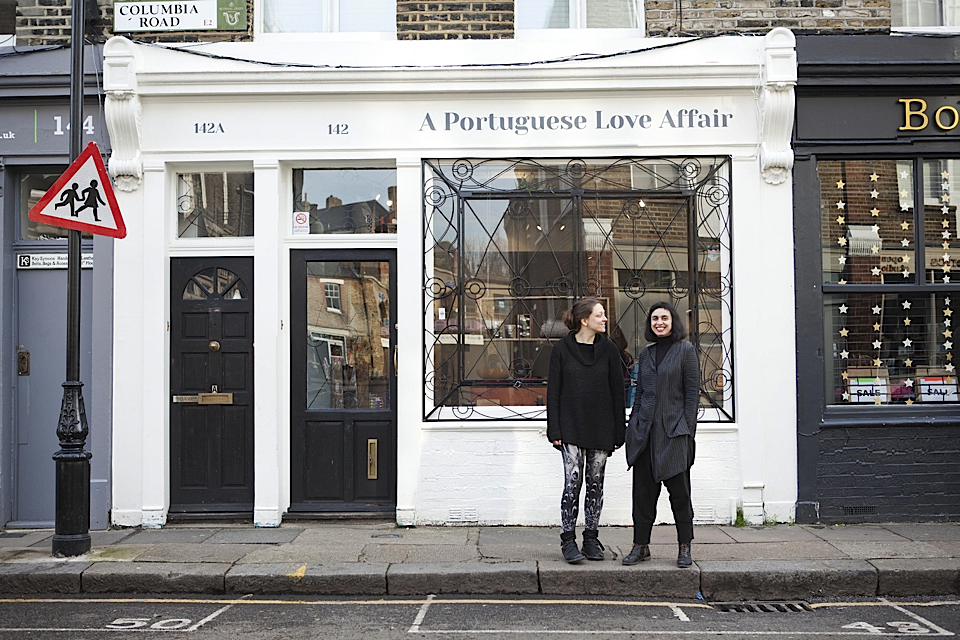 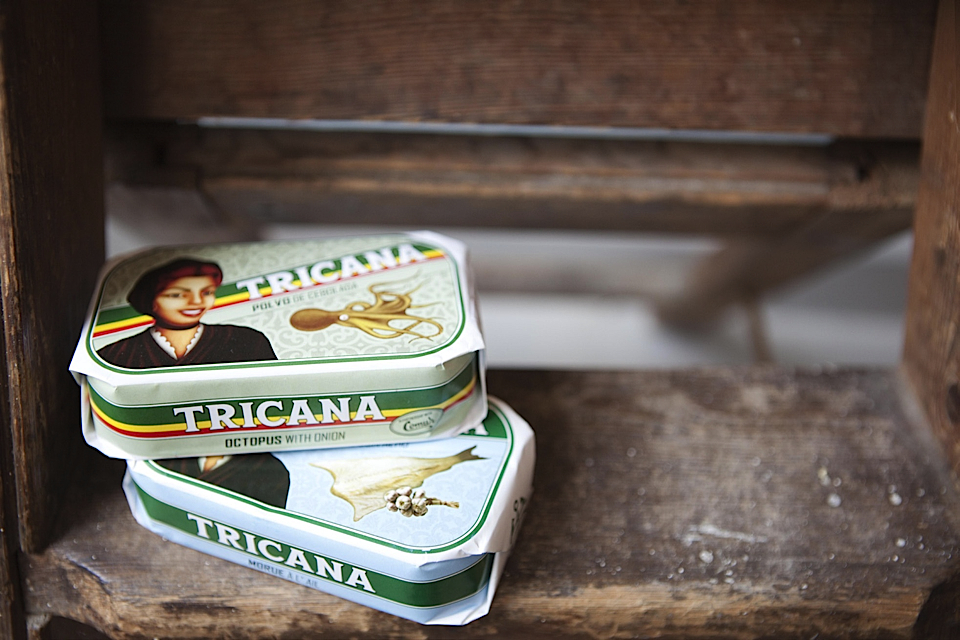 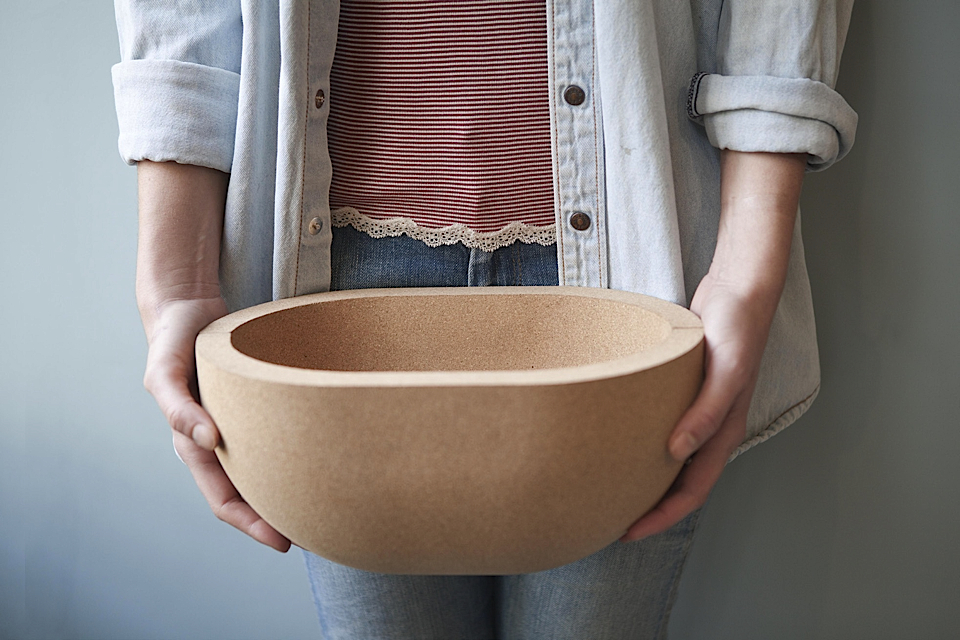 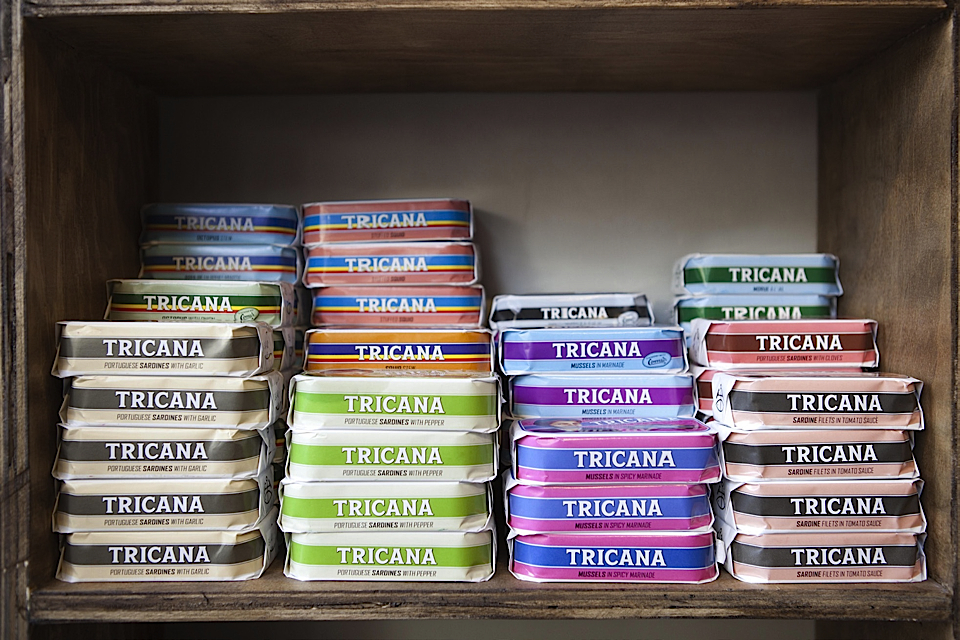