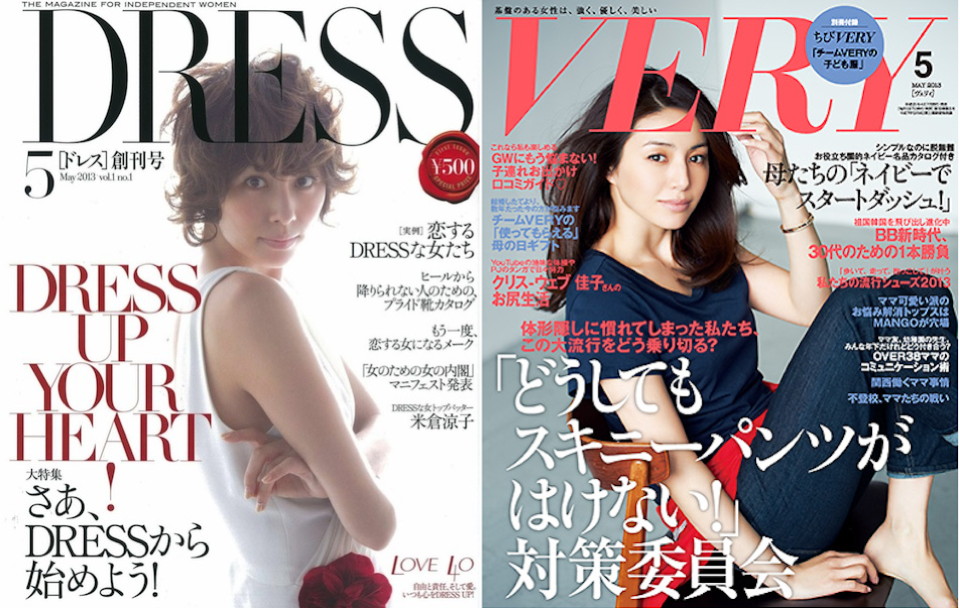 It is about a woman around 30 to 40 years old. As I look over the shelf in the book store, especially fashion magazine, it’s obvious that there are two visions there.The Japanese version of foreign magazine like Vogue and Elle. But, two magazines are more interesting: one is “Very “and the other is “Dress”. Both magazines target a woman around 30 to 40 years old, who is wealthy enough to afford a Chanel bag but not super rich still.Those two magazines have totally different approach.

“Very” targets a married women managing kids and a professional career at the same time.This magazine’s catch copy is “women with certain background (family) are specially beautiful”. Naturally, the issue is mixed with fashion for the work and fashion for mama, special column about job and economy at the same time deep discussion about pregnancy or best kindergarten list for kids. The highest position of this hierarchy is the women with kids and career, so that the money issue is about how to start your own company.

On the other hand, the new magazine called “Dress” targets a single women who have career and enough money to use for herself. Her partner/ boyfriend is 8 to 10 years younger than her but she also enjoys being alone. She is still interested in marriage but she doesn’t find it really necessary. Its catch copy is “ the magazine for independent women”.The fashion issue is very “dressed up”, not any relaxing denim or jersey, only dresses and dresses. Special column about a bar where you can enjoy cigar and anti-aging cosmetics.The money issue is about how much we should save before retirement.

What I found very interesting in those two magazines is a high-heel shoes issue. Both magazines are treating the same topic during the same month: “ you can run with these high- heel shoes!”. But in “Dress”, the situation is in the office and in “Very”, it is in the park with kids. Same brand, same shoes, same age target but  avery different motivation for shopping.

These magazines sell pretty well. As the young generation is less interested in fashion or they simply cannot afford it or they take information not from magazines but from the web. I see that the main target for fashion magazines is now around 30-40 years. There are two totally different point of “happiness”, “ the goal of women’ life”.

For the season of 2013-14 AW “SHOPPING”, Lidewij Edelkoort has forecasted the necessity of restructuring department store and targeting consumers ( we cannot categorize women like “young”, “adult” and so on). Today,  after a long term economy crisis and disasters shock, we are more precise with shopping and we care more for our happiness.“What we need”, “how we want to be” become more and more specific.

Then, I start to think, what will be next? Two types of women, single or family. Then what? Yes, we can “forecast” other new categories!