In the 13th Architecture Exhibition in Venice (in its final days until November 25, 2012), director David Chipperfield’s idea of a Common Ground mirrored the connectivity of our times, providing us with the interesting threads that will bind tomorrow’s world.

The Biennale’s theme was summed up at the entrance to the Arsenale by Norman Foster in ‘Gateway’, a multimedia installation with projections of architectural images juxtaposed by swarming texts, with photography of newly emerging and often crowded urban centres: the texts detail the names of architects and designers who have influenced the architecture since antiquity; the flashing images confronting the audience are brought together by film-maker Carlos Carcas, denoting the common ground that connects us in and around buildings. The intended meaning of architecture was also considered in another projected installation there, by London-based Iranian-born Farshid Moussavi, proposing that categorization should be determined by the affects a building has on us.

The human figure’s place in history was studied by Peter Märkli (Switzerland) in collaboration with Steve Roth, in response to both the pillars of the Arsenale and the presence of columns throughout art and architectural history.

At the other end of the spectrum, Zaha Hadid placed her new ‘Arum’ forms in lineage with the pioneering work of Felix Candela and Heinz Isler, supplementing them with a beautiful material wall displaying the shells and shapes of other recent structures from her studio.

The idea of interactivity with a site was expressed in different ways throughout the Biennale, captivating, engaging and informing visitors all at the same time. Architects that interact with the constructions around them, as poetically explored by Sheila O’Donnell and John Tuomey (Ireland), who reflected on the intellectuality and physicality of important architectural contexts. ‘Folk-in-a-box’ by London-based Cristina Monteiro and David Knight took place in different venues during the Biennale’s opening week; a performance pop-up space-for-one in which to experience a single acoustic song (this mobile mini-theatre also doubled as an open bar afterwards). Elsewhere, at the ‘REVISIT’ installation from Cyprus, members of the public lay back in beach-chairs to consider how tourism can become a regenerator of public space, rethought by visitors and locals alike. 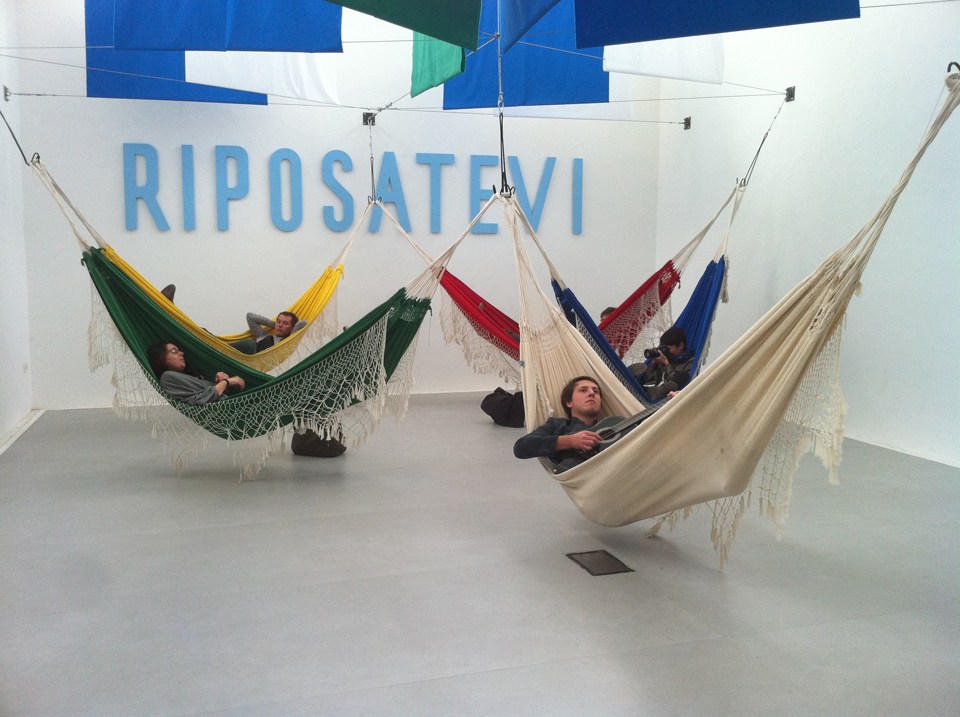 In the Brazilian Pavilion at the Giardini, guests were even invited to relax in hammocks at ‘Riposetevi’, possibly taking up a guitar to play a tune, resonating the importance of leisure, rest and reflection when considering architecture.

As the great Brazilian modernist Lucio Costa (to whom the installation is an homage), said: “The same people who rest in hammocks can, whenever necessary, build a new capital in three years’ time.”

The idea that that space in unused buildings needs to be reconsidered was addressed by Petra Blaisse at the Dutch Pavilion, circling the visitors along a choreographed path, also illustrating versatility and ephemeral space. If these textile walls could talk! 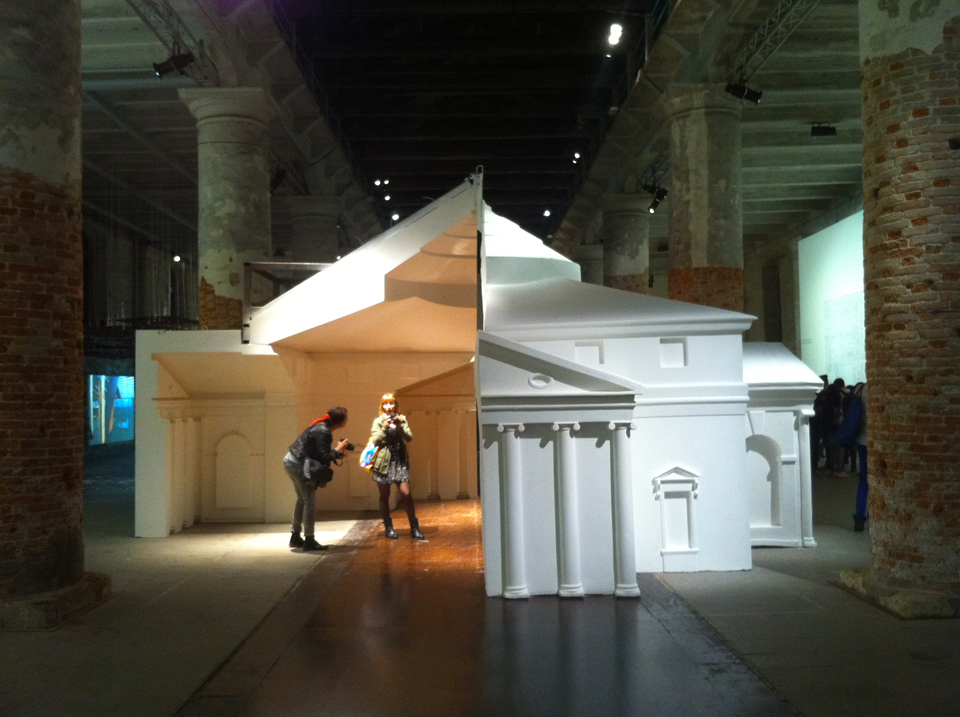 At the Arsenale, London-based collective FAT addressed mimicry and citation through a large scale model of Palladio’s Villa Rotunda and a ‘Museum of Copying’ which questioned the integrity of originality while still celebrating open references.

On show were ‘Architectural Dopplegangers’ (architecture which is considered fake or a replica), while multiple collections of ‘Copycat’ objects were also assembled by Cino Zucchi (Italy). Copyright is an issue at the centre of creativity in all domains today. 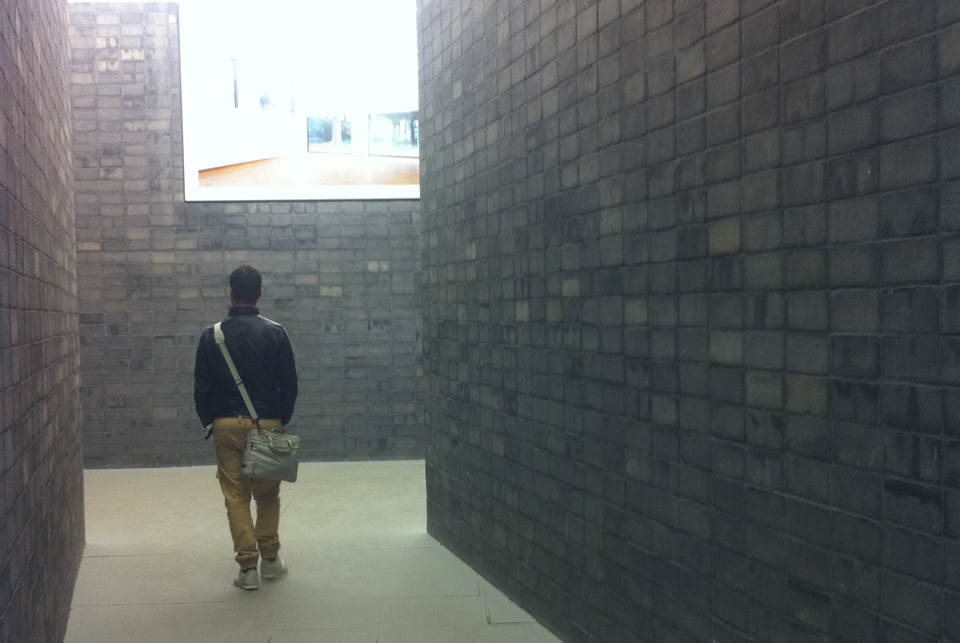 The continued revival of bricks was displayed in a collaborative work by Indian-born, Australia-based architect Kundoo; she gave Indian craftsmen and Australian students the possibility to recreate a 1:1 representation of the ‘Wall House’ she first created in 2000.

In response to the opening of a tunnel linking the Amazonian basin to the Pacific, Enrique Bonilla di Tolla asked 30 Peruvian architects to envision new dwellings for the desert, inspired by the millennial structures of mud houses in Moche. Kuehn Malvezzi (Germany) created an interesting hexagonal gallery in the Italian Pavilion at the Giardini, slowing down the flow of visitors with stacked slate bricks. 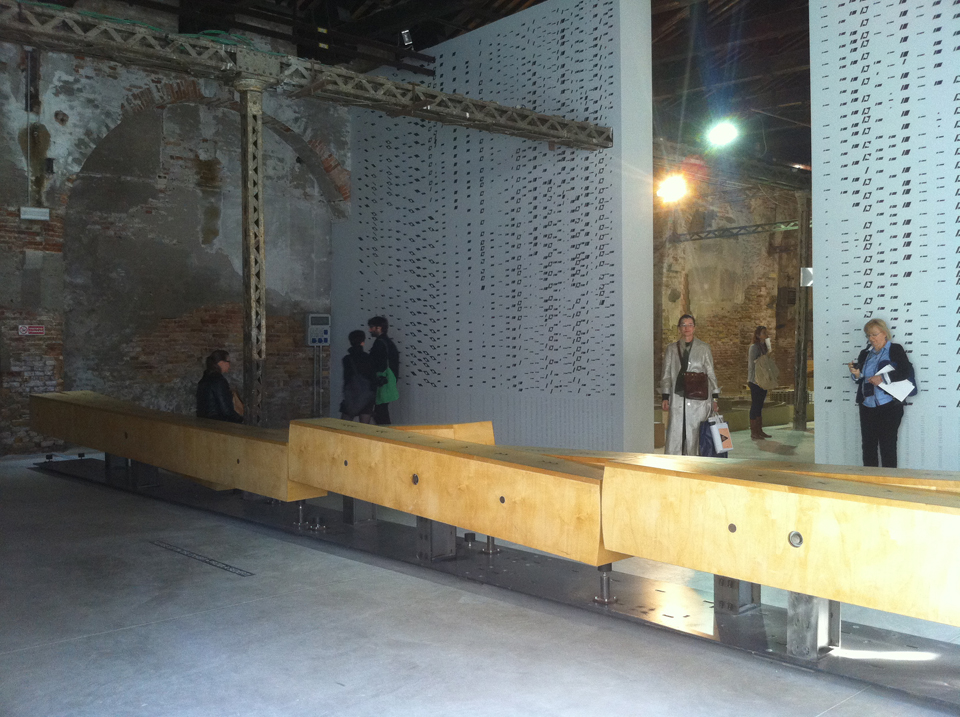 Heneghan Peng Architects (Ireland) asks questions about architecture’s conceptual rules through the measuring of water levels, referencing both Venice and the Nile river, and told through an oscillating bench that moves at different heights whenever visitors sit on it.

The buildings of Manfred & Laurids Ortner (Austria) were featured in beautiful chalk portraits in the Italian Pavilion. Their ongoing conception of a new acting school in Berlin is being rethought through the eyes an actions of young students.