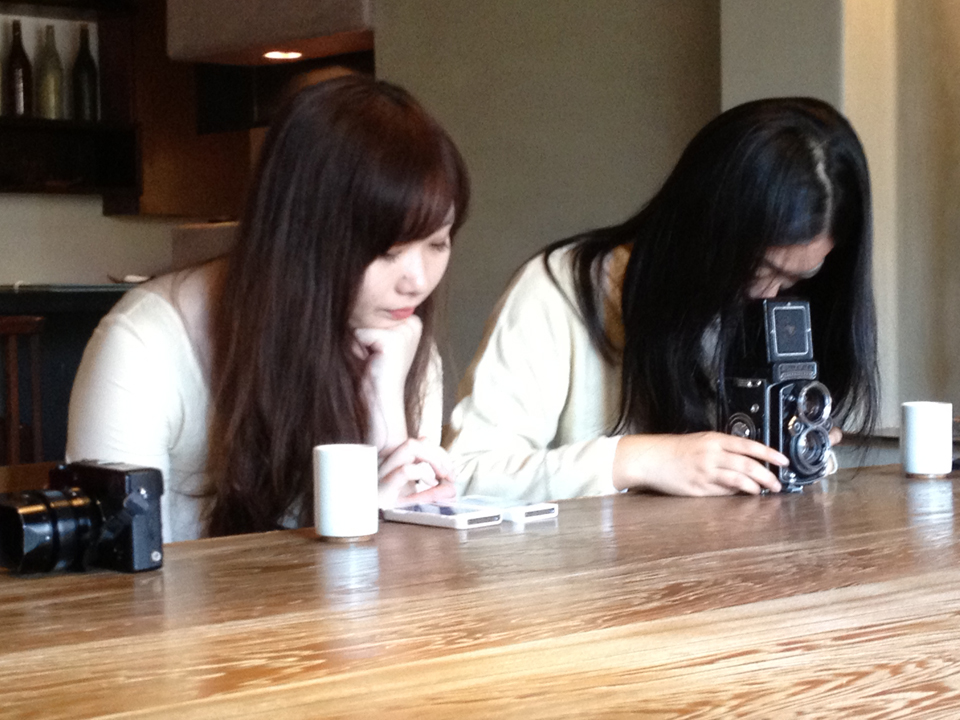 Vintage stores in Harajuku sell antique dolls and sportswear coats and dresses transformed with the addition of old fashioned lace and cut ribbons. A confirmation of the romantic trend and memorabilia.

At the traditional tea house Baishinka in the Yakumo district, two young fashionable Japanese girls are taking styled photographs with a vintage camera.

In a contemporary world where every photo, text, soundtrack, any piece of information can be manipulated, doubt reigns; therefore a desire for truth entices young people to revive the old days and obsolete mechanical objects, with antique cameras, old-fashioned typewriters, or old telephones.

As in the Sundance festival award winner movie 2010 Obselidia, a passion for encyclopedia, collectors and explorers is noticed amongst a young Japanese crowd; curiously classic! 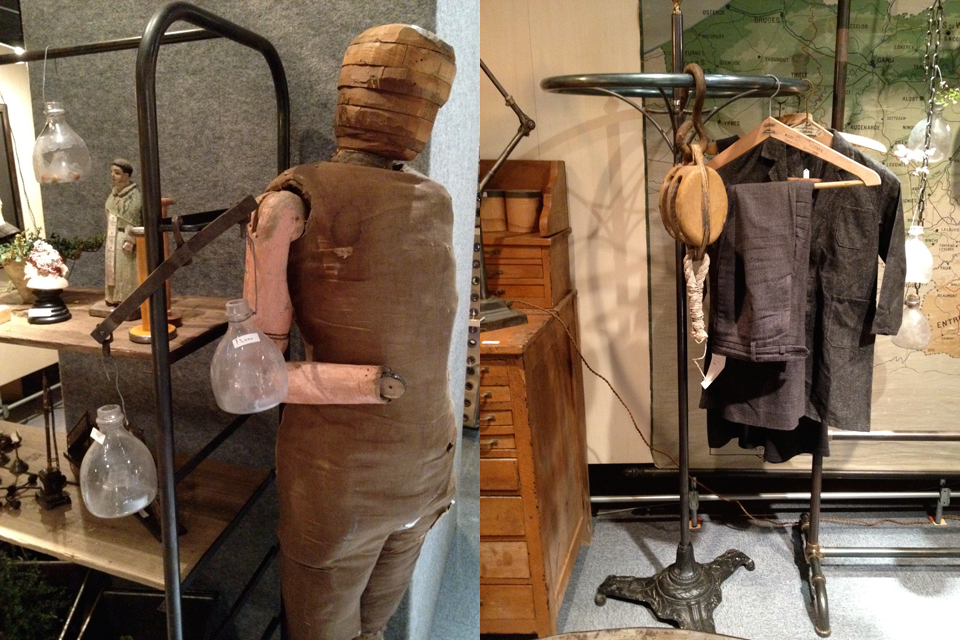 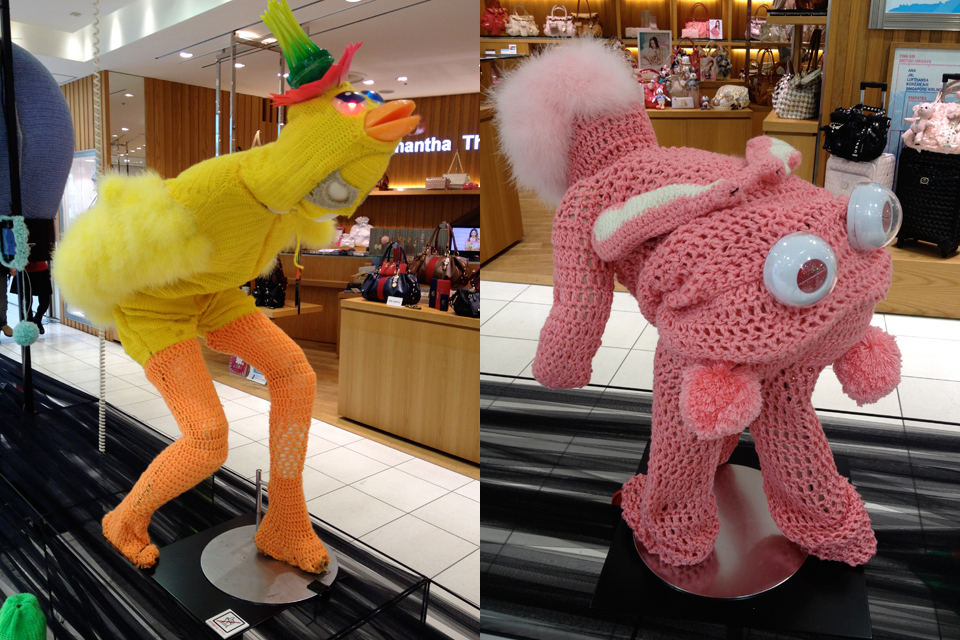 Young people feel a nostalgia for their childhood, where everything can be trusted, where superheroes always win, where fondling is everyday’s and everyone’s body language. The high-street contemporary stores are filled with babywear items for kidults who do not want to grow up. Small tight jackets witH Superman prints are worn over large brushed cotton skirts printed in pastel tones. Hybrids garments of soft pajama fleeces and fuzzy teddy bear synthetic furs are ornate with pale naive narrative patterns.

A curved inscription on a sportswear sweatshirt reads “child sheep” as a statement of childish obedience and allegiance to the world of animals who are the only ones telling us the truth.

Contemporary stores at the Parco mall in the Shibuya district display these baby garments for young adults on walls of stuffed animals with patchworked deer and rabbit heads looking like benevolent monsters coming straight out of cartoons for the very young ones.

The trend for infantilism, always strong in Japan, is taking root even deeper.

At the same time, these animal heads are mounted like stuffed hunting trophies; a butcher display of stuffed jersey meats and sausages will shock more than one vegetarian eater. Are we witnessing a current for hunting activity?

A keen interest in the Fred Perry brand shows us that school uniforms call for preppy looks. Smart dresses blend a college vintage top with cut sleeves over a ballerinatulle bottom in a hybrid look.

Americana is still strong. Navy blue and white tailored jackets and sweaters embroidered with elusions and pinned with applique rosettes and merit medals congratulate us for being best human beings in a tough crisis situation. A much needed reward trend!

White in winter invites the snow with fluffly down jackets, white boots and white porcelain jewelery.

Big down jackets in cold blue icy snow patterns make us explorers of the Arctic, and will be worn on top of wizard and fairy sparkles printed on navy starry nights backgrounds to make teenagers feel like modern day magicians. Also noticeable in fashion display, a trend for rag dolls as vintage dancers in a girls only troupe, reviving the era of swing and retro American girls bands. 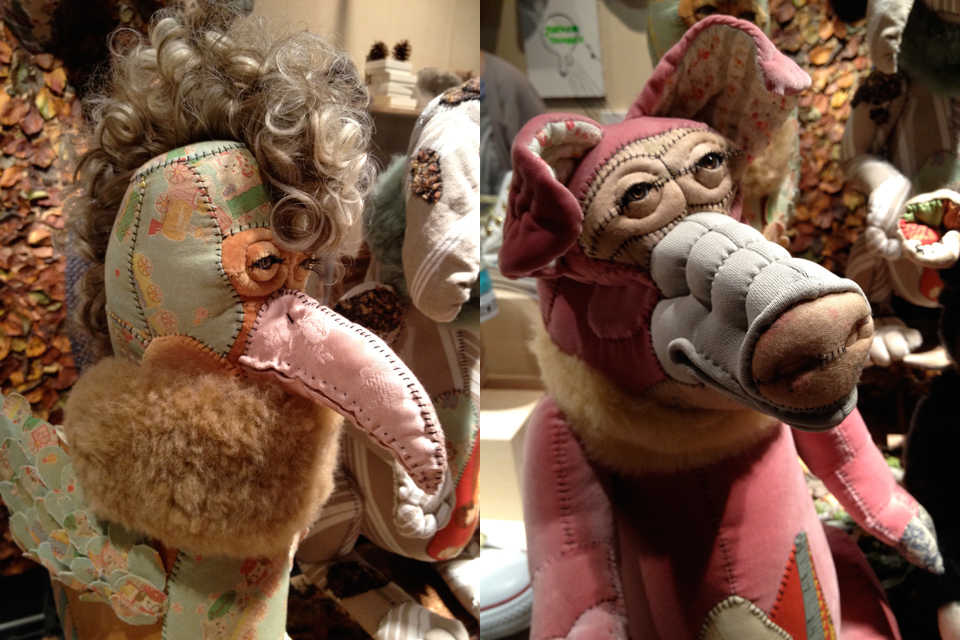 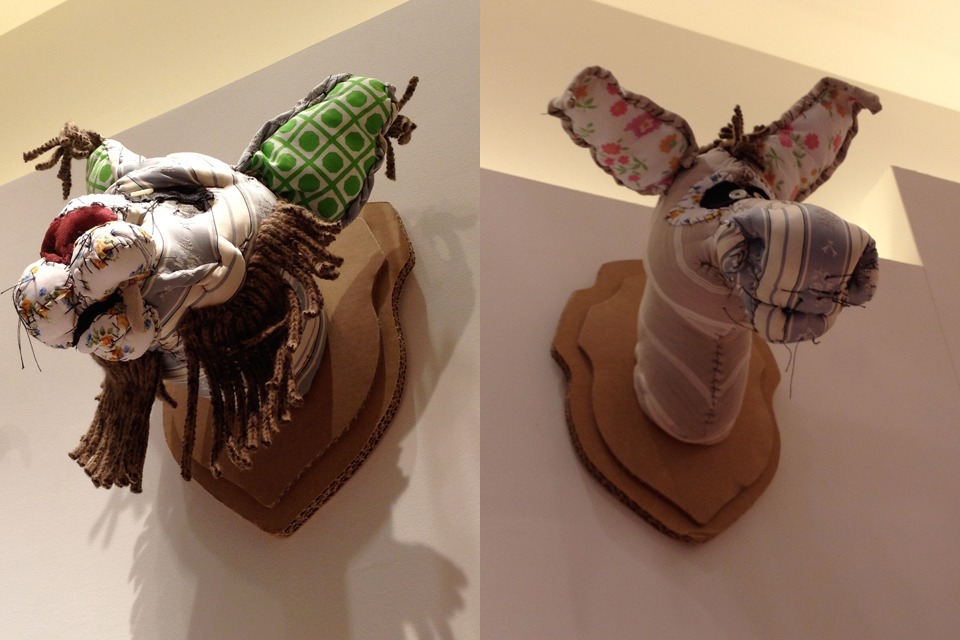 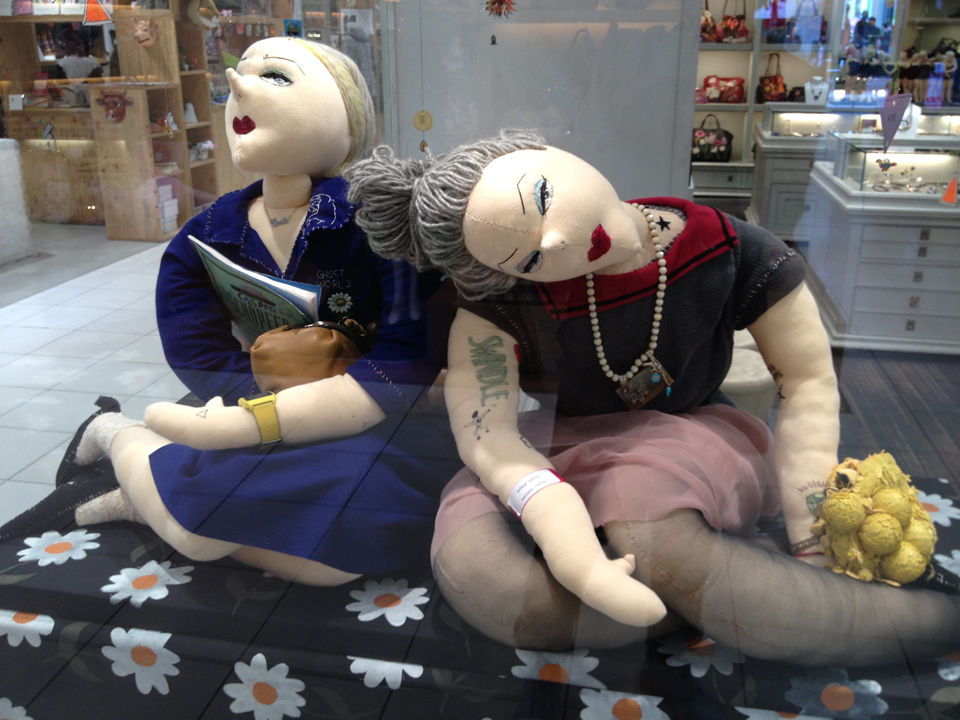 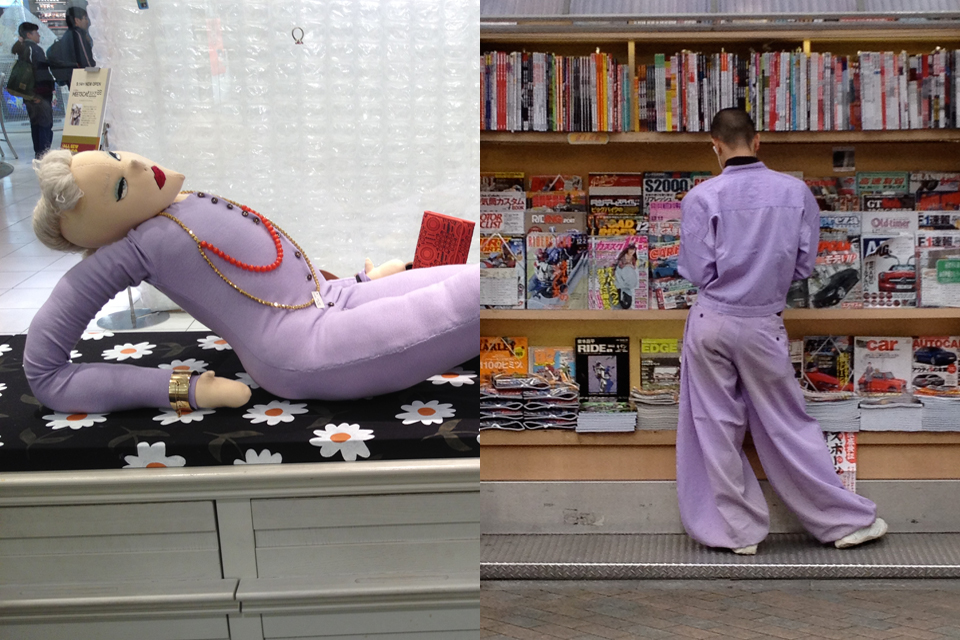 The Tokyo fair Designtide held at the Midtown building complex exhibited some interesting works such as the “Bottleware” project by Nendo for Coca-Cola presenting crushed Coca-Cola glass bottles re-manufactured into plates and serving bowls, keeping the green tone of the original bottle.

Also noticeable was a strong waterproof material made of recycled scraps of stadium roofing tarps; this material is folded like origami paper or kimonos to create wallets and soft containers preserving preciously their content. 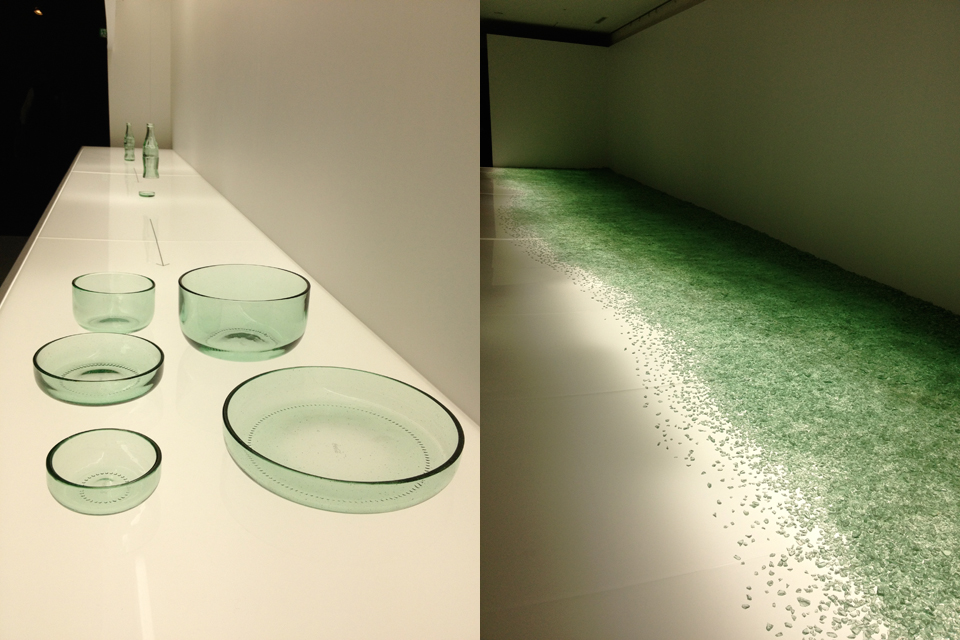 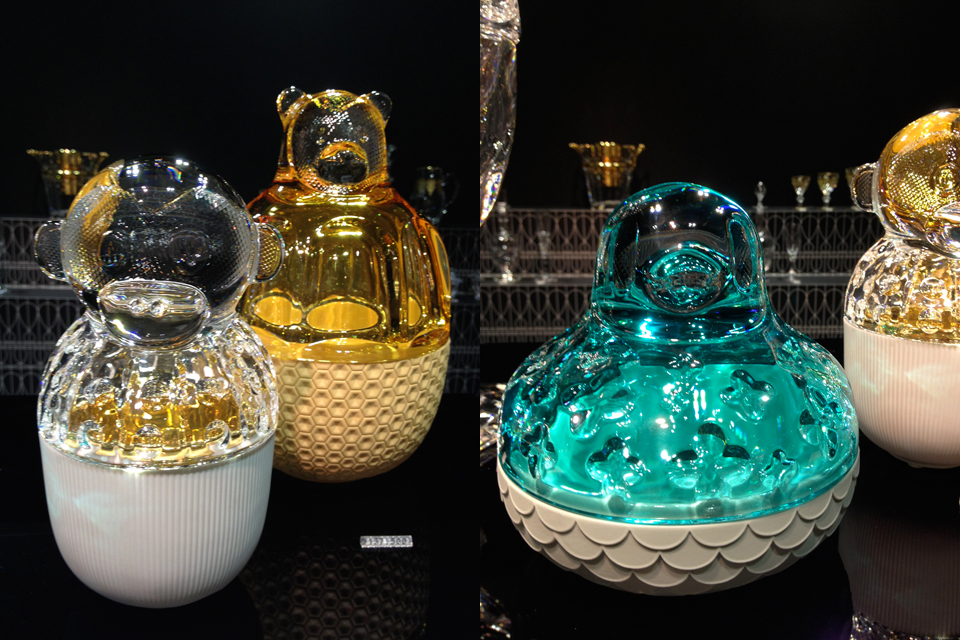 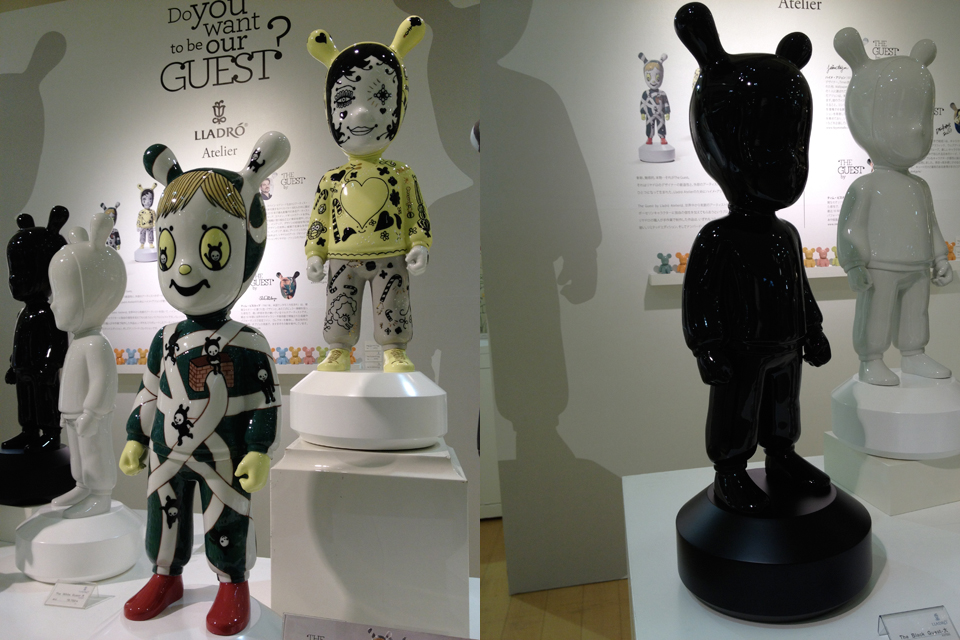 The exhibition on Ikko Tanaka, co-founder of Muji, at the 21_21 Design Sight museum, is a major curating work for graphic art & design.

An impressive collection of the master’s archives including books is on display, and I was particularly fascinated by a slideshow on Issey Myiake’s work in the 1980s representing the body in movement in the infamous savvy architectural cuts and pleats; a flowing dancing moment that highlights textile construction and pushes the human body to its ultimate wits of creativity.

An extraordinary art exhibition at the Museum of Contemporary Art Tokyo in Asakusa present “Art & Sound, a Synesthesia” curated by musician Ryuichi Sakamoto: a large blue pool of white ceramics floating by Celeste Boursier Mougenot produces a crystalline chime each time the containers collide into each other.

A video installation by Christine Odlund “Stress Call of the Stinging Nettle” shows a chart accompanied by sound of the defense mechanism triggered when the plant is in danger; chemical gases are released by the nettle leaf once attacked by a larva, warning the neighboring plants to evacuate nutrients contained in their foliage down to their root system.

A large installation by the Otomo Yoshihide Ensemble entitled “With Without Records” presents a plethora of vynil record music players stimulated by objects dangling from the ceiling, each playing in their turn.

A new way to understand the interaction between art and sound.