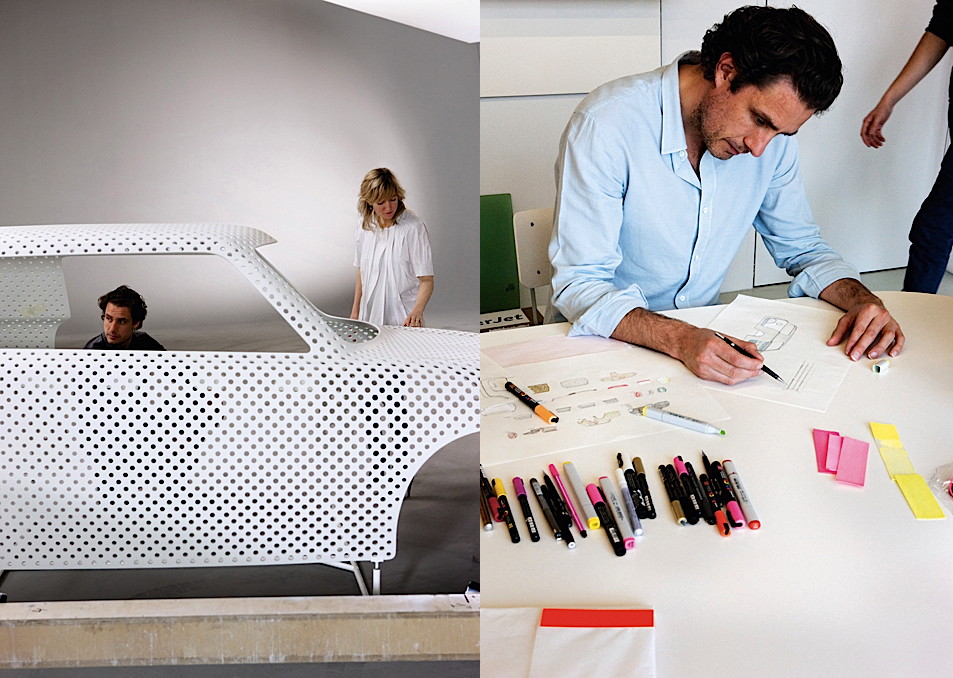 Whenever designers are asked to “do” a concept car, the implicit idea is to choose a colour, design a new textile and invent a few trims to co-brand the vehicle in order to create sales traffic; a purely marketing-driven strategy which so far has never proven to generate more income. Most of the time, luxury houses and fashion designers are requested to envelop the car body with a corporate ribbon or to change the interior into a mobile vanity case for driving females.

Therefore it is rather remarkable that when Adrian van Hooydonk, head of design at BMW, approached the designers Scholten & Baijings to formulate a new vision of the hugely successful Mini, he gave them carte blanche to do whatever they wanted; a statement about their relationship with the car, a product that somehow reflected the car, an installation around the car… everything was possible, it was an open invitation.

Van Hooydonk knew little of what was going to happen, he clearly underestimated what he was doing. Throwing such a bone to the two designers was not a wasted effort and straight away, Carole and Stefan went to work gnawing at the bone, toying with the bone, and treating the bone as a fetish object to understand its ritual properties, until the Mini was stripped bare – at once nude and beautiful.

Like eager kids, they tinkered with the car and took it apart to the very last detail, undressing the Mini as if it was an onion and peeling away layer after layer: from the coloured layer to the protective layer, to the textile layer, to the final motor layer, until the car became of a strangely powerful essence, able to accept and endorse the different design interventions that would reconstitute it. The extreme minimalism of the Mini became palpable. Bare and fragile, the little car stood in front of them, endearing to them with its entrails and inner workings, begging them to be clothed in a better dress and coloured in a different colour; to be given some accessories also, inviting them to be audacious in their reflections on what makes a car for the future.

With their signature curiosity, the designers started to ask elementary questions such as why is a wheel a wheel and produced in so many facets, why is the door as heavy as it is, and why does colour have to be solid? Why do windows have views and why are the fabrics neutral? Why does a car still seem to be the same car after so many decades? They grabbed their chance and decided to draw a sketch they didn’t have to test drive, to narrate a draft that didn’t need to tell stories, to master a blueprint that didn’t need to be realised. They created a one-on-one sketchbook for a car where the process was the design laid bare. For the sake of research, they chose for abstraction.

Colour was going to be given through material and texture, details were going to be singled out for their design beauty, wheels were chosen as icons, the interior would be folded out of one piece with a personalised interface for sound and display.

The bumpers would be subjected to fluorescent pigment, thus behaving almost as art objects.The doors would be reconstructed from gold-sprayed crinkled cardboard, and all safety belts woven in gold and soft pink geometrics. Furthermore, concerned with space and efficiency, the designers created huge nomadic pockets that can be attached with magnets for storage, and become luggage at the same time. Needless to say, these items profit from the same colour accents that are distributed throughout the rest of Scholten & Baijings’ design process: the inner door is gold, the outer hue a greyish blue, the bumper a vivid fluorescent and the dashboard powder-coated in bright red, as if their Mini is a woman putting on some blush. The outer shell is transformed with porcelain lacquer, perforated by a myriad of tiny little holes to create an organic system of ventilation and to experience fragrance from the sides of the road, influencing and enhancing driving pleasure.

The chairs are streamlined and made ultra-thin, to give a much bigger sense of space in such a little car body, covered in woven canvas designed using fluorescent accents and soft grey leather that is embroidered with metal yarns so that it looks like armour. All textiles and samples were executed in the designers’ own ateliers, where all ideas are creation. Scholten & Baijings firmly believe that the design process is not just a thought process yet also a work in process, enabling them to learn from making and the using of hands.

They do not follow the rules yet question them in order to come to innovation.The steering wheel is moulded in a single piece of broken white, bone-type plastic while the wheels are completely reinvented to become solid, made within one process using transparent synthetic matter and rubber tires; why had the tire industry never been questioned so ever before?

Herein lays the strength of the project: in one continuous process of observation, the status quo of what a car and its components are is investigated, delivering reflection and research for years to come. Scholten & Bajings have defined their Mini as a driving laboratory, a cutting edge vehicle on the road to other yet unknown destinations. Honk! Honk! 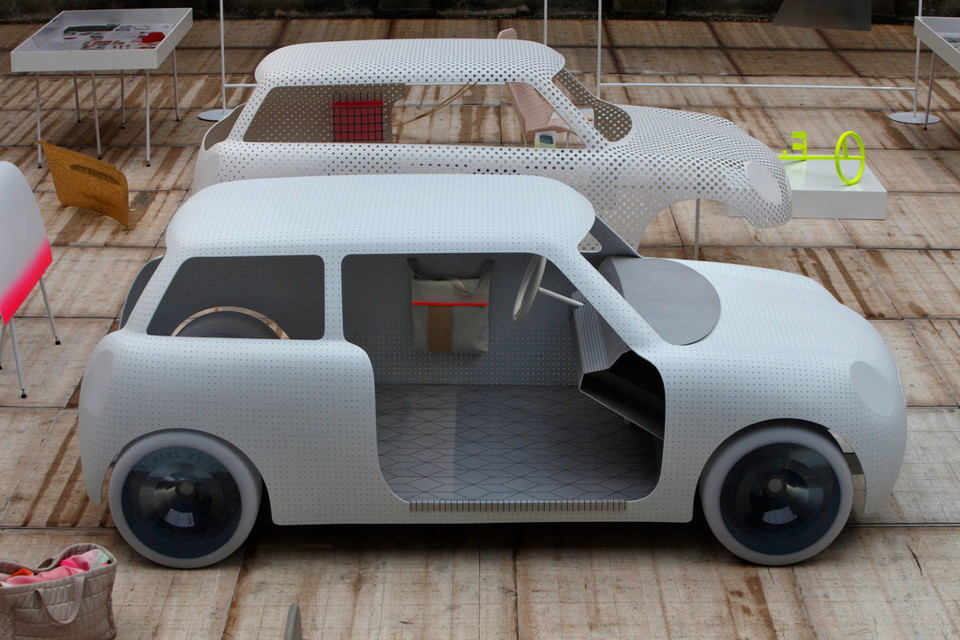